Today I wanted to share one of my very favorite recipes – twice baked potatoes!!  I actually blogged this with an old blog literally 6 years ago.  I happened to find it and thought it was fun to see my old writing so decided to share it, just with new photos. (Note, I used 6 potatoes in the photos, but the recipe is for 4 potatoes).  Hope you enjoy <3

I have had some requests for more recipes, so here is one of my all-time faves.  I have to thank my own mom, Terri, and my mother-in-law, Vicki, for making their own delicious twice baked potatoes for family functions for the past few years. I say the past few years, because of my ridiculous eating antics, I always turned my nose up at twice baked potatoes.  I remember my dad and sister would get the frozen ones sometimes and heat them up in the microwave as a snack and I just thought they were probably the most disgusting thing ever.  Nevermind the fact that I liked every single other form of potato, I simply couldn’t be bothered by the thought of a twice baked potato with sour cream, cream cheese, and whatever other craziness was in there that I don’t eat.  Yes, it’s true, I eat bagels without cream cheese, and regular baked potatoes without sour cream.  I have never felt the need for them since I have a hard time branching out in all areas of food 😉  So there comes a time when we are celebrating Christmas over at my in-laws and my mother-in-law makes a lovely meal and I start having a mini panic attack at the thought of having to eat those wretched things.  I am discussing this on the side with Eric and he tells me to just try one bite because he thinks I’ll like it, and if not, he will personally make me something else (if you have children, I’m sure you have used this same trick).  Well, needless to say, I tried them and was hooked!  It was like a little slice of heaven in every bite…I probably even stole some of his when it was all said and done.  From there, I asked both Vicki, and my own mom (who has been trying to get me to eat them for years) how they made twice baked potatoes and took their little tricks and combined them into one recipe over time.  They are so not as hard as they seem, just a little time consuming.  But it’s worth it.  And they reheat really well too – from both the refrigerator and if you freeze them as well.

You will have to forgive me because this recipe will just be guesses at what the actual measurements are because I don’t measure anything when I cook (unless it’s a Julia Child recipe, which I consider almost Holy and will not deviate from).  Today, I am going to give you the recipe for how to do this in a batch of 4, so feel free to double it up or scale it down accordingly.  No matter what, even if I am just making these for 2 people, I always make 4.  It’s really just as easy to make 4 as it is to make 2, and again, I will put them in the fridge for a dinner later in the week and just reheat them at 350 degrees for about 30 mins or I’ll throw wrap them in saran wrap and put them in a ziplock container in the freezer.  On the day that I want to eat them, I try and set them out for a while beforehand, but often times I just put them directly in the oven at the same temperature and for about 45-50 minutes (could be longer if the potato is bigger, however.  Just stick a fork in one of them and see if it’s hot all the way through, if not, just keep them in a bit longer).  So here goes nothin! 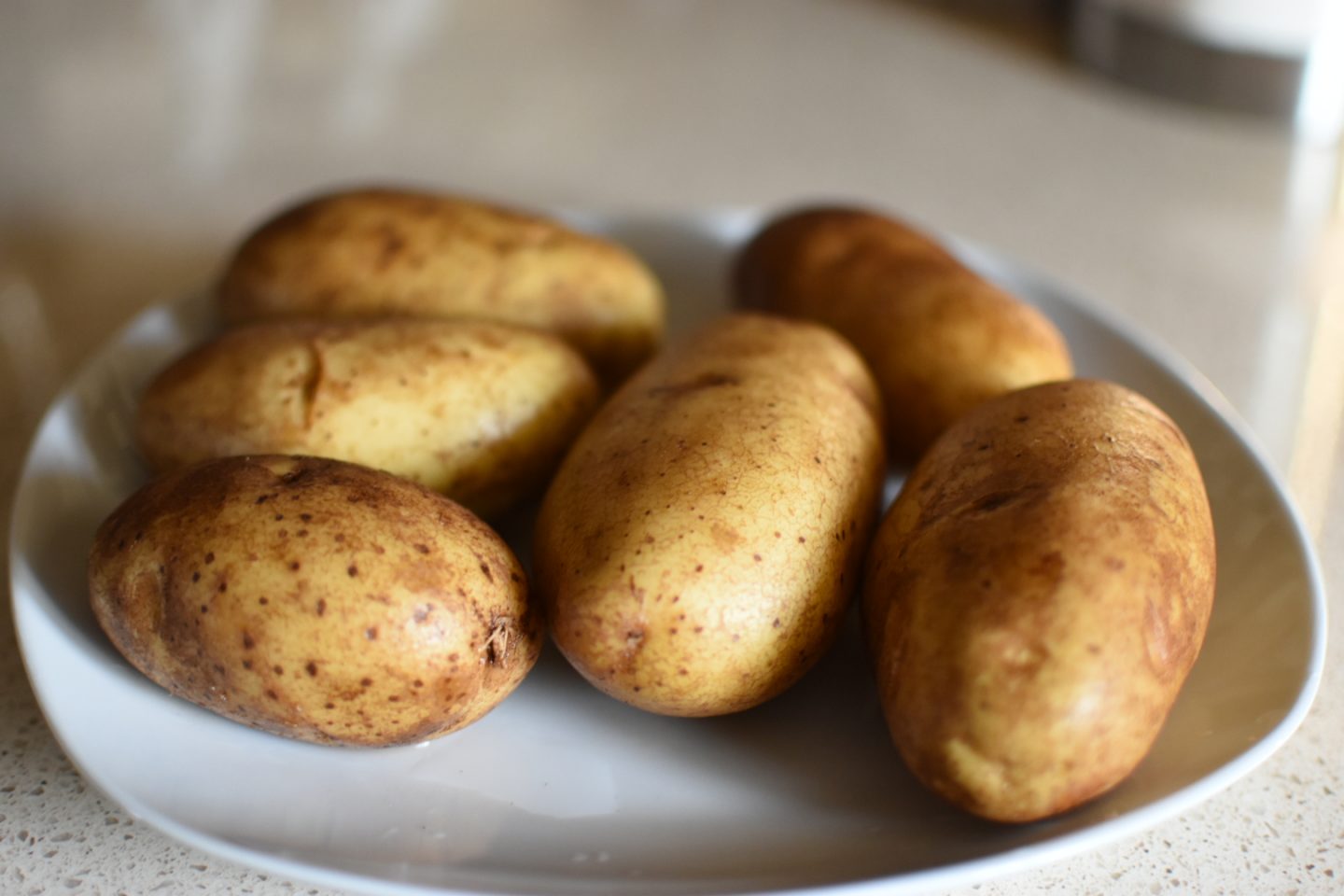 Take 4 medium baking potatoes, rinse them and poke holes with either a fork or a knife on both sides of the potato. Pop them in the microwave on a plate for 15 minutes. Do this in 10 minute increments and flip them over each time so they cook evenly on both sides. Preheat your oven to 375 degrees when you put them in the microwave so it’s all ready to go when you are finished microwaving them. Then set them directly on the upper rack in the oven (after they have finished pre-cooking in the microwave) for about 30 minutes. You want the skin to feel firm and crispy when you touch it, but the inside to not be firm. So basically, a fully baked “baked potato.” 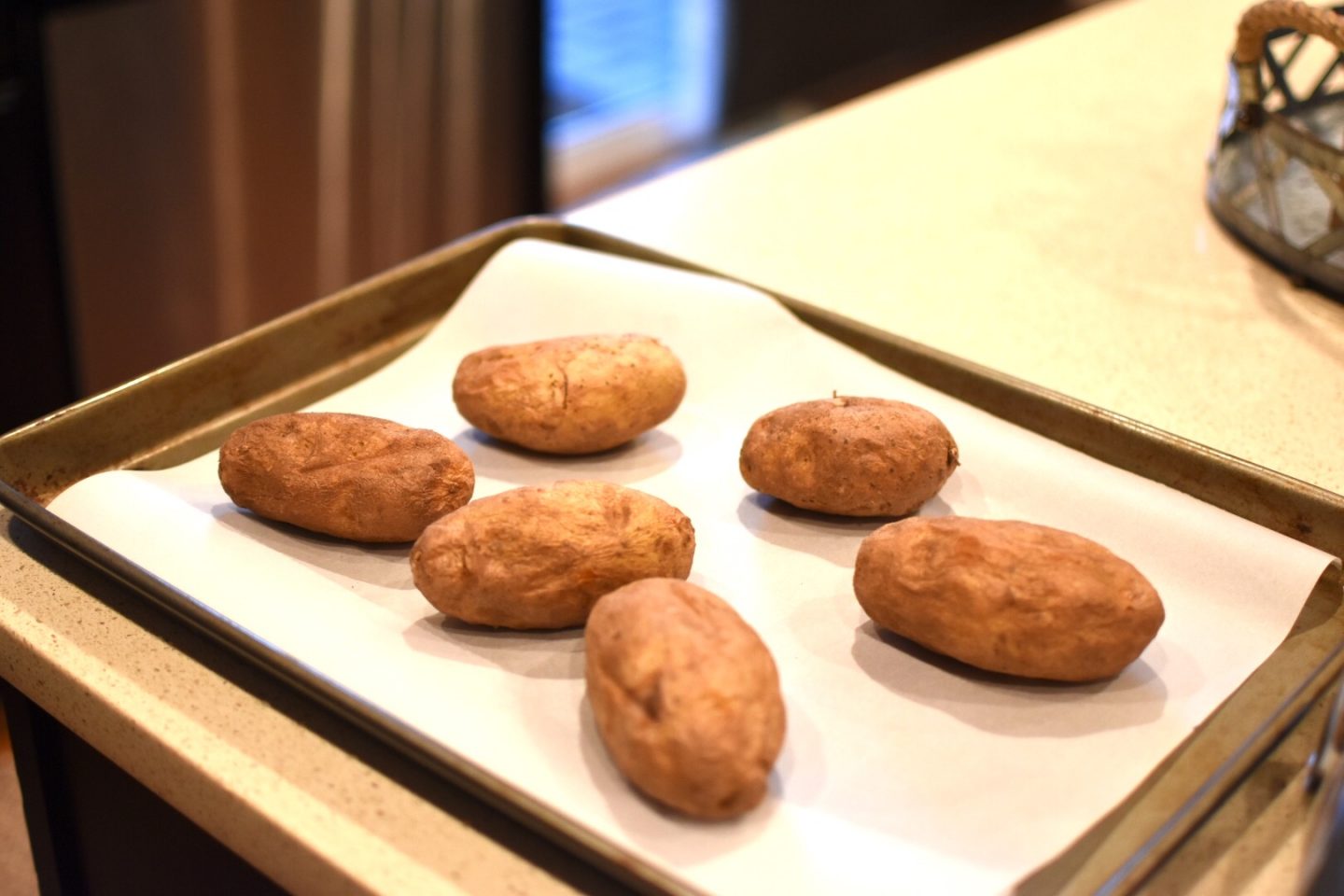 Then get the following components ready while your potatoes are baking: a large bowl, hand mixer, a baking sheet lined with either parchment paper or aluminum foil, 3 tablespoons of butter (real or margarine – either will work so don’t worry if you only have one or the other), sour cream (I use reduced fat generally, and the taste is just the same), and neufchatel cheese (this is a version of cream cheese that is 1/3 of the fat but somehow more delicious – you can find it next to the regular cream cheese at all grocery stores. Don’t fret if you can’t find it, just use whatever you have or you can find). Also, cook off 4-5 pieces of bacon, depending on how much bacon you like (I think more bacon is always better, personally). I cook mine in the microwave on this because it is super easy and way easier to clean up than traditional bacon cooking methods 😉

Then put the three tablespoons of butter at the bottom of the large bowl because you are going to start to put the hot potatoes over that butter and get it melting. When the potatoes have finished baking in the oven, take them out and put them on the sheet tray. Use a sharp knife to cut a large circle at the top of the potato. Scoop out all of the potato that was on the top of the skin that you cut out, as well as all of the potato in the rest of the skin. (easiest way to do this is to use an oven mit and hold the potato in that hand and scoop with your free hand – this way you are not burning the crap out of your hand trying to hold the potato that’s been cooking in the oven.) It should look like this once you have scooped out all of the potatoes. Use your hand mixer on a low setting until the potatoes are as smooth as they can get. It’s ok to have lumps here because you aren’t adding any more liquid into the potatoes. Just make sure you mix them on low at first, then you can pick up the speed after about 30 seconds or so if you are trying to hurry it along. 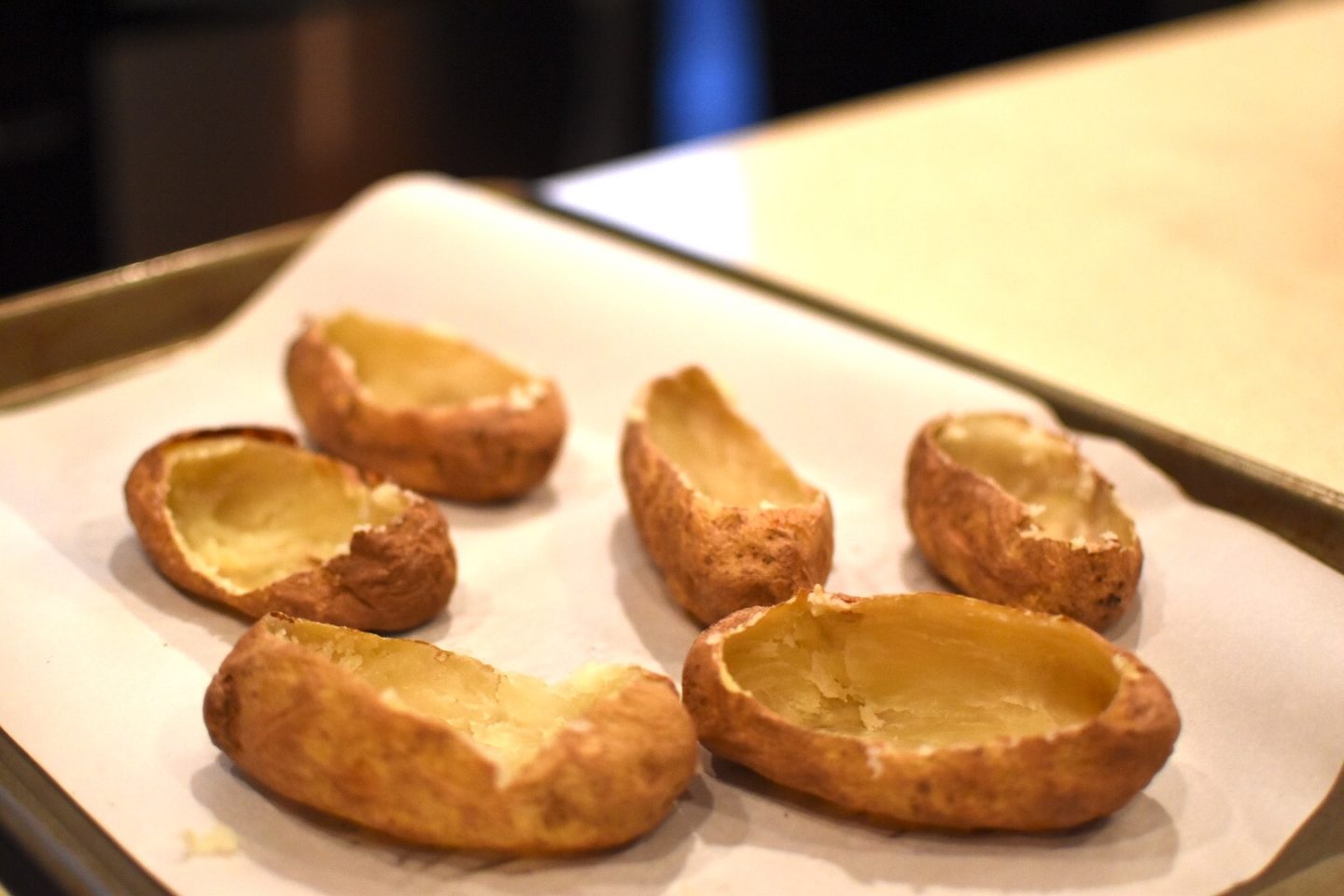 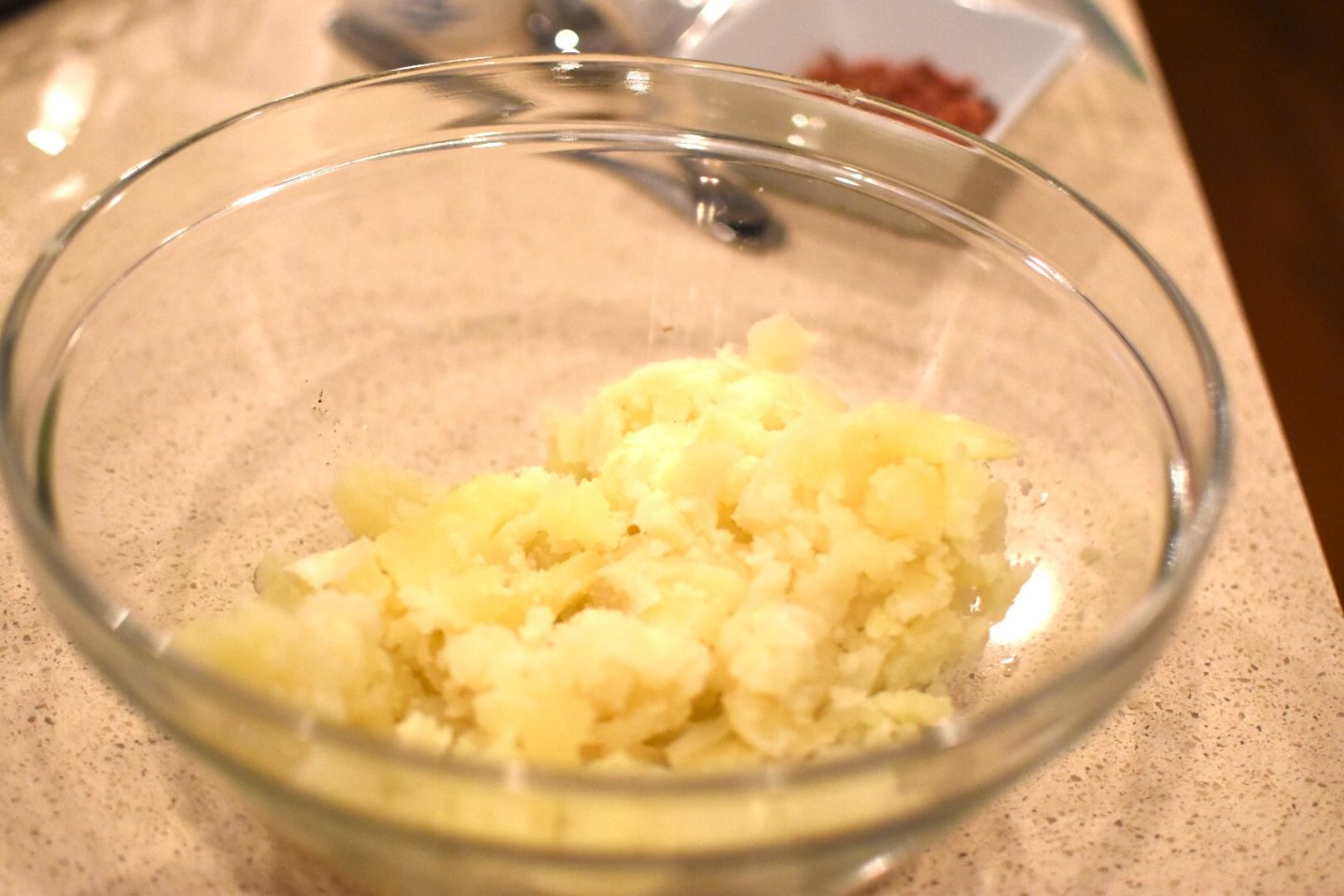 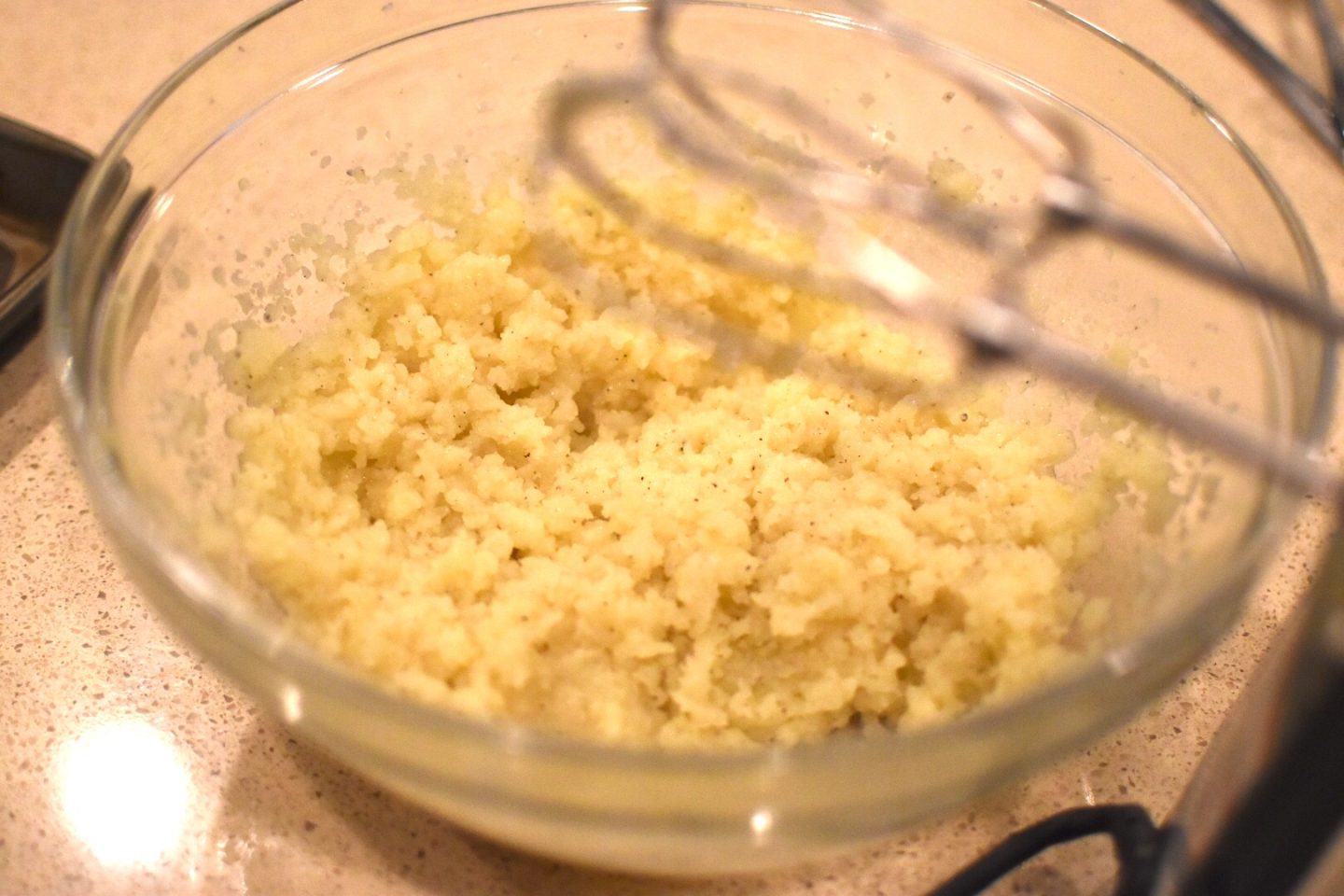 At this point, you are going to add in salt, pepper (both to your taste level), 2 tablespoons of the sour cream, and 2.5-3 tablespoons of the neufchatel cheese. Mix these together thoroughly with the potatoes until it’s evenly combined. You can do this at a medium speed with your mixer. 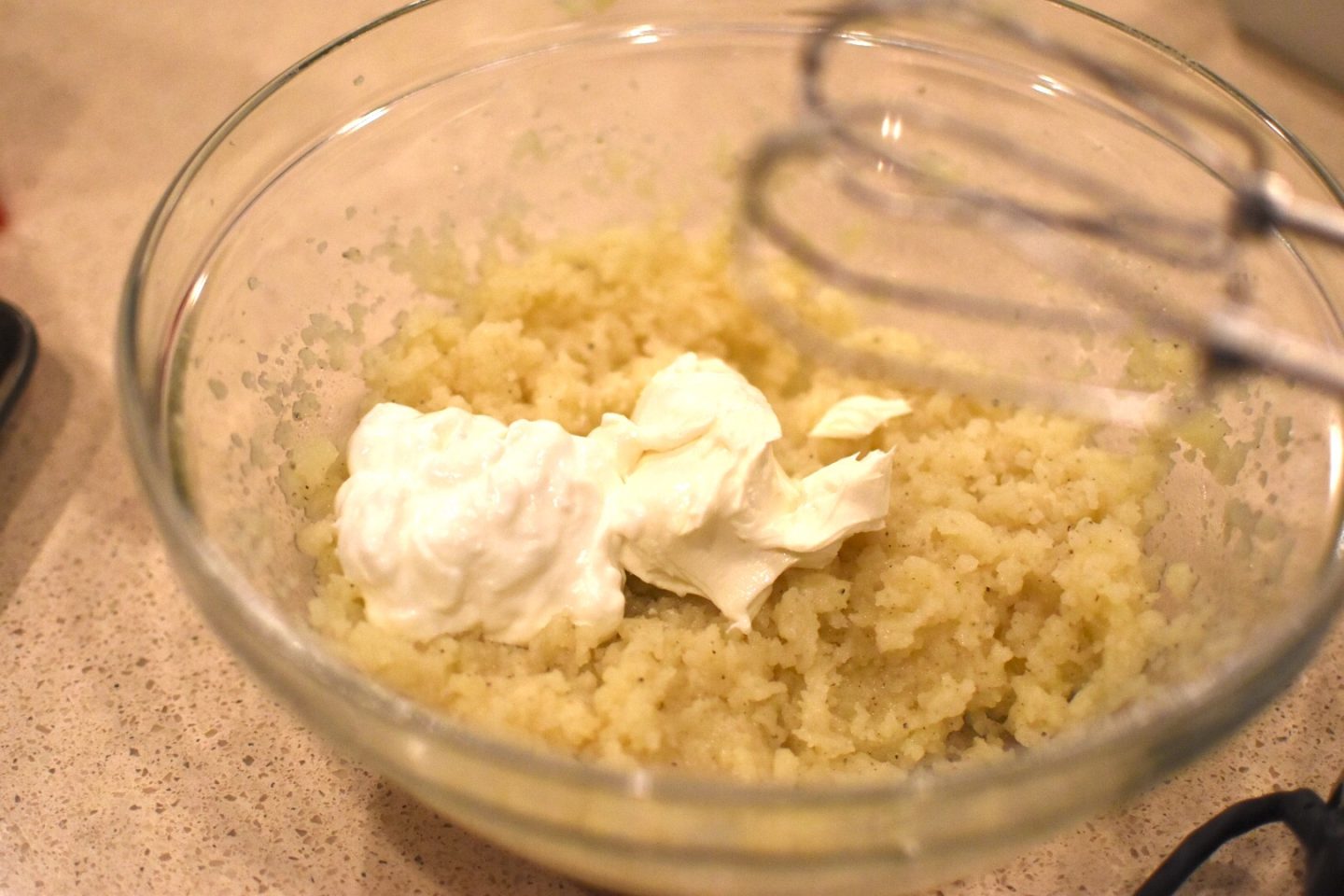 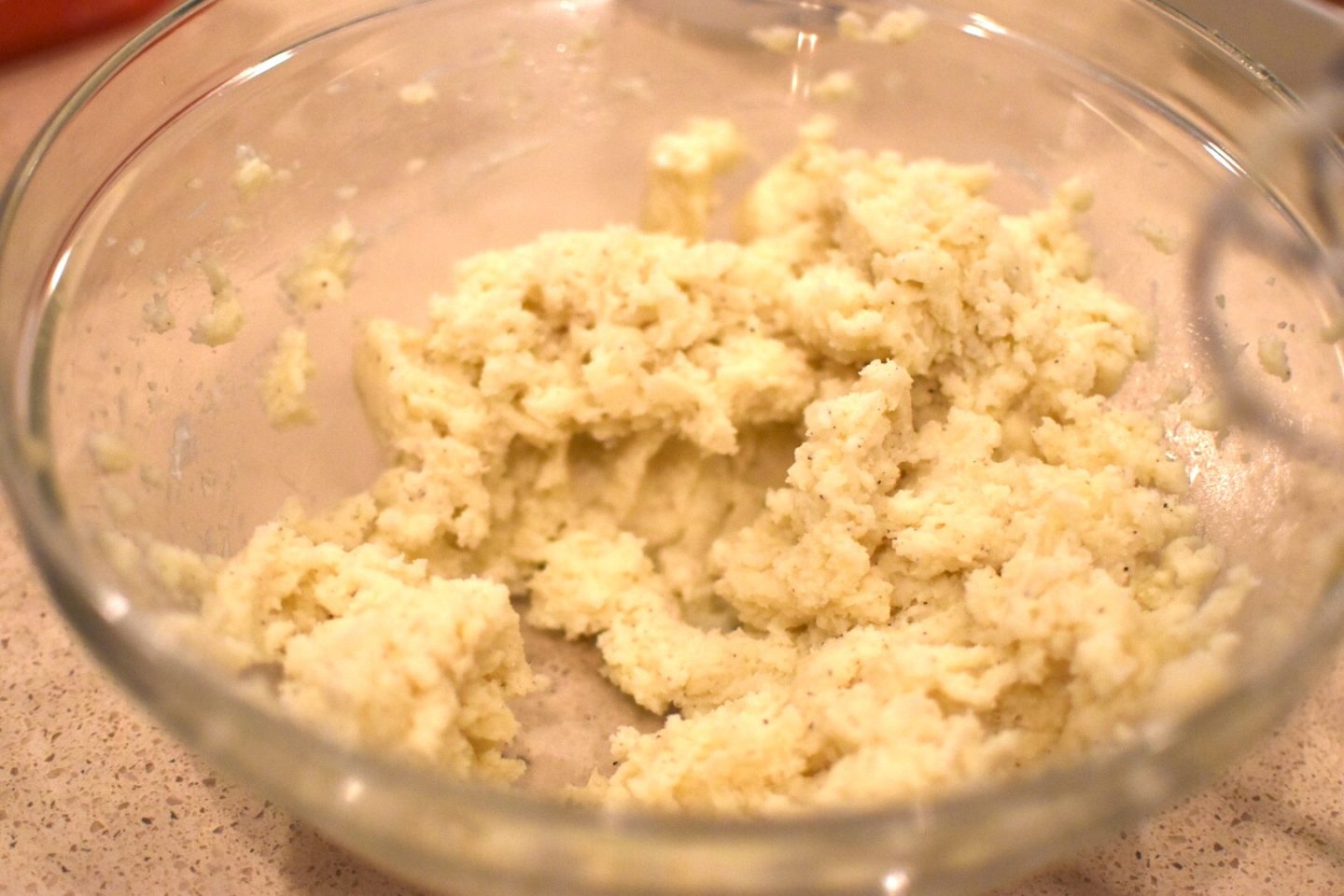 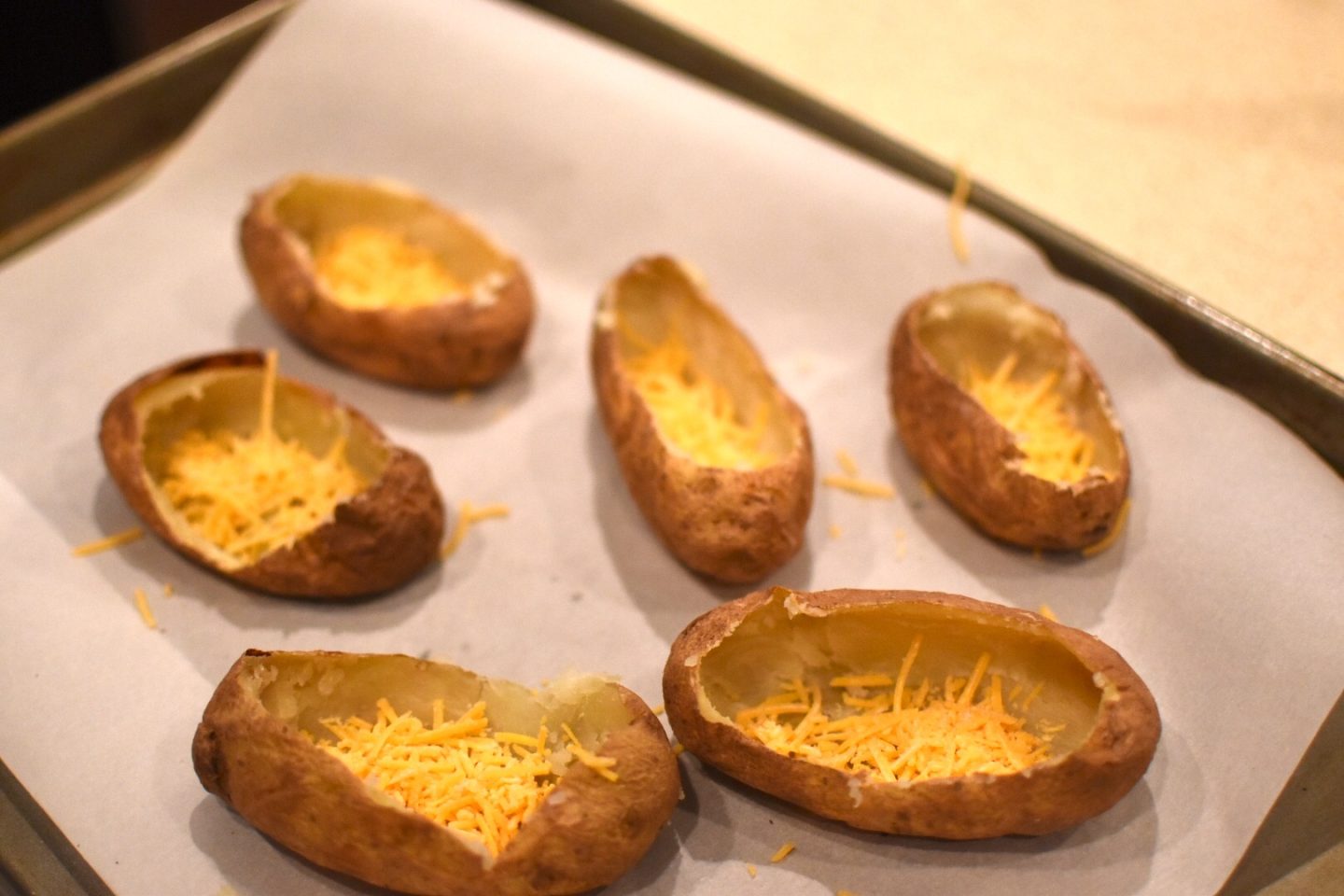 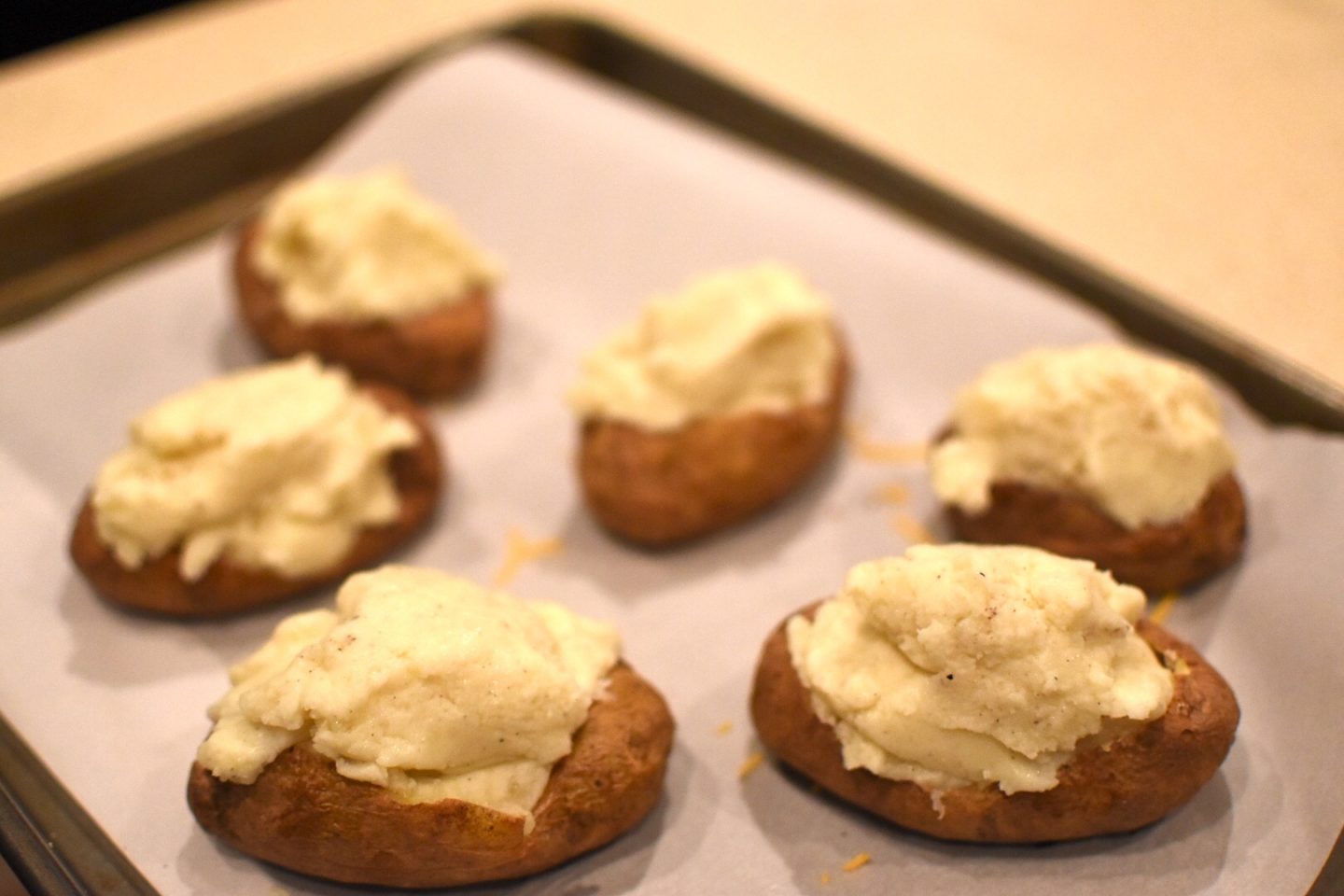 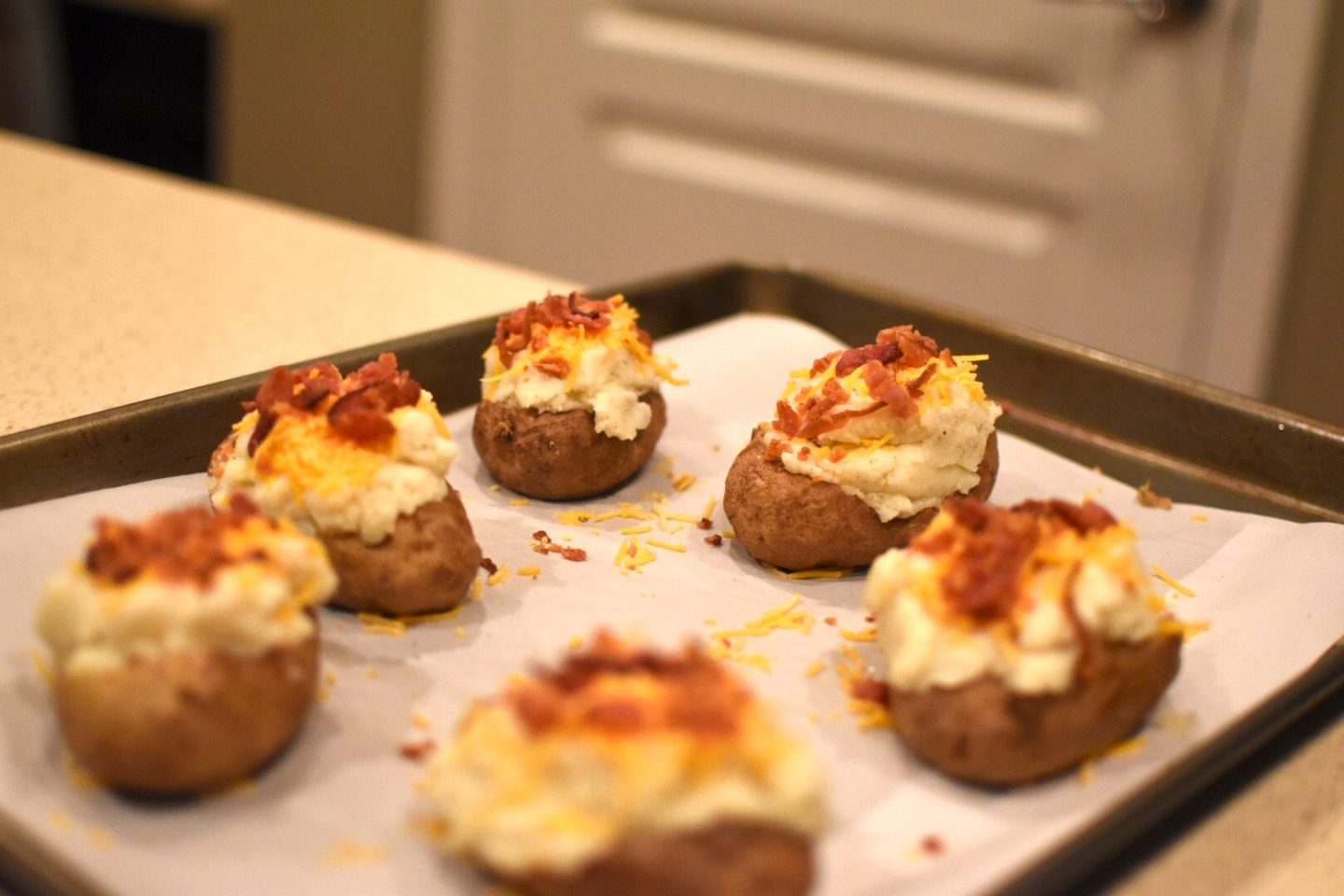 (Prior to baking above) 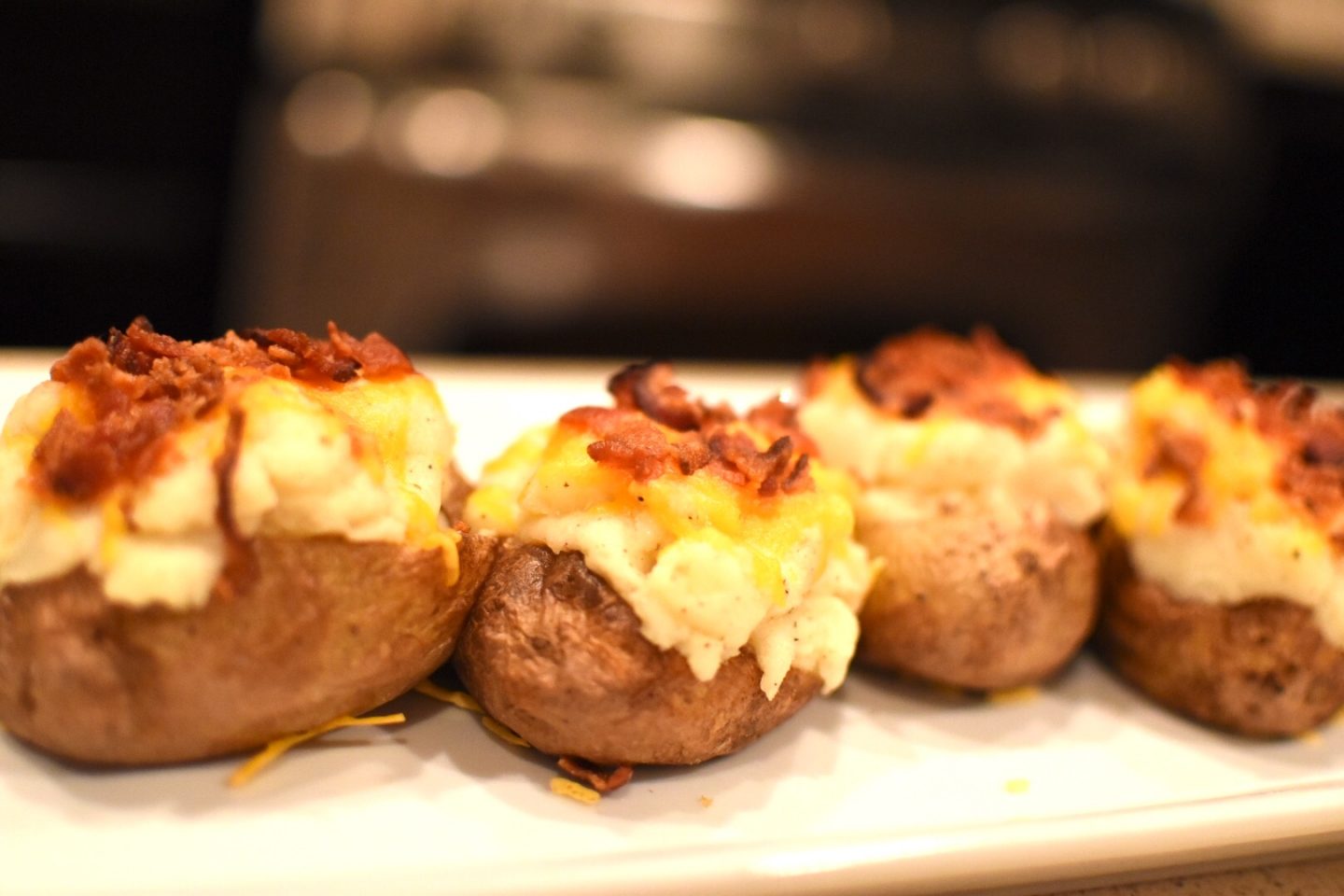 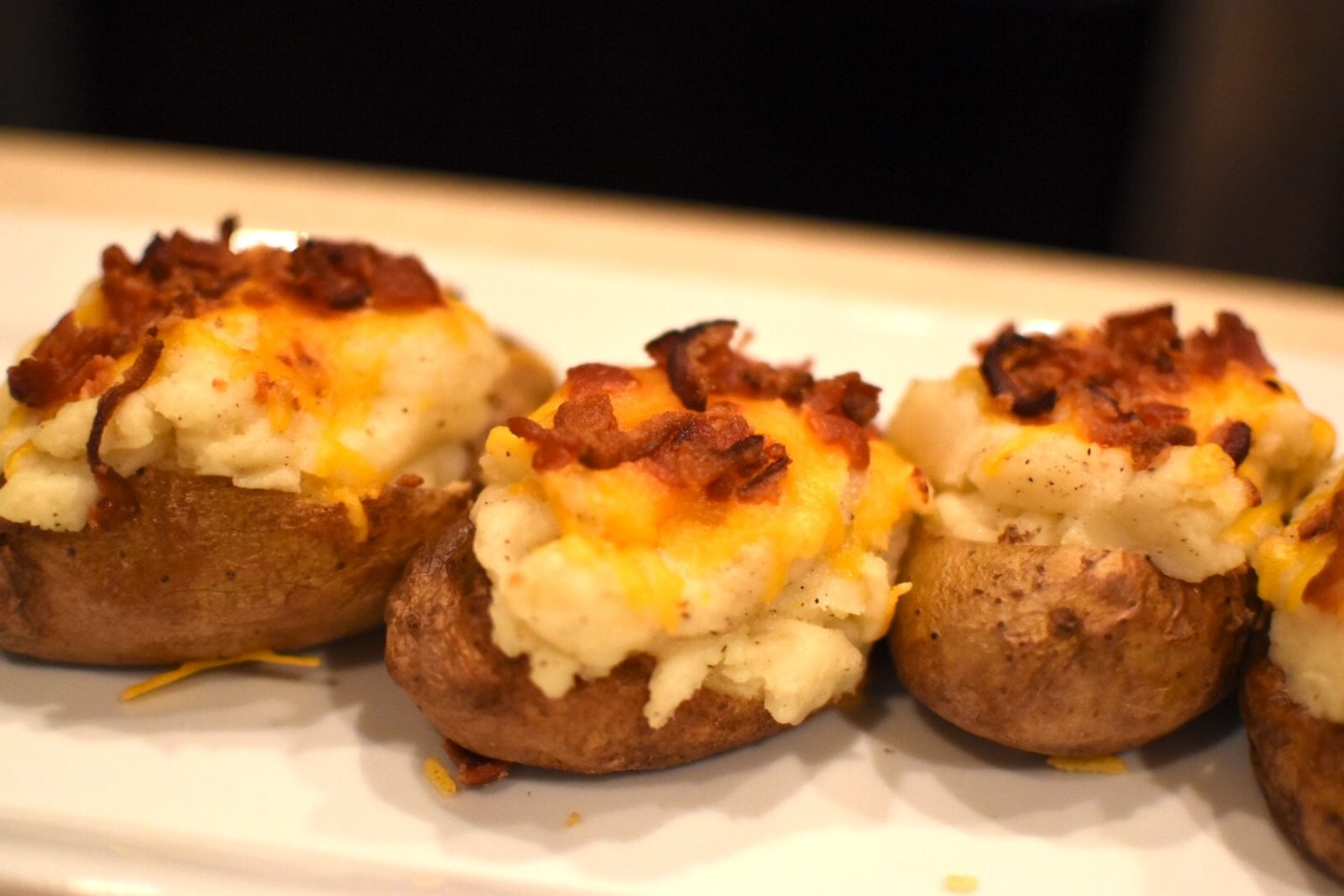 After!  The crunch of the bacon and the cheese being nice and melted running through every bite because it’s also on the bottom makes these potatoes SO good.  Enjoy!