I don’t know about you, but sometimes I just don’t feel like putting a ton of effort into making dinner…  As you have probably gathered from this blog, I really love to cook.  But there are days that I just don’t want to have to think about what’s for dinner.  Days that the baby’s barely napped, I’m behind on laundry and work, and in the free time I did have, the only thing I manage to accomplish is to shower and slap on some eyeliner.

Side note – you know what’s incredible about a 9 month old?  They eat real food 3 times a day.  Three times.  (And my little booger nurses about 4 times a day on top of it).  So I feed a child 7 times a day. Three of those times, I have to clean her up, her plate and bib, her tray, and the floor.  Three times a day that happens.  (And if you’re already a parent, you’re like “duh, Tess” – but it’s definitely been an adjustment in my day).  I thought nursing 8-10x a day was time consuming — but this is far more, especially with making all of her food.  I was so excited for her to be eating like a big girl (and I still am, and am really proud of how well she eats and it’s so cute to see her feed herself)… but this real food thing is no joke – it takes quite a bit of time out of my day, and some days she takes foreverrrrr to eat.

So you can see how time can get lost and all of the sudden it’s time to eat dinner and I don’t have much time or energy to make anything.  So THIS is my go-to.  This is the easiest chicken you will ever make.  I tend to make this shredded chicken in the crockpot every couple of weeks so I just have it on hand.  (I even freeze some of it, once I season it up and cook it down into my Mexican chicken concoction, which I’ll explain further down).  So this chicken 3 ways is 1. plain (to put on salads, pizza, give to your child, etc.), 2. barbecue, and 3. Mexican.
People often ask me crockpot ideas and easy weeknight meal recipes, and I don’t have a ton, but this one, I swear by.  So here it is! 🙂

Here’s all you’ll need for the basic version: 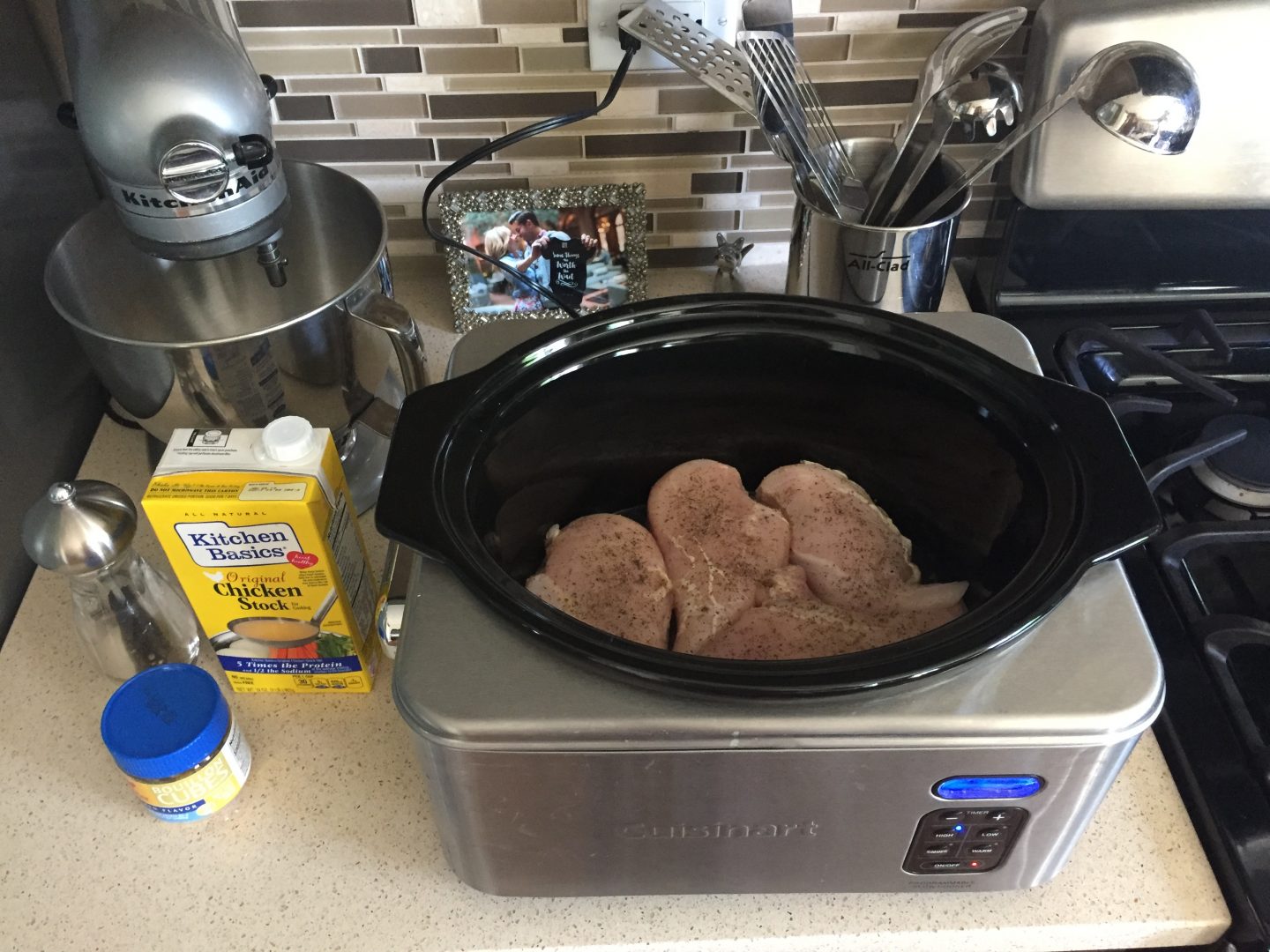 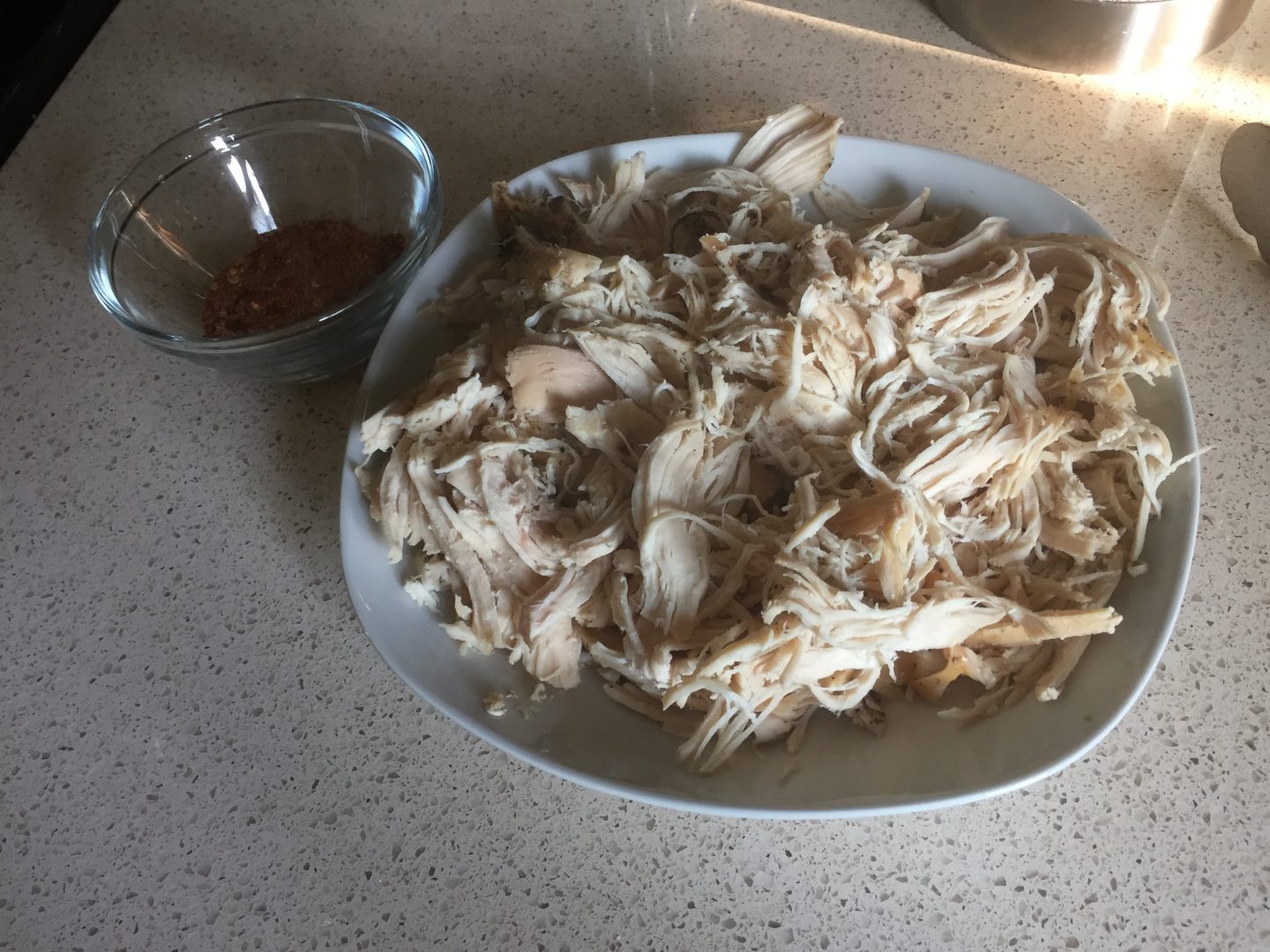 My daughter LOVES the plain shredded chicken so it’s a great way to have protein with her meals.

The next version is my spicy Mexican chicken mix.  It’s not too spicy, but I use it for enchiladas, quesadillas, tacos, and nachos.  Basically, you take the cooked shredded chicken, add about 4-5 cups of water and the seasoning mix and cook it down so that the seasoning gets into the meat.  Below is what I put into mine, but a far simpler way to make it is to just use a packet of taco seasoning and cook it down in the water.  I like the different flavors in mine, but if you don’t want to measure anything out, just use the pack of taco seasoning (and add a little cayenne pepper if you want it spicy). 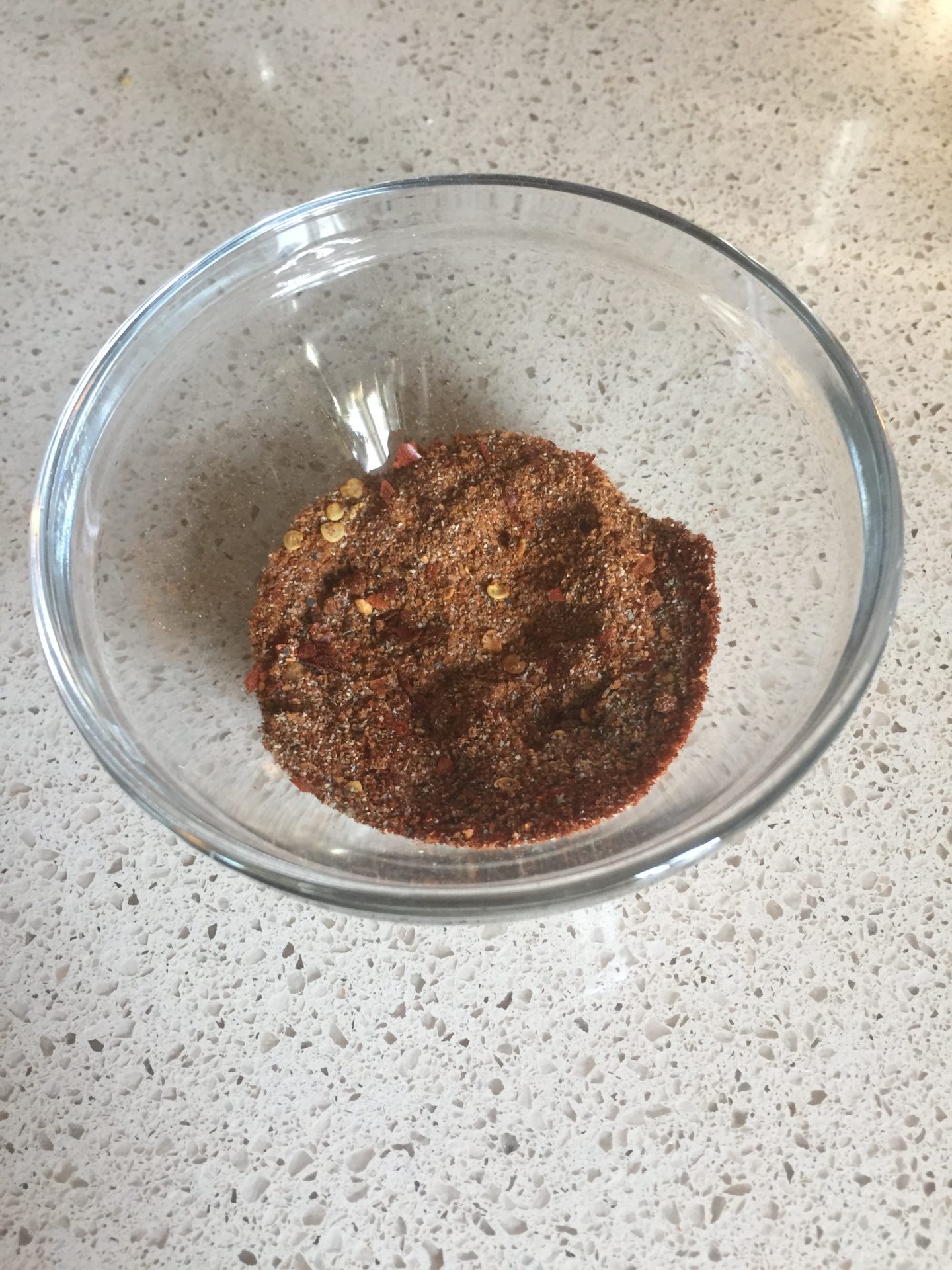 Cook that on high in a small pot until almost all of the liquid dissolves.  This doesn’t need to be babysat but takes about 40 minutes, stirring occasionally. 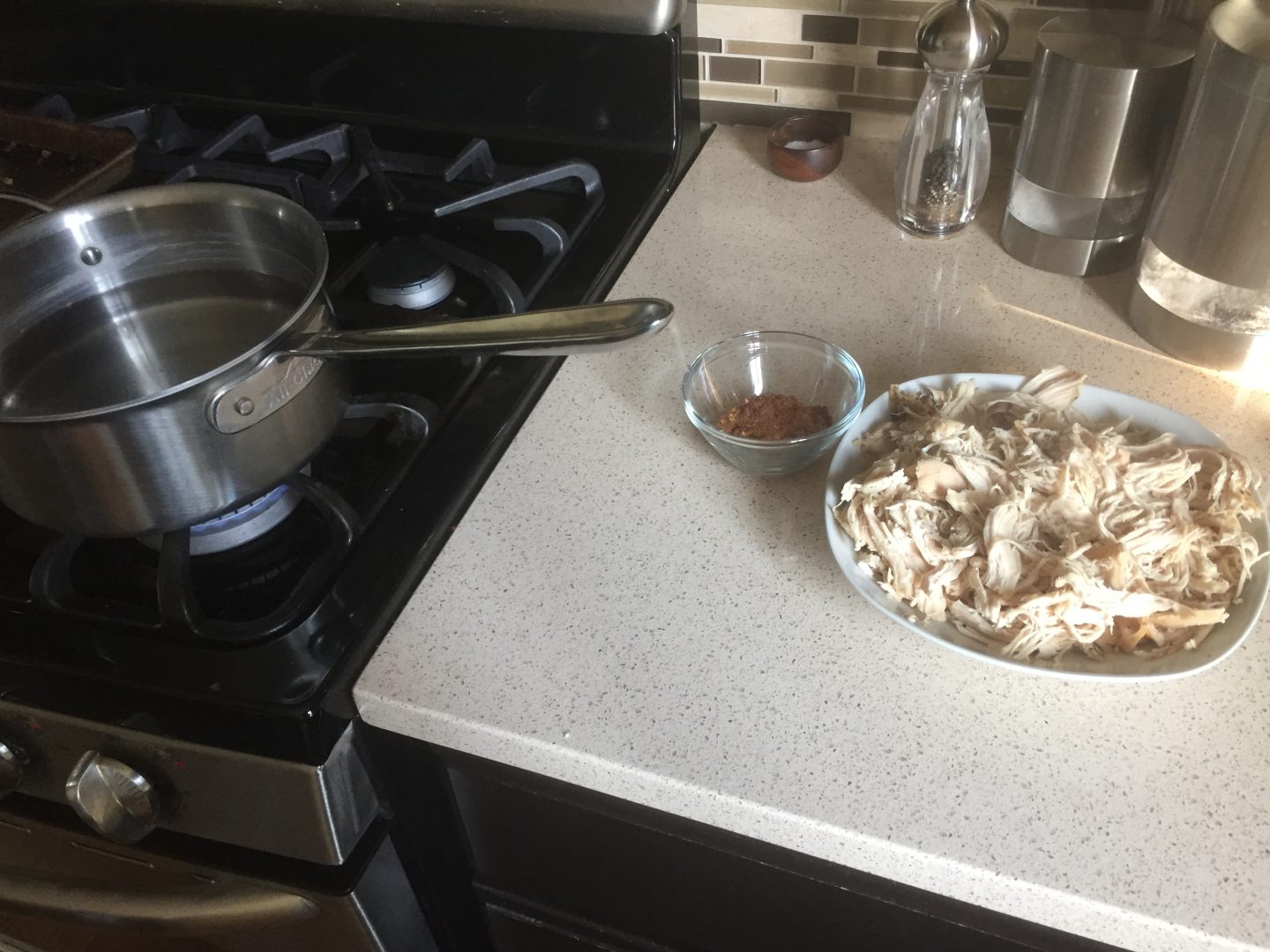 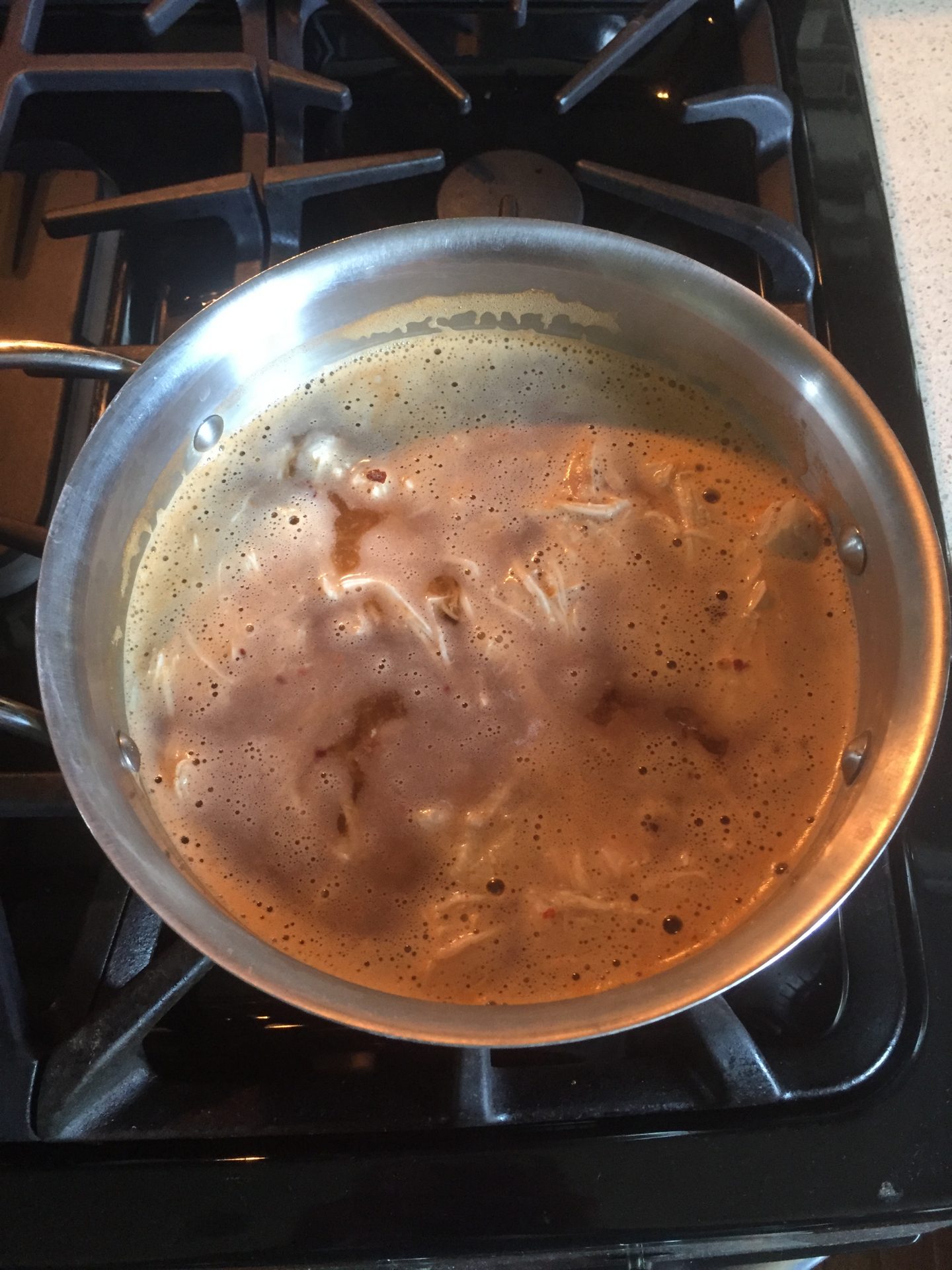 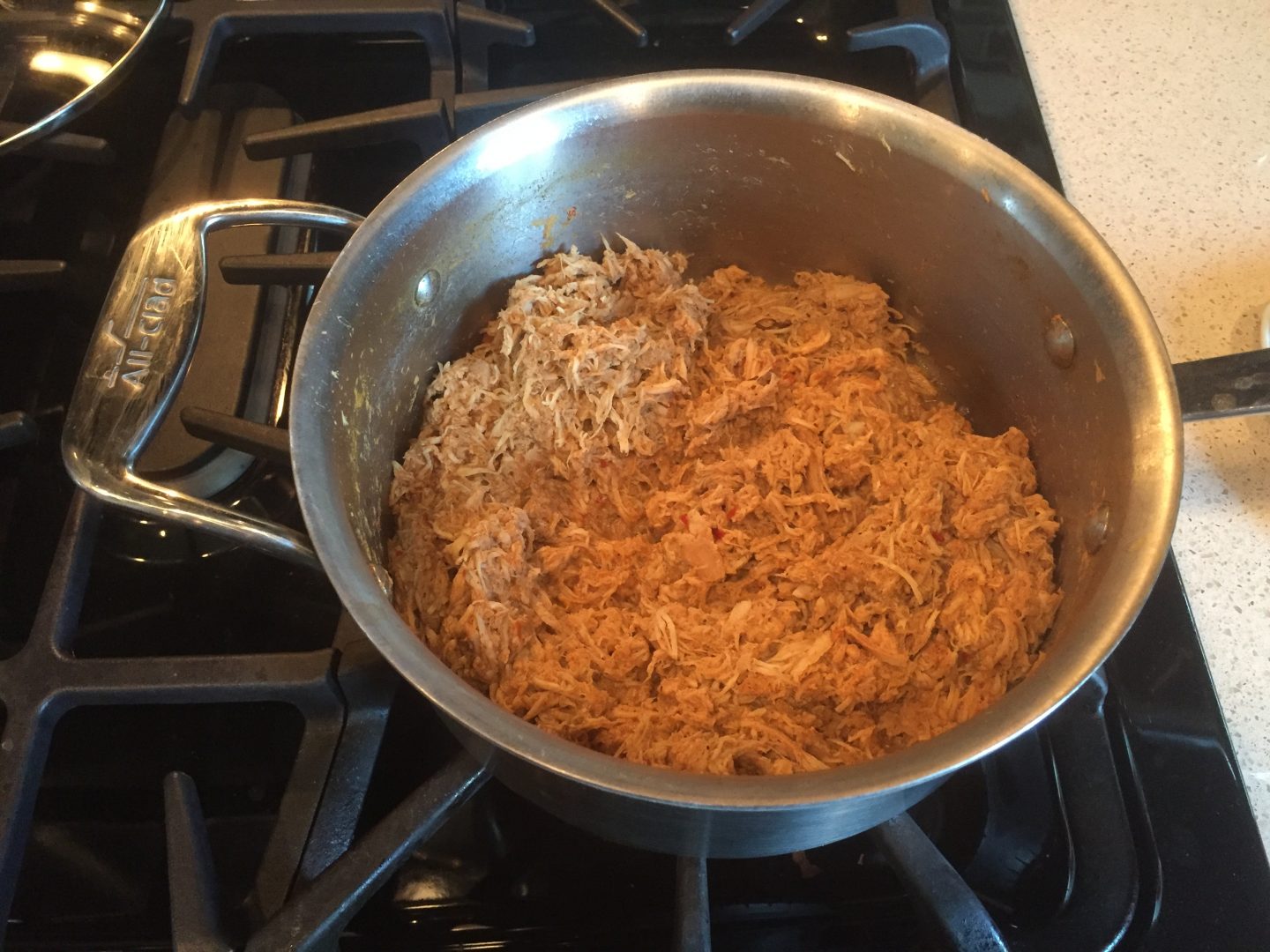 Put that meat in some tortillas and call it a day! 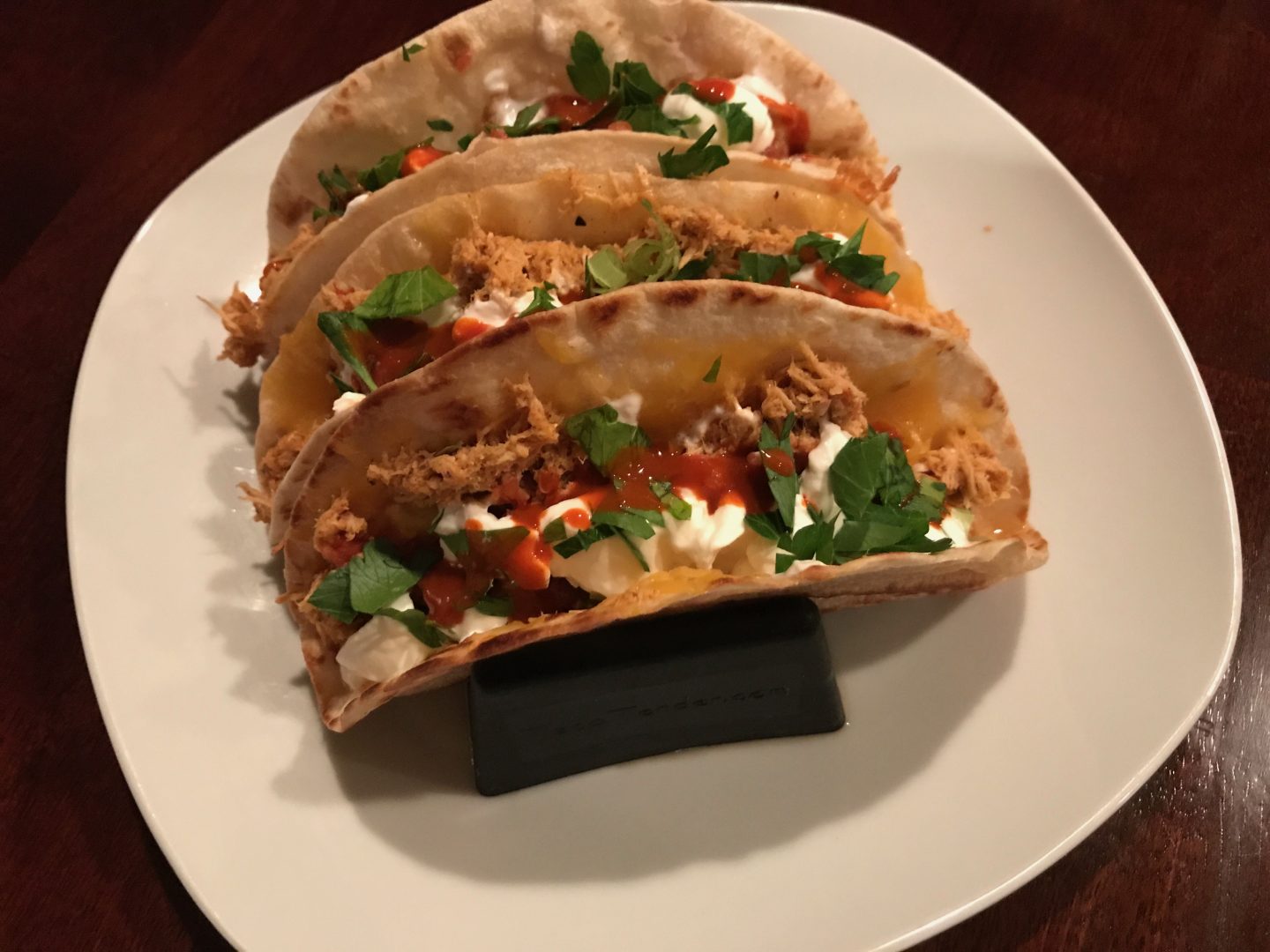 The last option is so simple – I can’t take any kind of “recipe” credit for it – it’s just another way to use the shredded chicken… BBQ chicken!  You can put this on sandwiches, salads, or even just eat by itself if you’re trying to go light on the carbs (which my hubs does on occasion).  He put it on some Hawaiian rolls as little sliders and took this cutie little pic for me at work the other day 🙂  He then wrote, “is this pic ok?  Can I dig in yet?” =)  #supportive 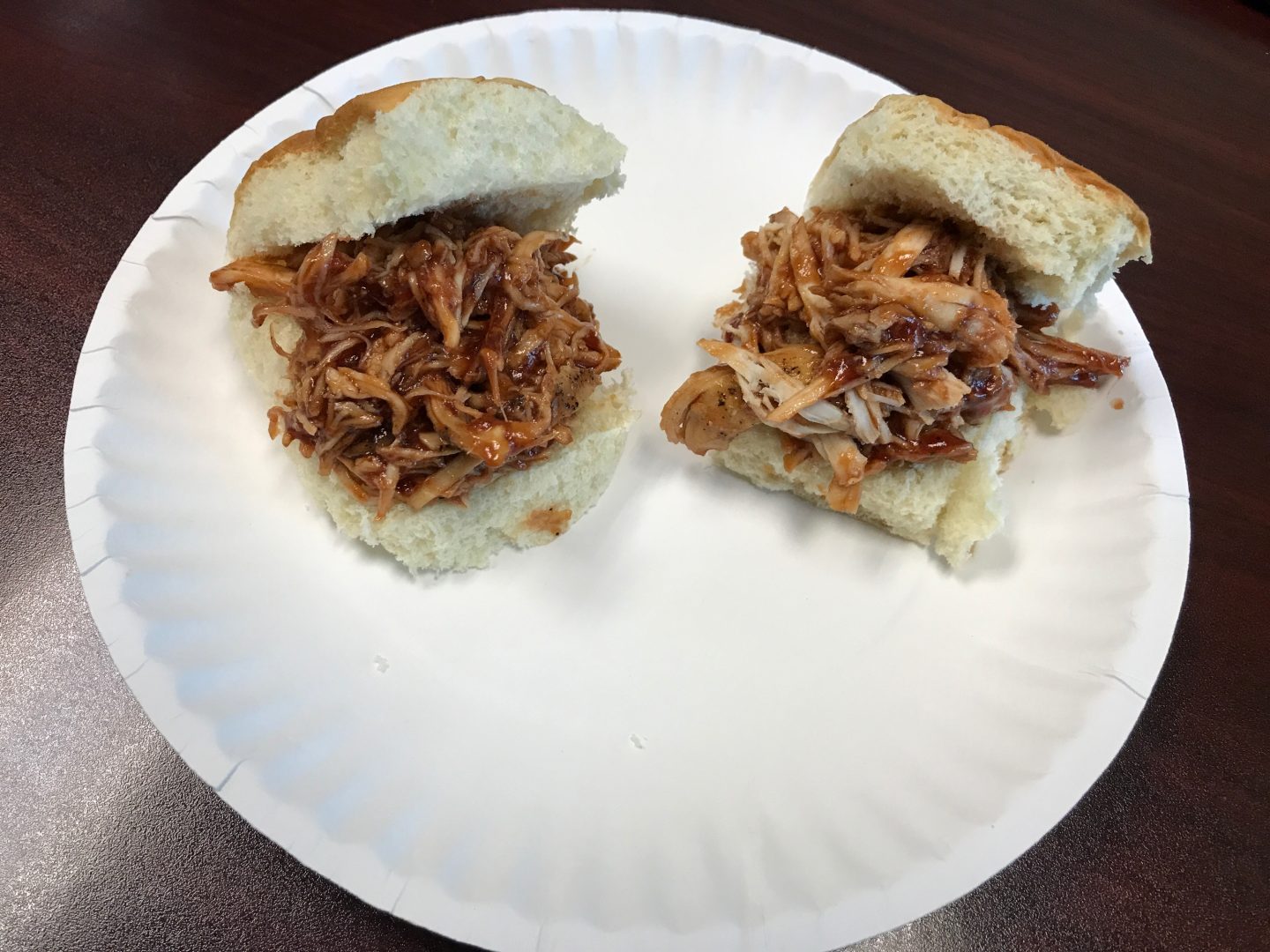 So there you have it!  Three simple ways to make different meals out of pretty much effortless shredded chicken!