Today I wanted to share a post on how you can meal meal prep for the week in the simplest way everrrr.  Let me preface this by saying that you’ve gotta like chicken if you want to follow this.  But the amazing thing is that four chicken breasts can make about 7-8 portions for the week and I’ll tell you how you can switch it up to make the meals different.

For this method/recipe, you’ll need 1-2 crockpots.  I used one big one and put 3 chicken breasts in it and one small one and put one large chicken breast in it.  I like to switch up the seasoning and flavors a bit, so I wanted to make the chicken two ways.

For the 3 chicken breasts in the large crockpot, I decided to make a Mexican flavored chicken.  So I added one cup of water with the following seasoning in it:

*If you don’t have these seasonings or don’t feel like measuring anything out, just add 1 package of taco seasoning with 1 cup of water… it’ll be really similar!

For the 1 chicken breast in the small crockpot, I just added a can of cream of chicken soup to it and some black pepper.

Set both on low for 6-8 hours.  Take the chicken out and shred with a fork and discard any fatty pieces.  Once you have shredded the cream of chicken version, just add it back into the crockpot so it soaks up the soup mixture.  This seems so simple but it is REALLY delicious.  It goes really well over egg noodles or rice or just to be eaten by itself! I had it over egg noodles (pictured below) and my daughter has been eating it with her meals every day and loves it.

For the Mexican chicken, I took the chicken out, shredded it and put it in a large pot and added the liquid from the crockpot.  I then cooked down the liquid so it was absorbed into the meat.  This is really important because you don’t want your chicken to be soggy.  Nobody likes soggy food.  Ick!  If you’re running short on time**, crank that heat up to high on that bad boy and just stir until the liquid is absorbed (probably around 15 minutes or so).  If you’re trying to stretch out when you’re eating dinner, you can add water to the chicken and cook on medium until the liquid is all absorbed.  That was the case for me because I started the chicken so early in the morning.  So I added 2 cups of water to the chicken in the put and cooked it for about 30-40 minutes on medium until the liquid was all absorbed. (Photos below).

**If you don’t want to use another pot to cook down the juices, just be sure to use tongs to get the chicken out – you could even put on a plate with a dish towel to soak up some juices.  Where I think people go wrong sometimes (and then don’t want to try crockpot chicken again) is not getting these juices out and then having soggy food.  Make sure you do something to get those juices out and you’ll like the chicken wayyy better.

So there you have it!  If you take the time to start the crockpot in the morning, you can have so many meals already prepped for the week!  See pics below 🙂 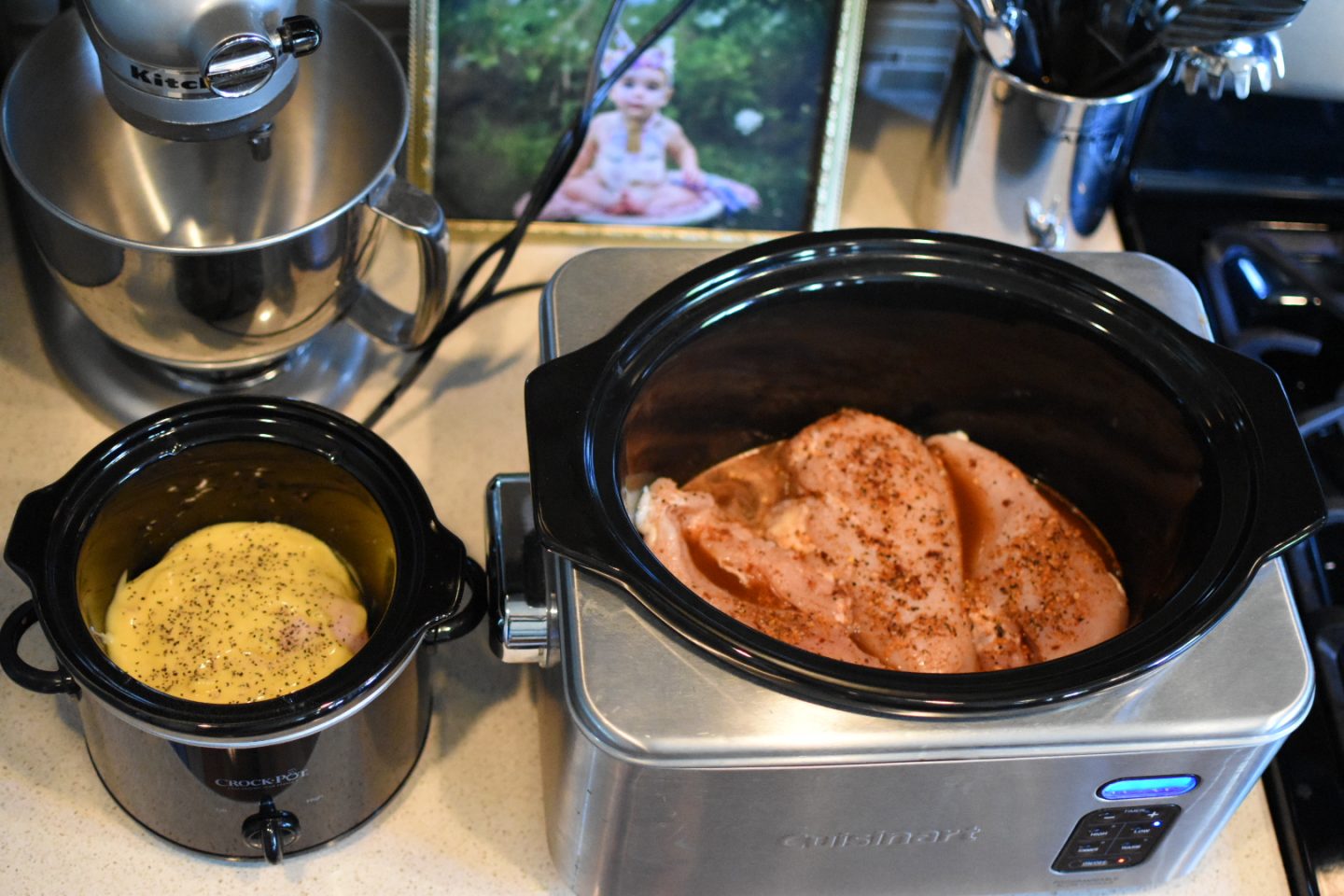 ^Setting the crockpots up in the morning 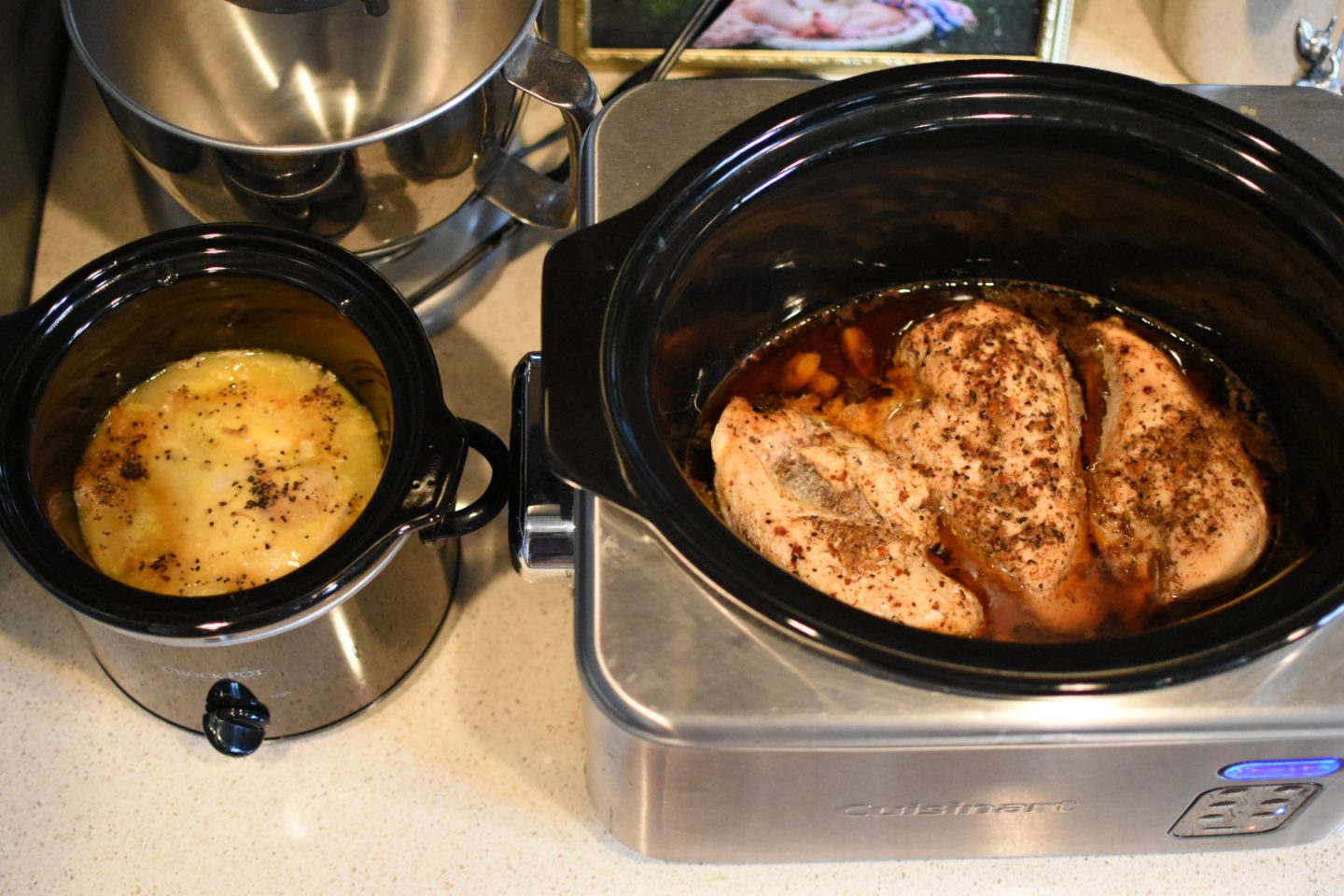 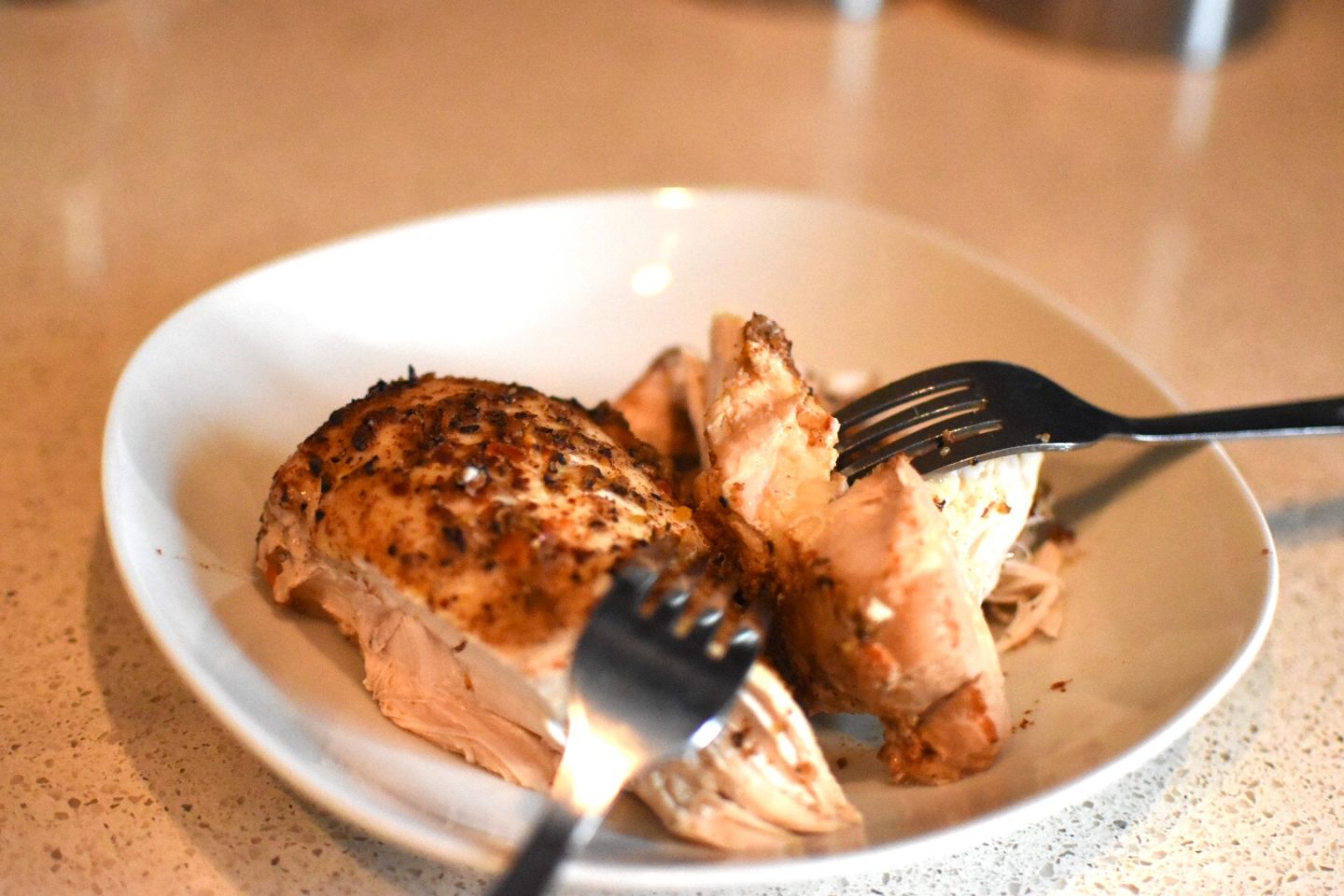 ^Shred the chicken with two forks and discard the fat 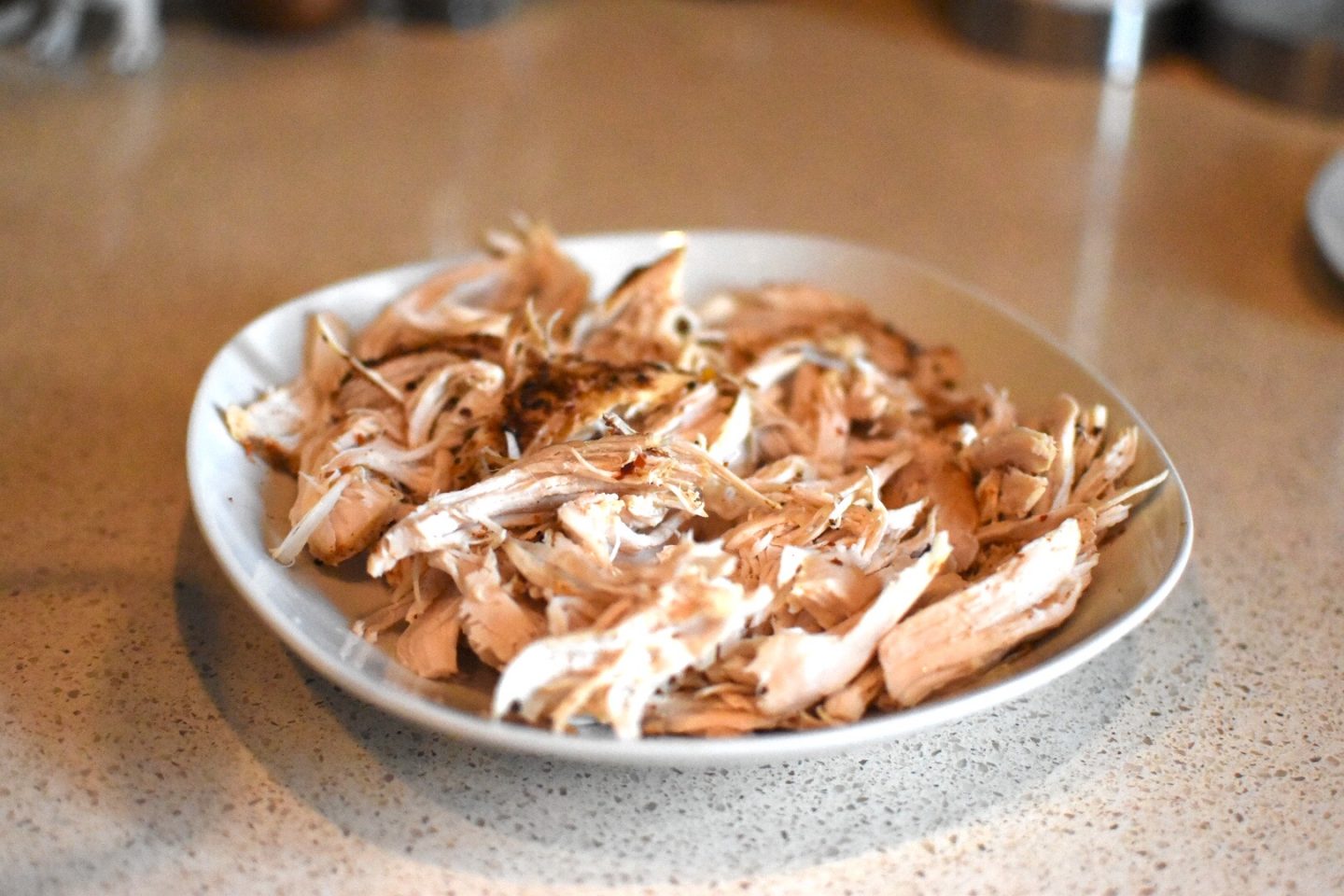 ^That is just ONE chicken breast shredded 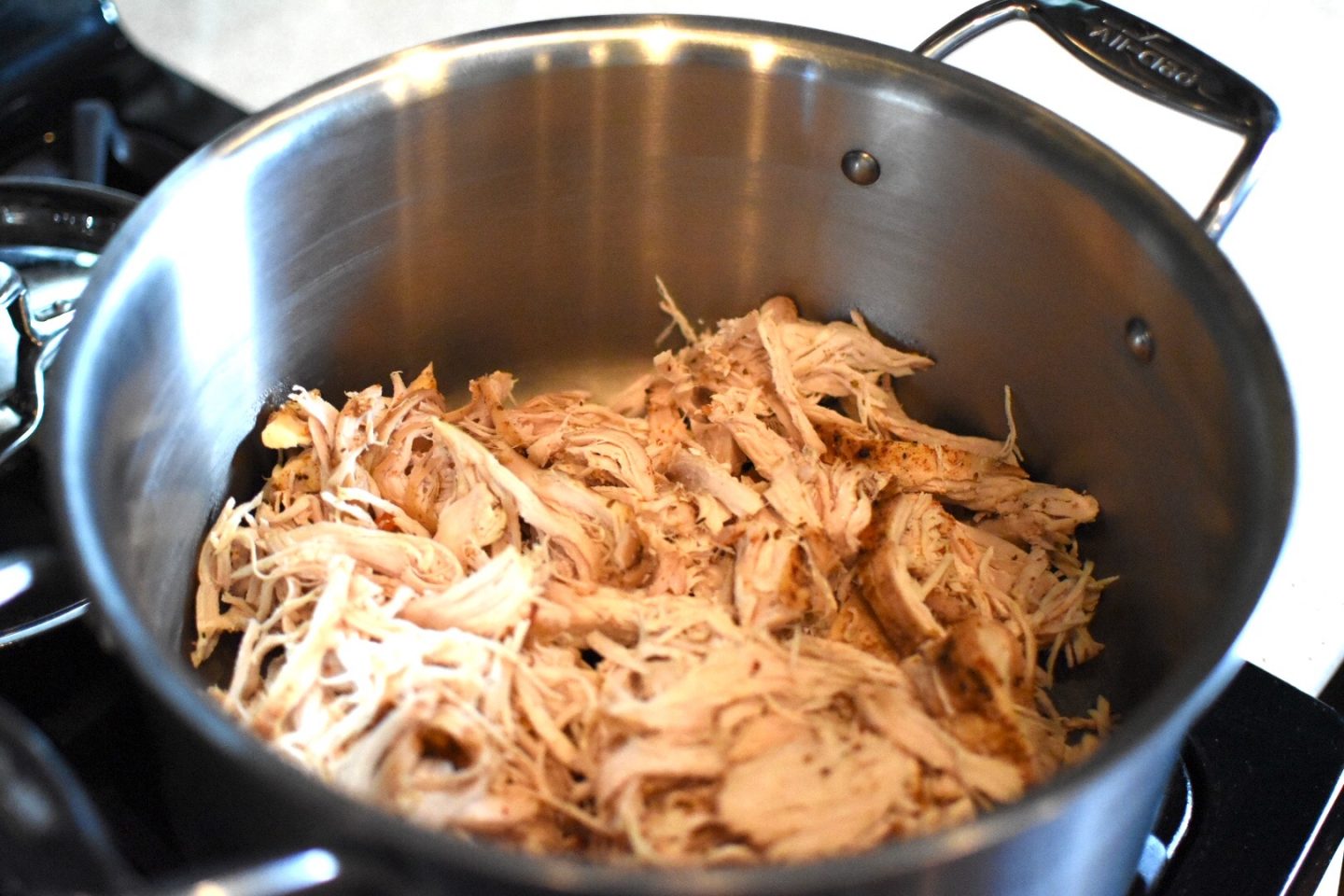 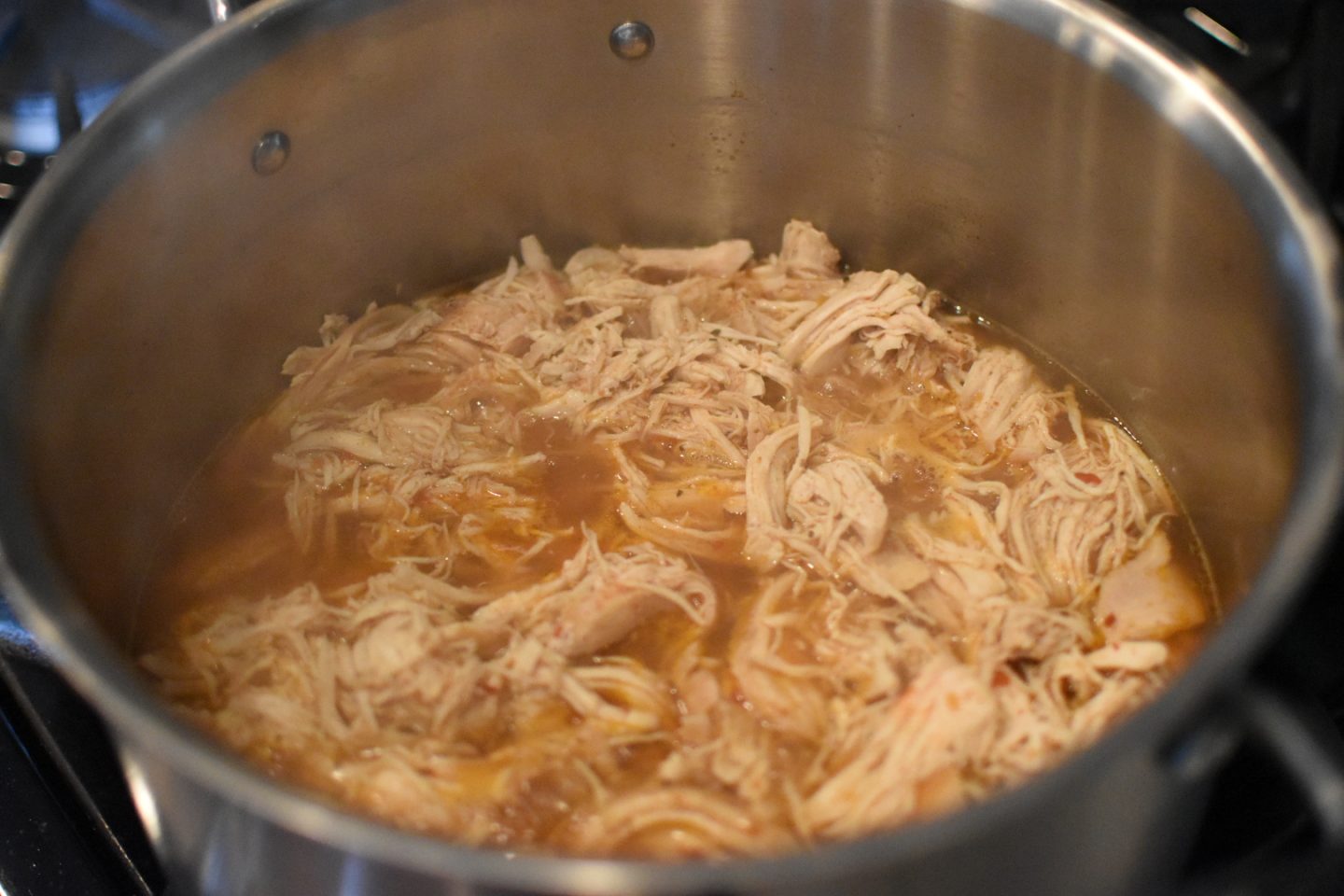 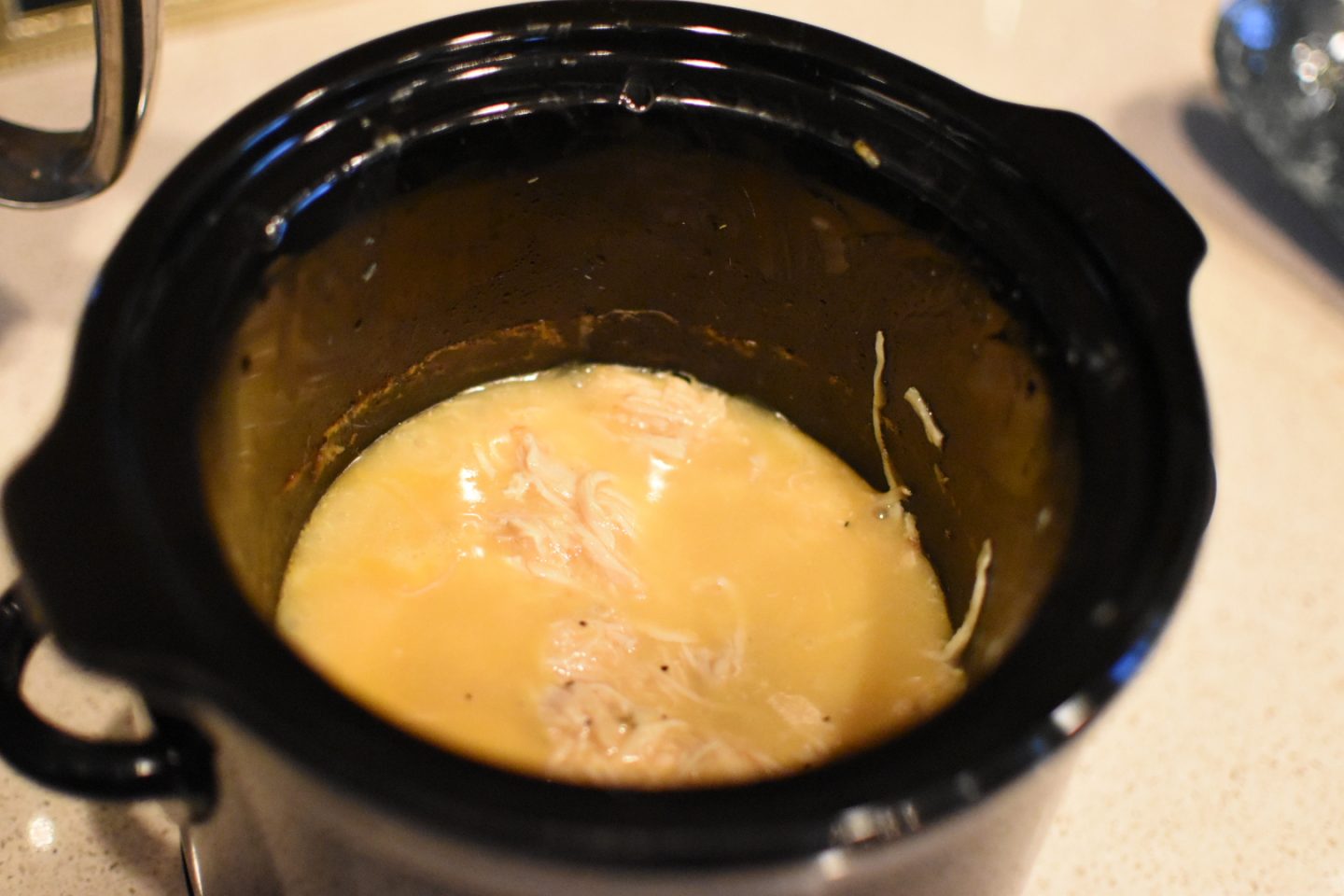 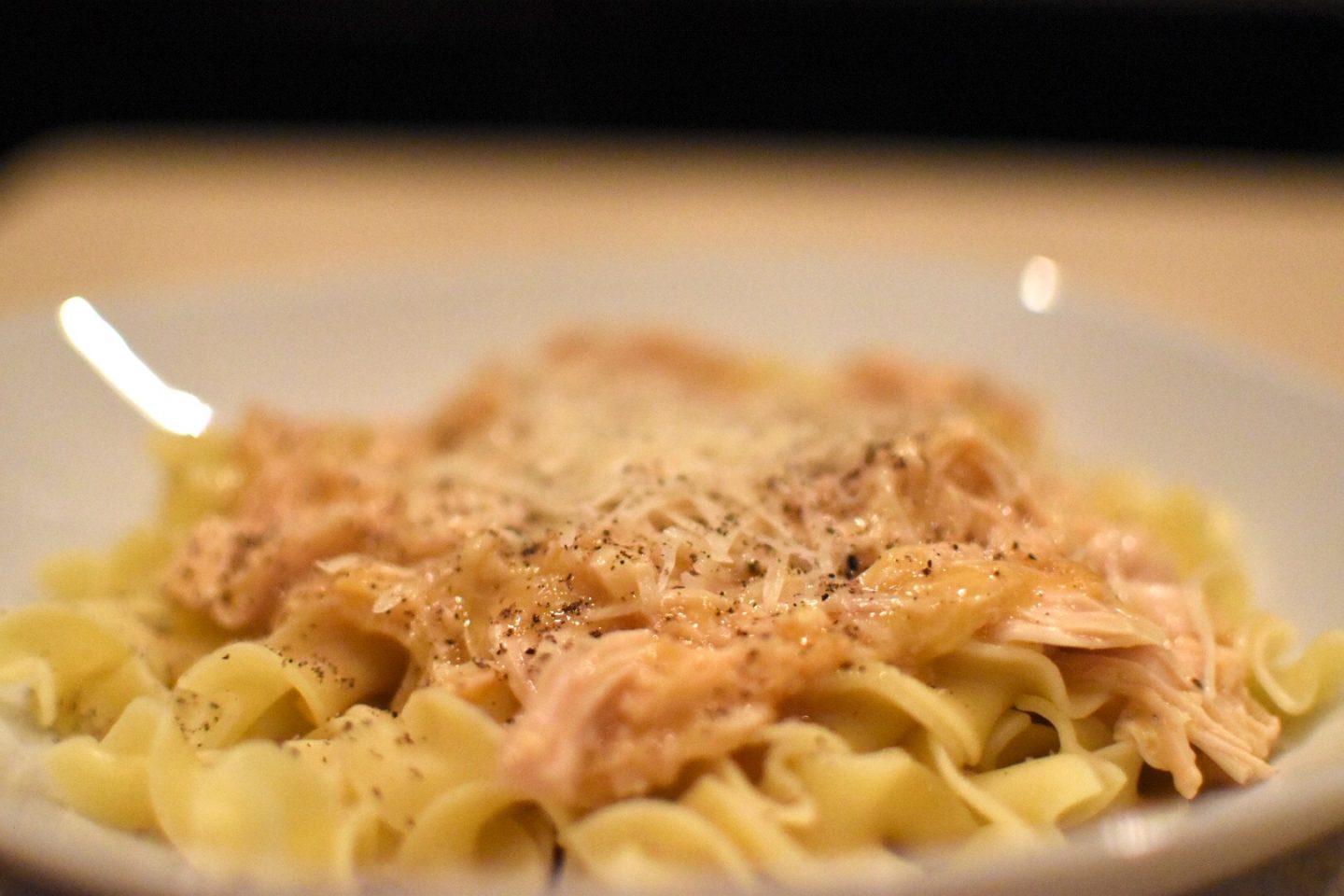 ^Eat on top of egg noodles or rice.  I added a little parmesan cheese and more pepper to mine. 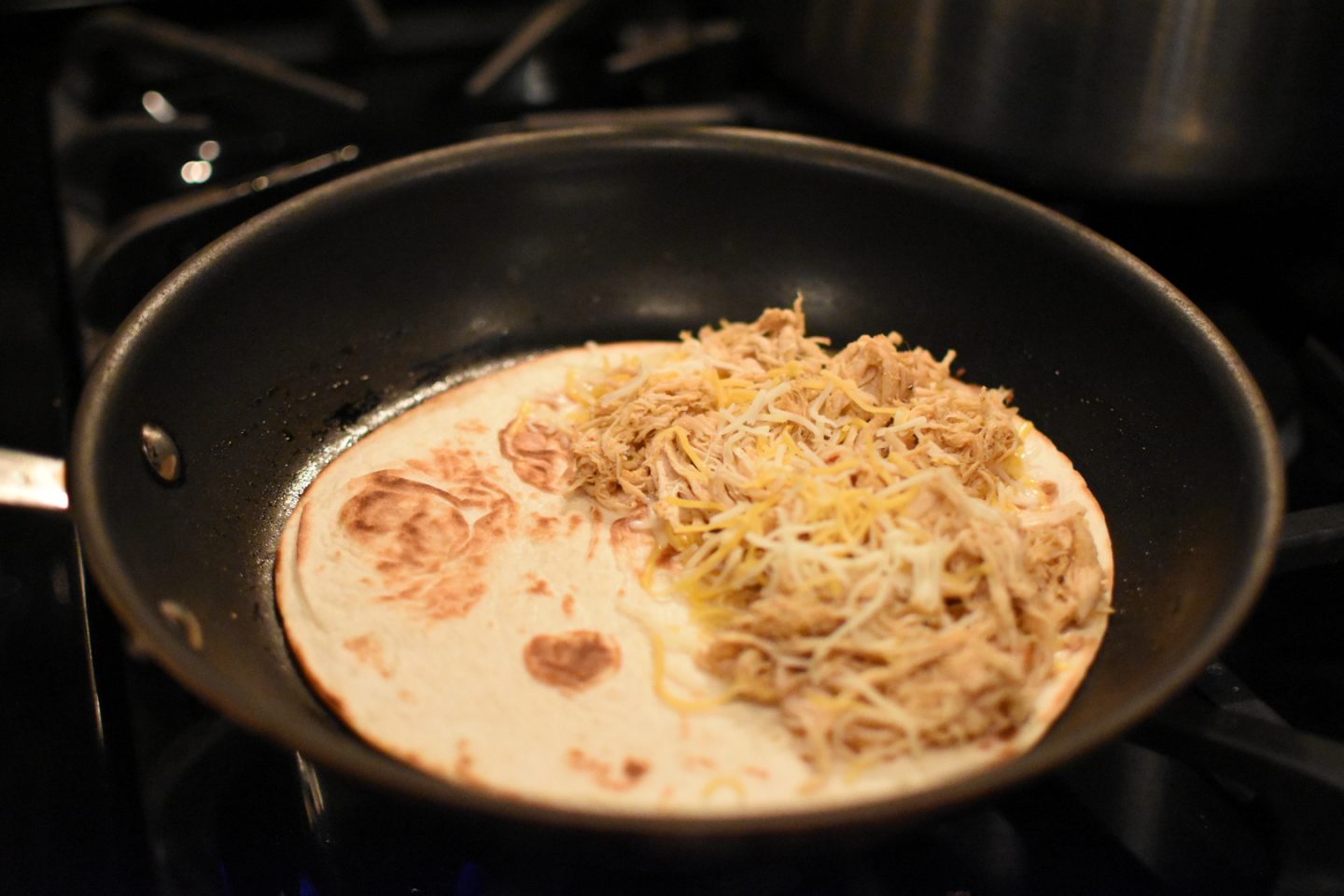 ^Brown up a tortilla in a pan, add cheese to one side then top with the Mexican chicken, add a little more cheese to the top and fold the other half of the tortilla over 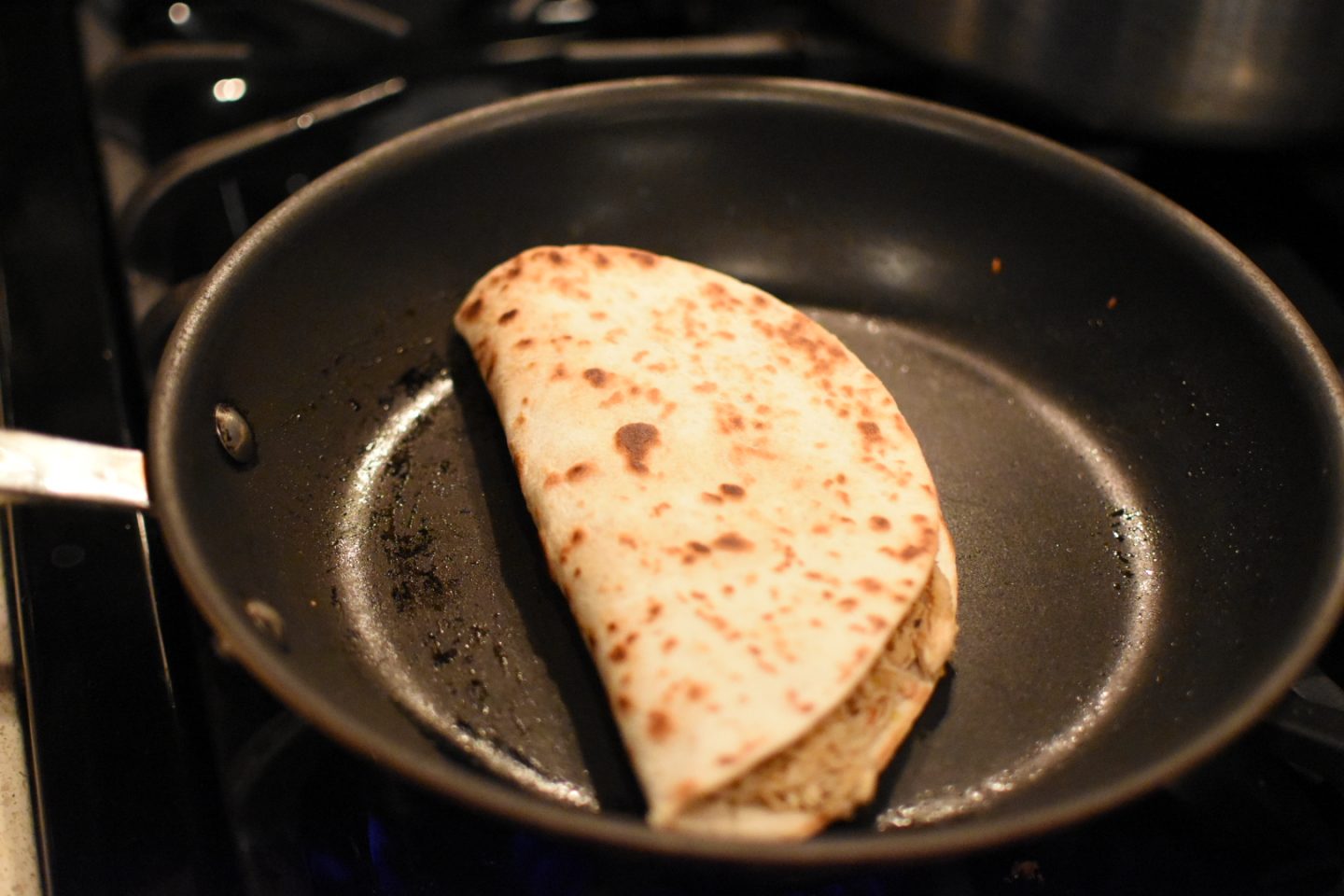 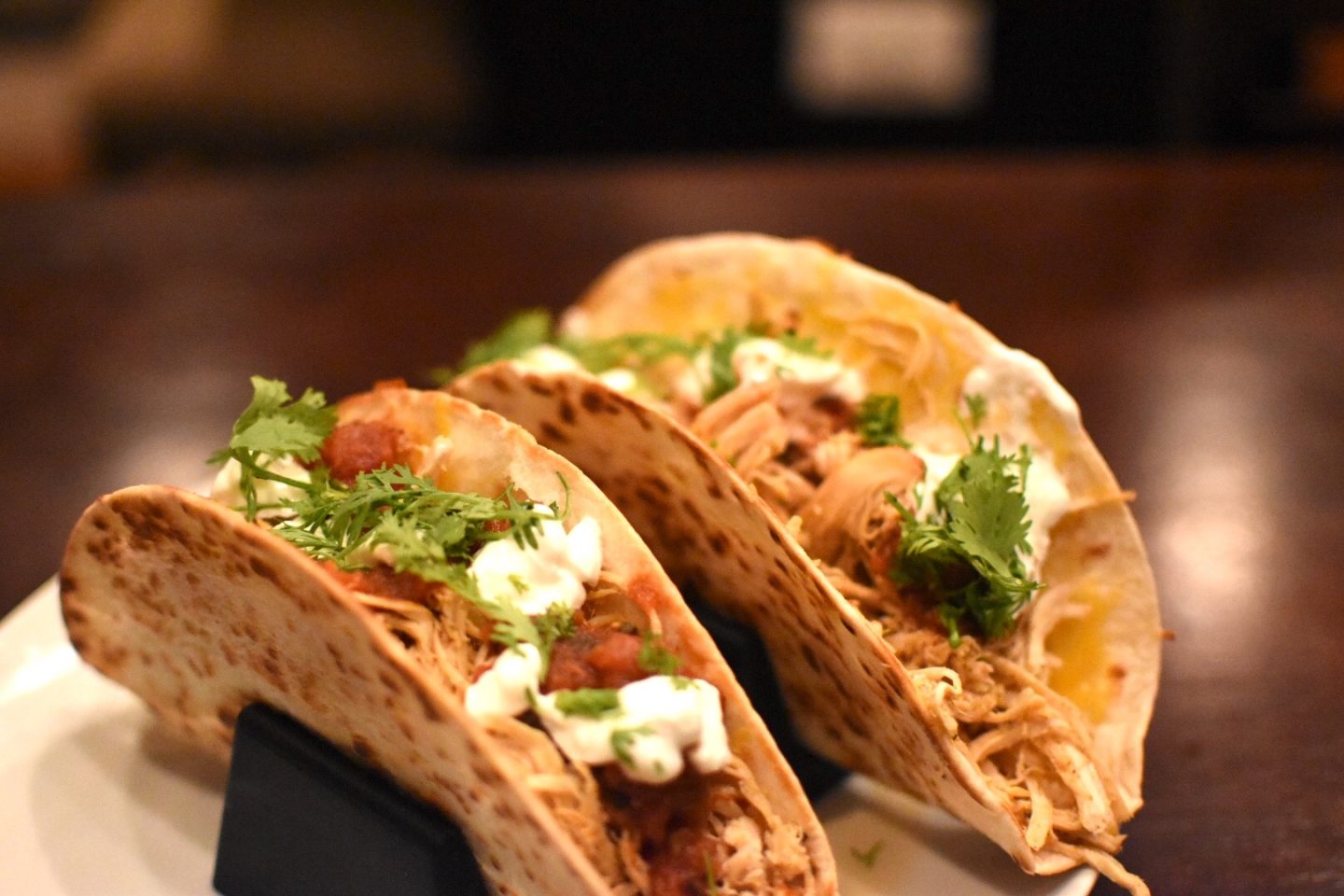 ^Top with salsa, sour cream, cilantro or whatever you prefer 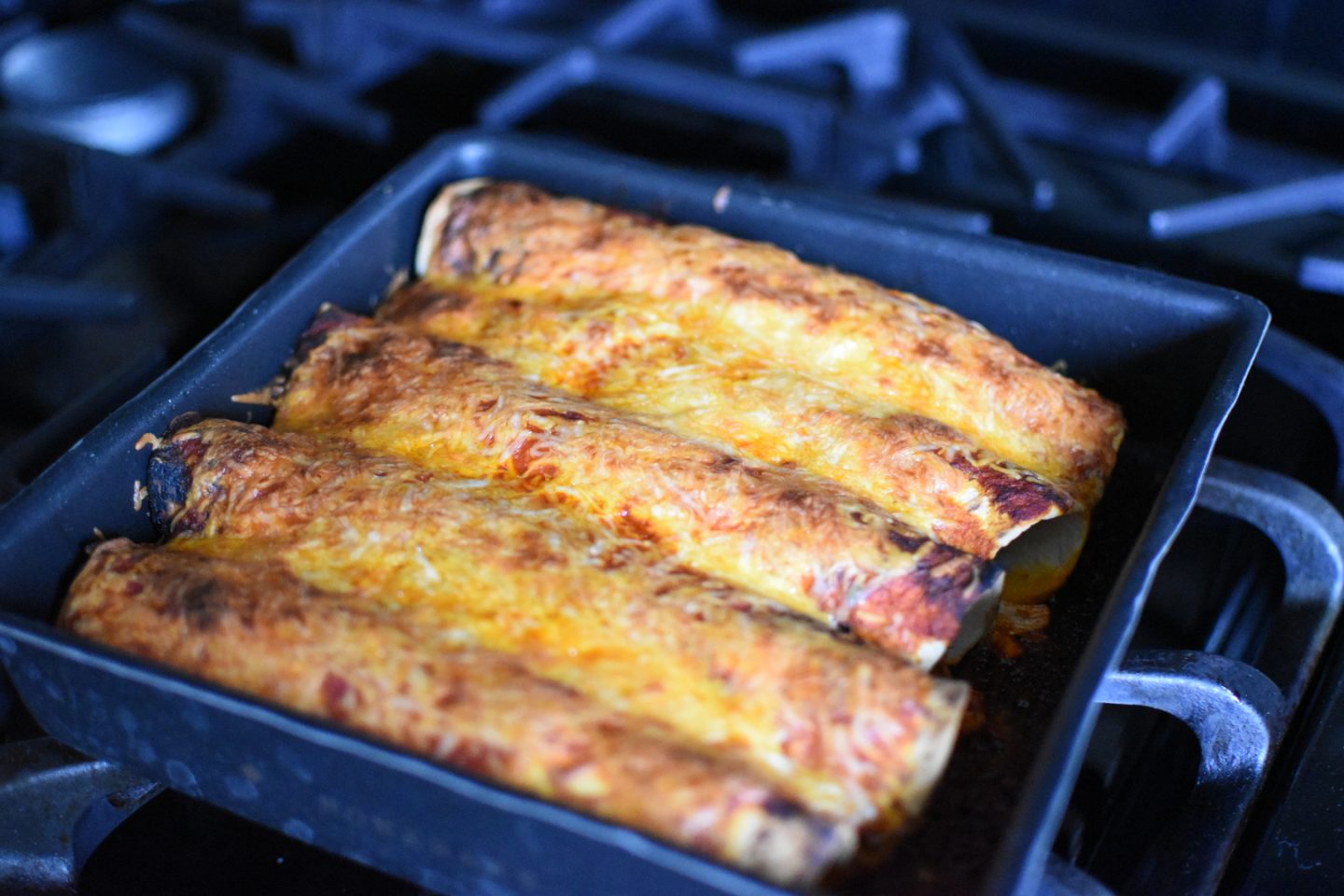 ^Made 5 HUGE enchiladas with the rest  (Not pictured are two plates of nachos :))