Today I wanted to share some pics from Isla’s 3rd birthday party (which also doubled as our baby gender reveal).

This was the first year that Isla has really voiced a party theme and she just LOVES Baby Shark.  I happen to find it unbelievably annoying 😉 but it’s all about her, so we went for it!

Since we ended up throwing in our gender reveal, it kind of tied in with the whole “baby” theme, too, so that worked!

**Skip down to get to the photos**

I have to admit, I went to take pics and found that my Nikon battery was dead as a doornail, so I spent the majority of the party with it on the charger.   I snapped a few with my phone, but I decided to take it as a sign that I should really just put my phone/camera down and be present in the moment.  I had a lot of entertaining to do and I wanted to make sure and spend time with Isla – because in years past, I feel like I hardly got to spend her party with her.

Now, that’s not to say that because of that, I don’t have this (probably silly) guilt lurking: I didn’t get any pics of Isla with her family or friends and that hurts my heart. I know it’s more important to have the memories and the moments in our hearts and heads… but I wish I’d have done a better job of getting some pics of her throughout the party.

The most important thing, though, is that she had an amazing time and can’t stop talking about it.  “Maybe we can have another birthday party next week!” is her favorite thing to say right now.  She’s very loved and very blessed and we are so fortunate that so many people came to celebrate HER.

We were also lucky enough to be able to announce what our NEW baby is — SPOILER alert – she’s a girl!

We are SO thrilled that we are going to have two daughters and Isla’s going to have a little sister.  We think she will make the best big sister and can’t wait until this new bundle of joy is here!

Isla was already sure it was a girl, so it came as no surprise to her, but the majority of people had guessed boy, so I think it was a bit of a surprise :).

Between Eric and I, he thought it was a boy right off the bat, then switched to saying it was for SURE a girl after our first ultrasound.  I was more torn… I have felt so different this pregnancy than I did with Isla — so much worse and so much more nauseas, that I thought maybe it was a boy (since the pregnancies seem so different).  But my instinct was that it was a girl – when she first kicked and when I first saw a belly pop out and in other little moments.  So I was pretty torn.  It was a really fun experience to go get the ultrasound where the told us she was a girl and for Eric and I to share that between just the two of us for a couple of weeks.

Oh, and let’s talk other food for a minute here, because we all know how important food is to me ;).  **(see below for cake and cupcake info!!)

I decided to do a taco bar for this party, so I made a couple of crockpots worth of meat and ordered in Isla and my favorite cheese dip from our favorite place (Friacos) and get the rice and beans and chips and salsa from there too.  Everything else, we made.  I used Frontera seasoning for the ground beef and people went nuts over it – I can’t take credit for it, but if you’re looking for a different type of taco seasoning than just the dry packet of seasoning, I highly recommend!  We got guacamole from Sam’s Club and I just jazzed it up a little bit.

The food was a huge hit and people went back for plate after plate of it.  I did both flour and corn tortillas (so there was a GF option) and made cheese quesadillas ahead of time for vegetarians/kiddos.  If you’re looking for an idea of how to feed a lot of people and still have options for people with dietary restrictions, I think it’s a great way to accommodate everyone.

For the favors, we did bags of “baby” gold fish and “baby” sweetish fish to go with the baby shark theme.

Anyway, it was a lovely day celebrating her and this new baby to come and we are just thrilled!  Take a look at our fun day below!

*Isla’s dress is from Etsy and she got so many compliments on it – it looks really expensive but was only $20 – there are tons of different options, from princesses to Mickey & Minnie, so if you’re looking for a cute dress for your toddler’s occasion, you should check it out!  I also linked her 9 pack of bows I got for only $12!  Links to those and similar dresses to mine are right below :). 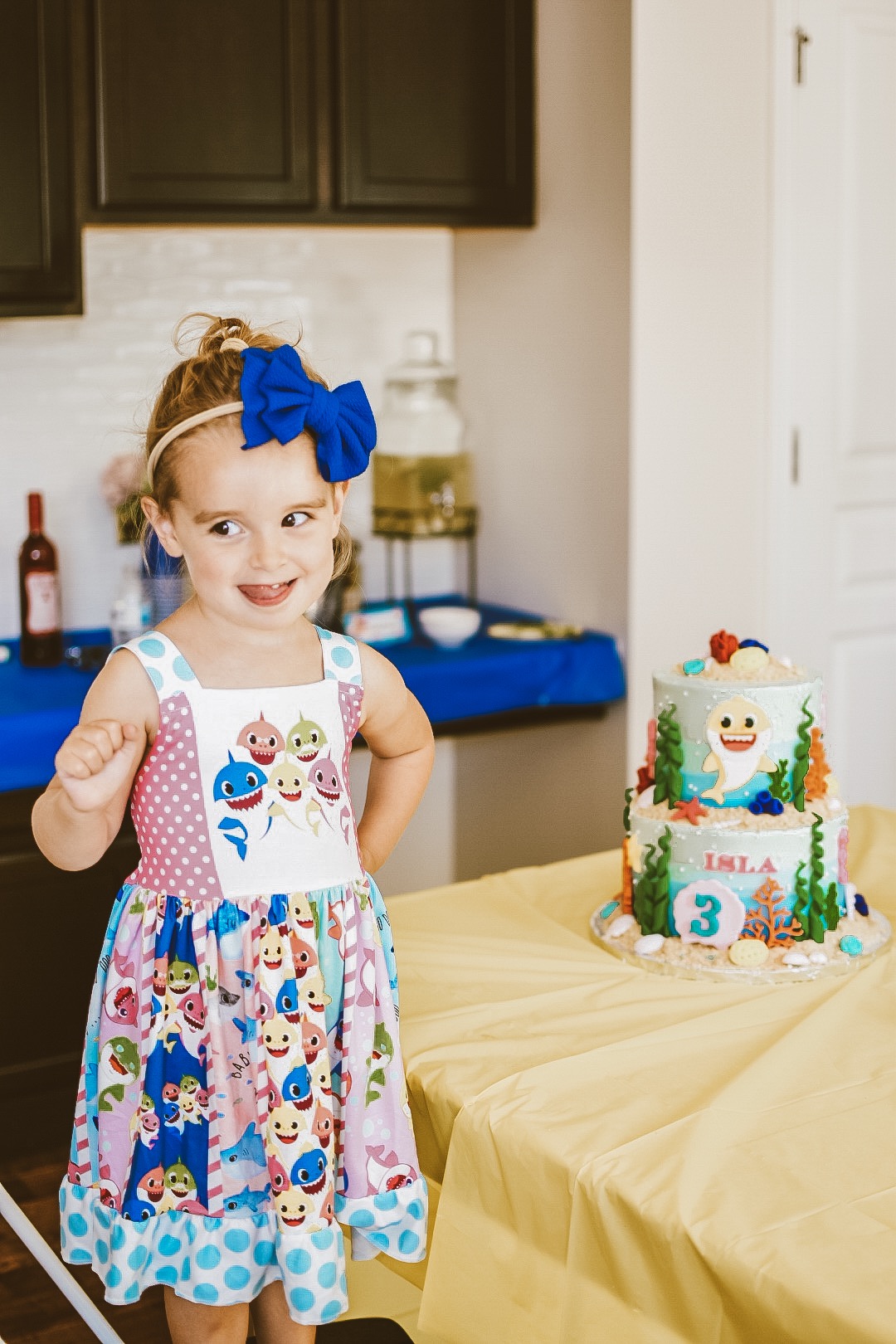 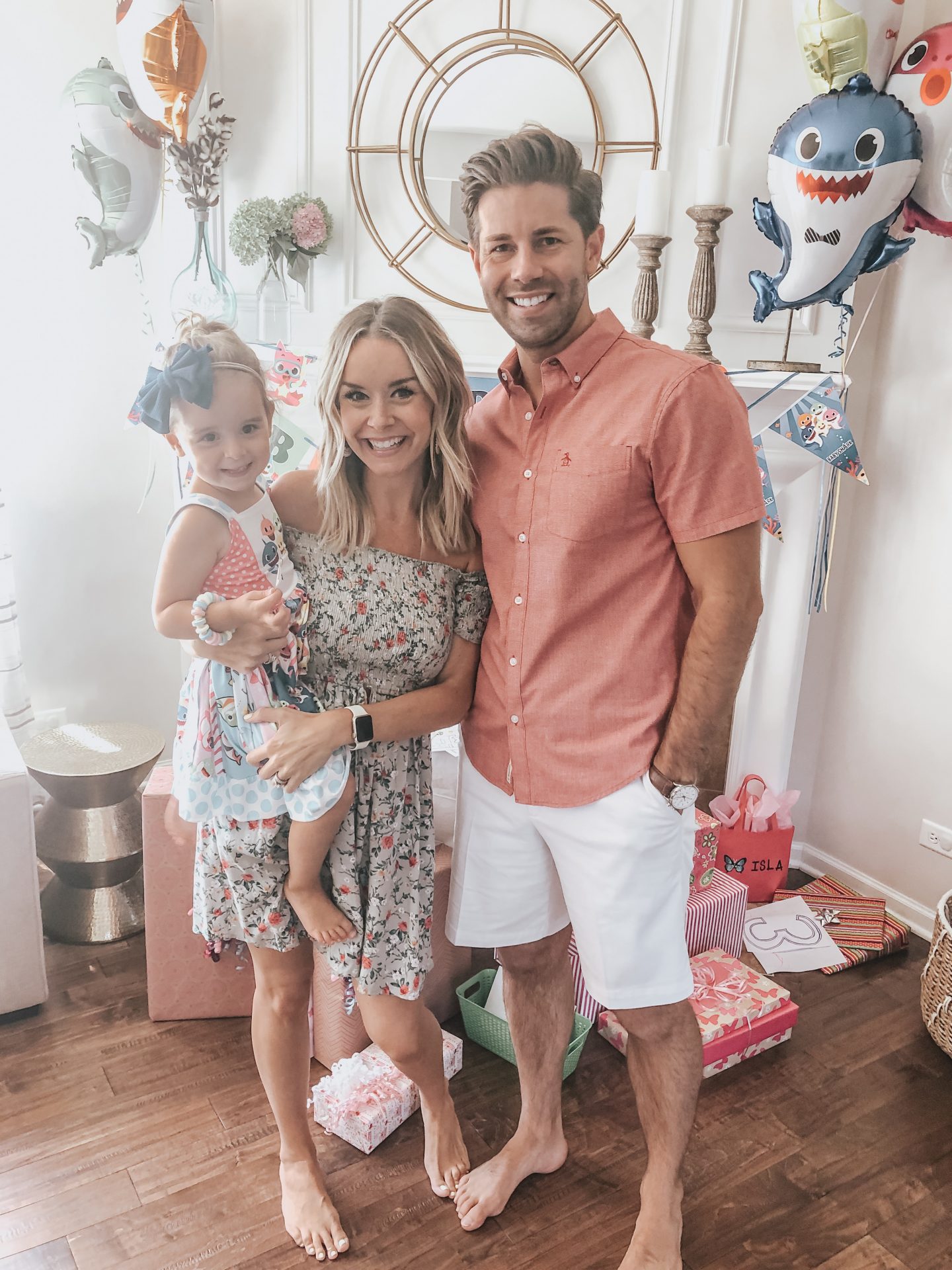 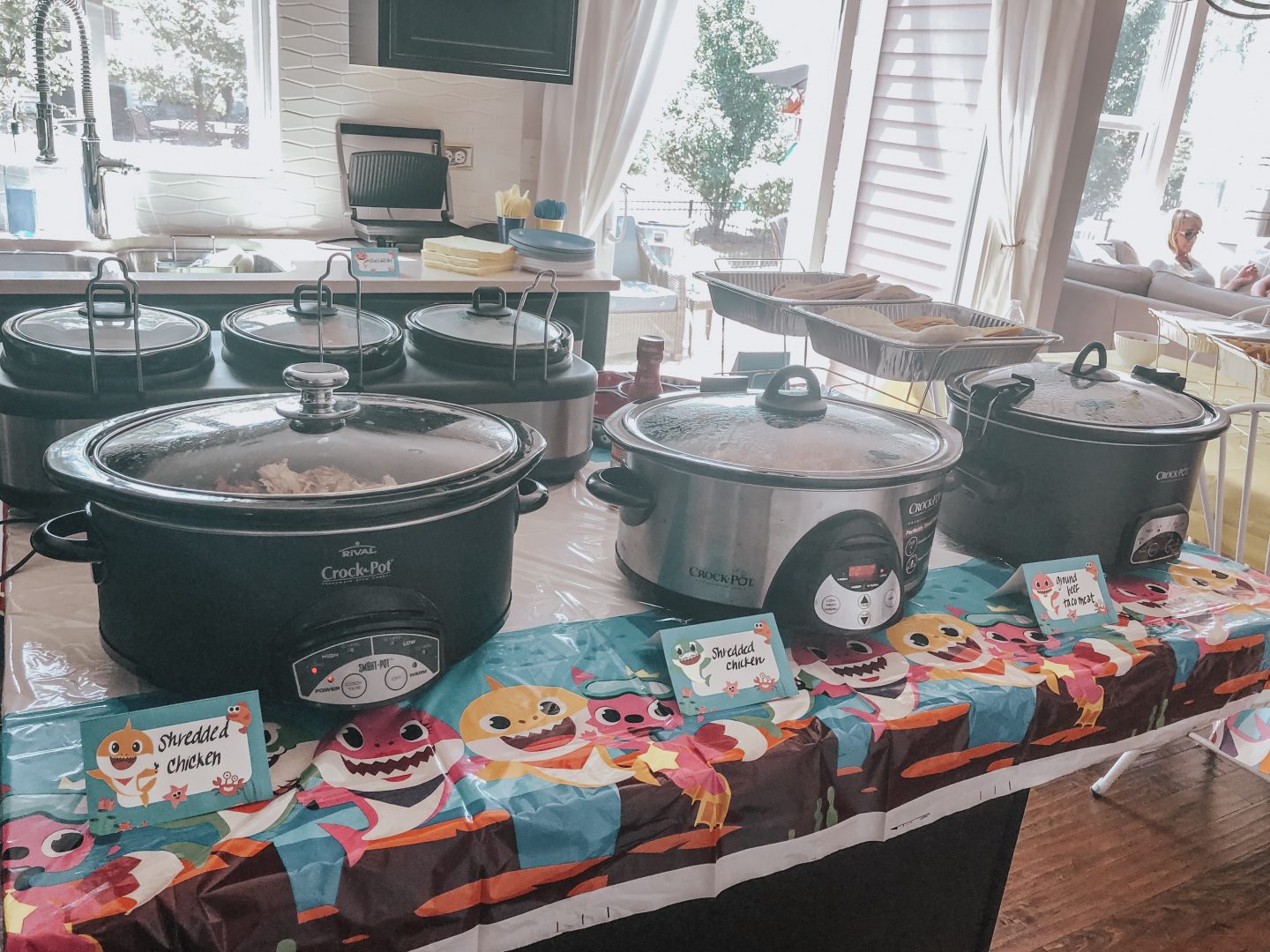 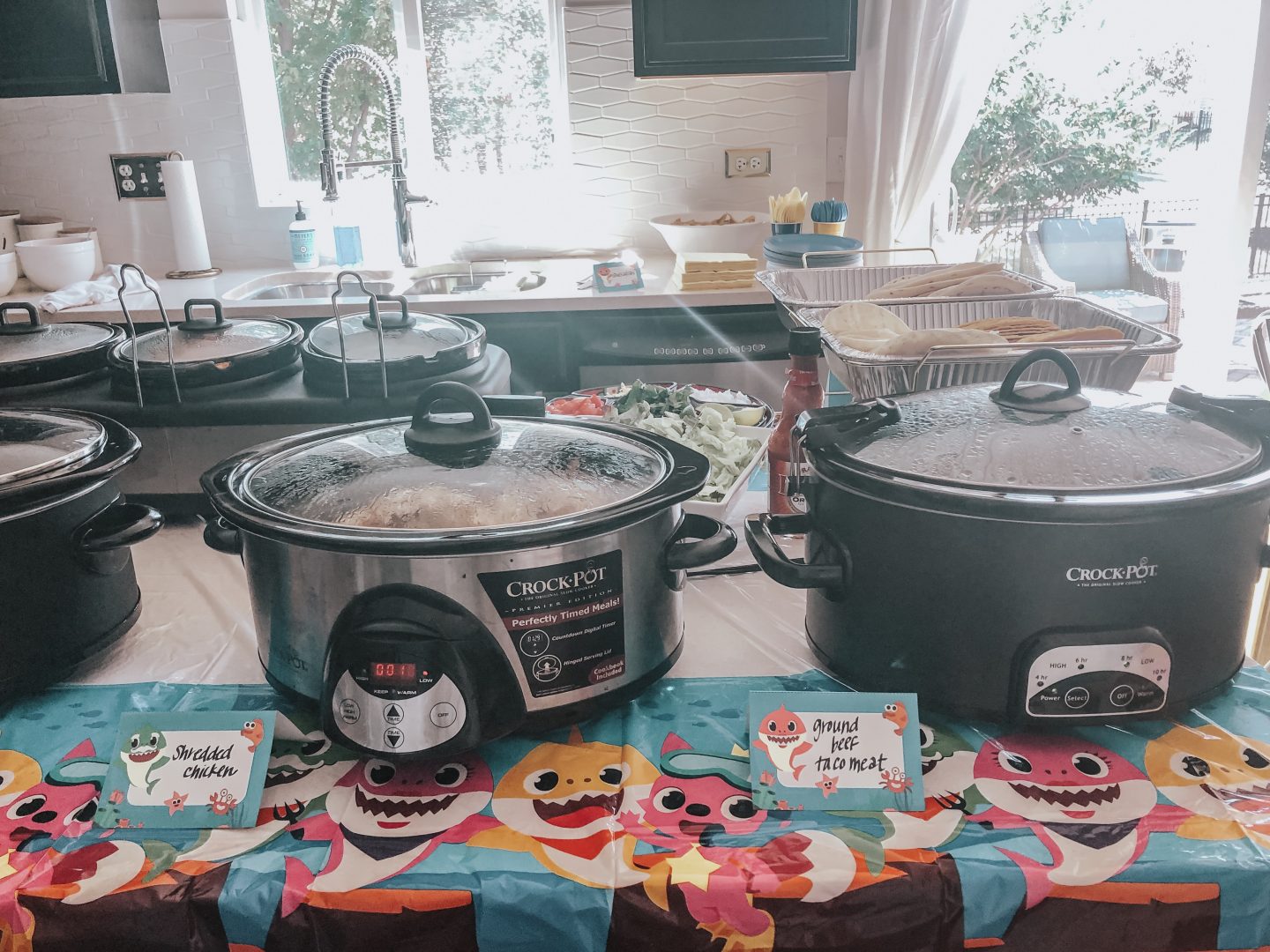 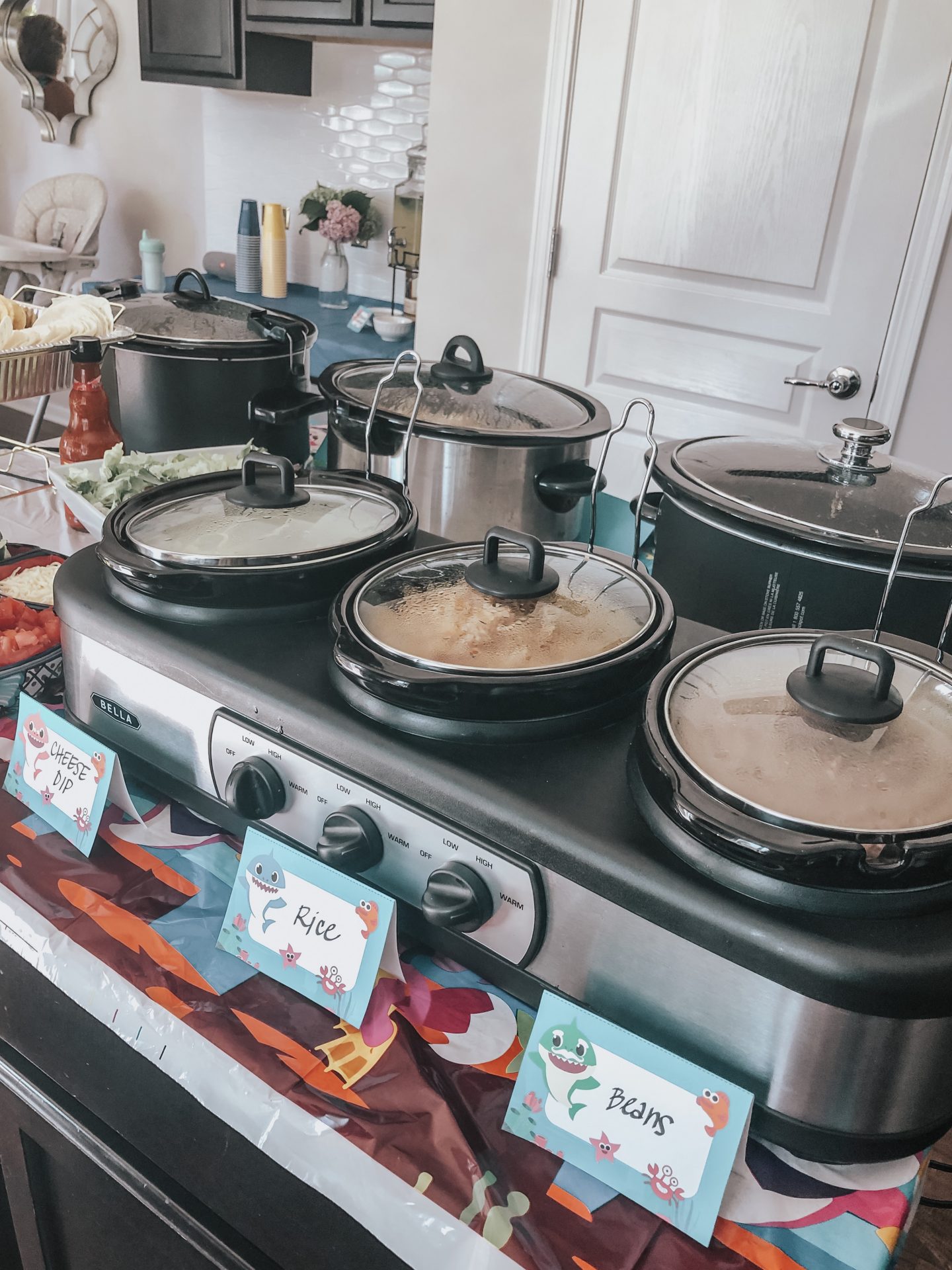 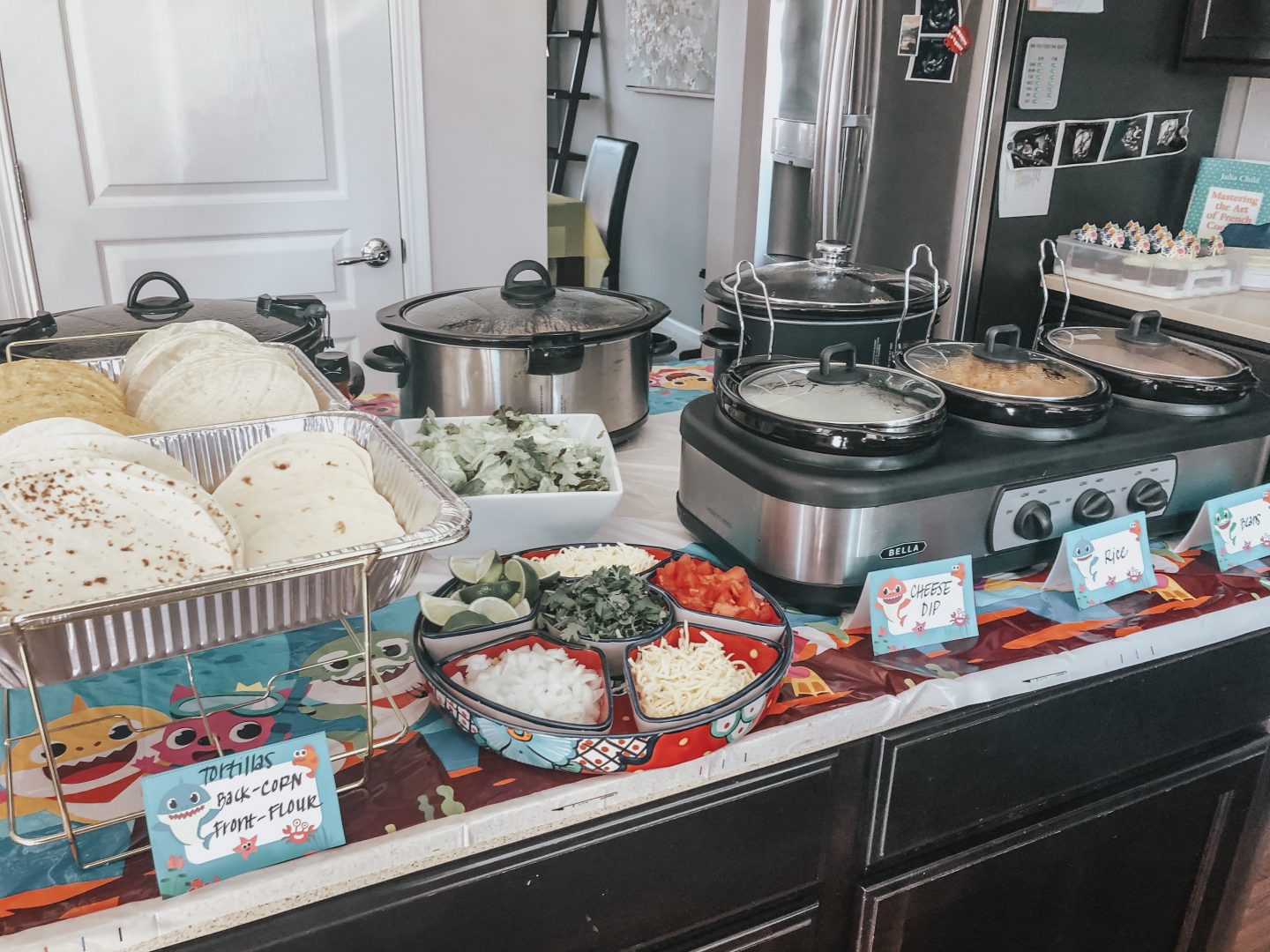 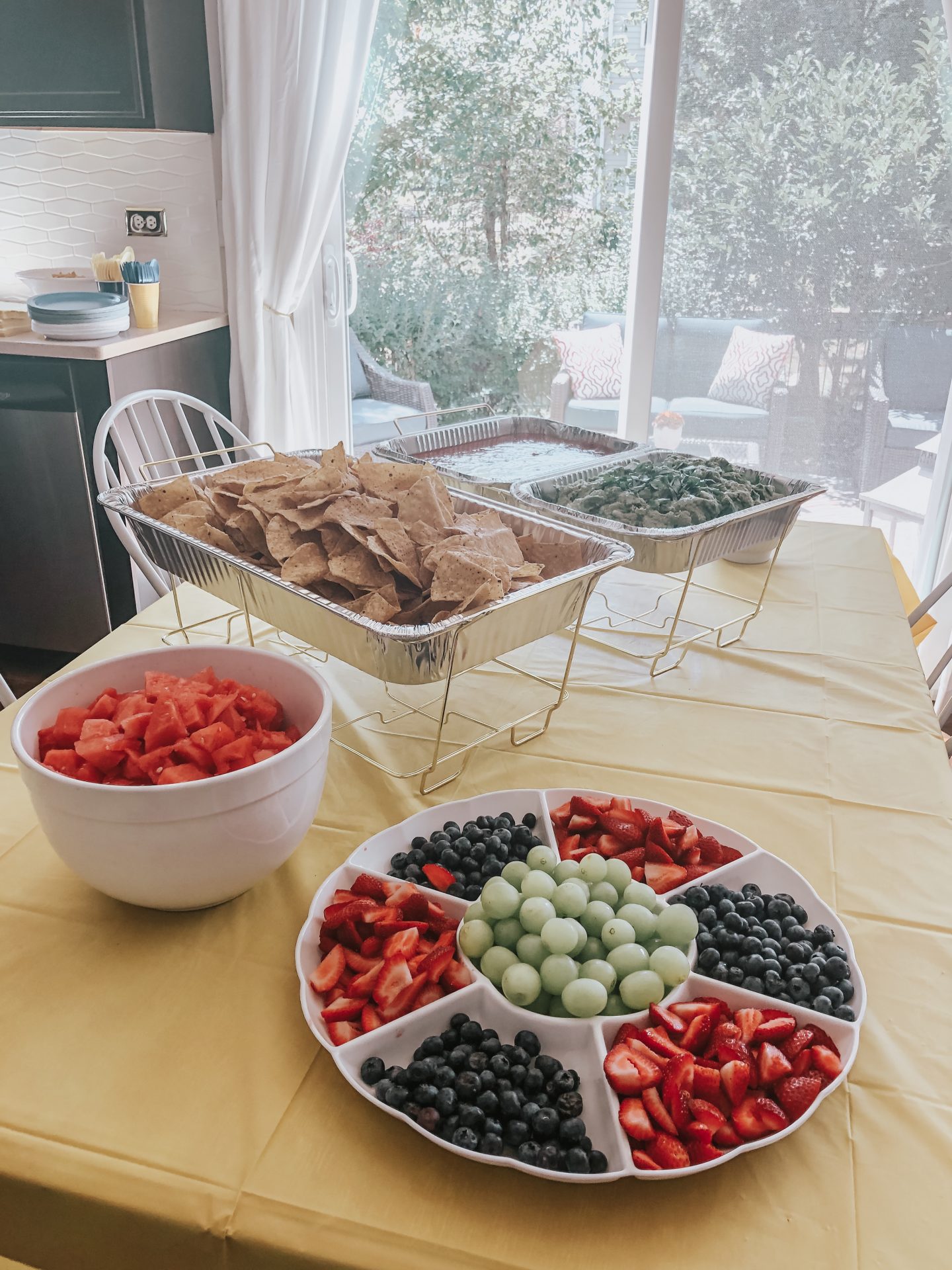 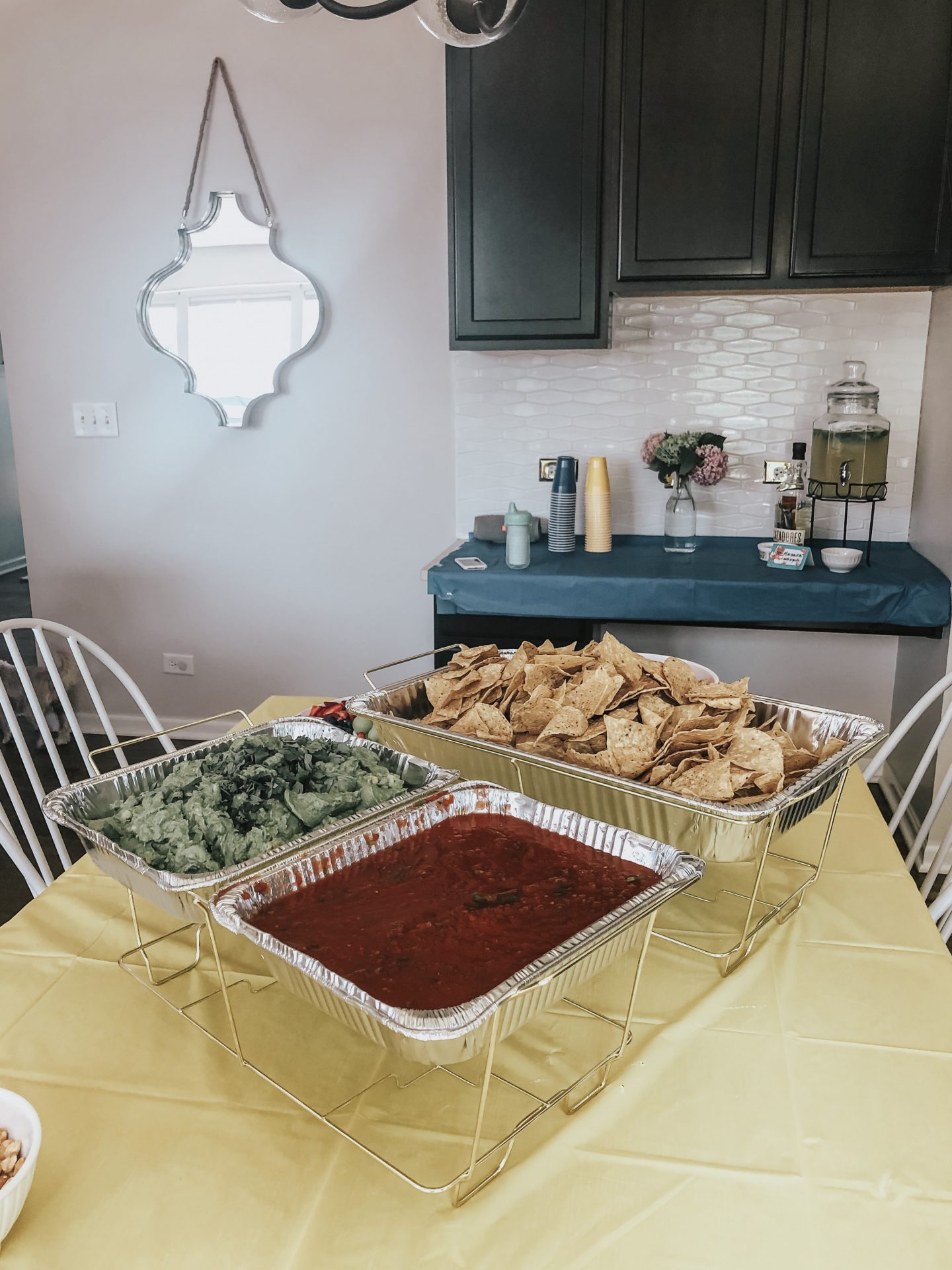 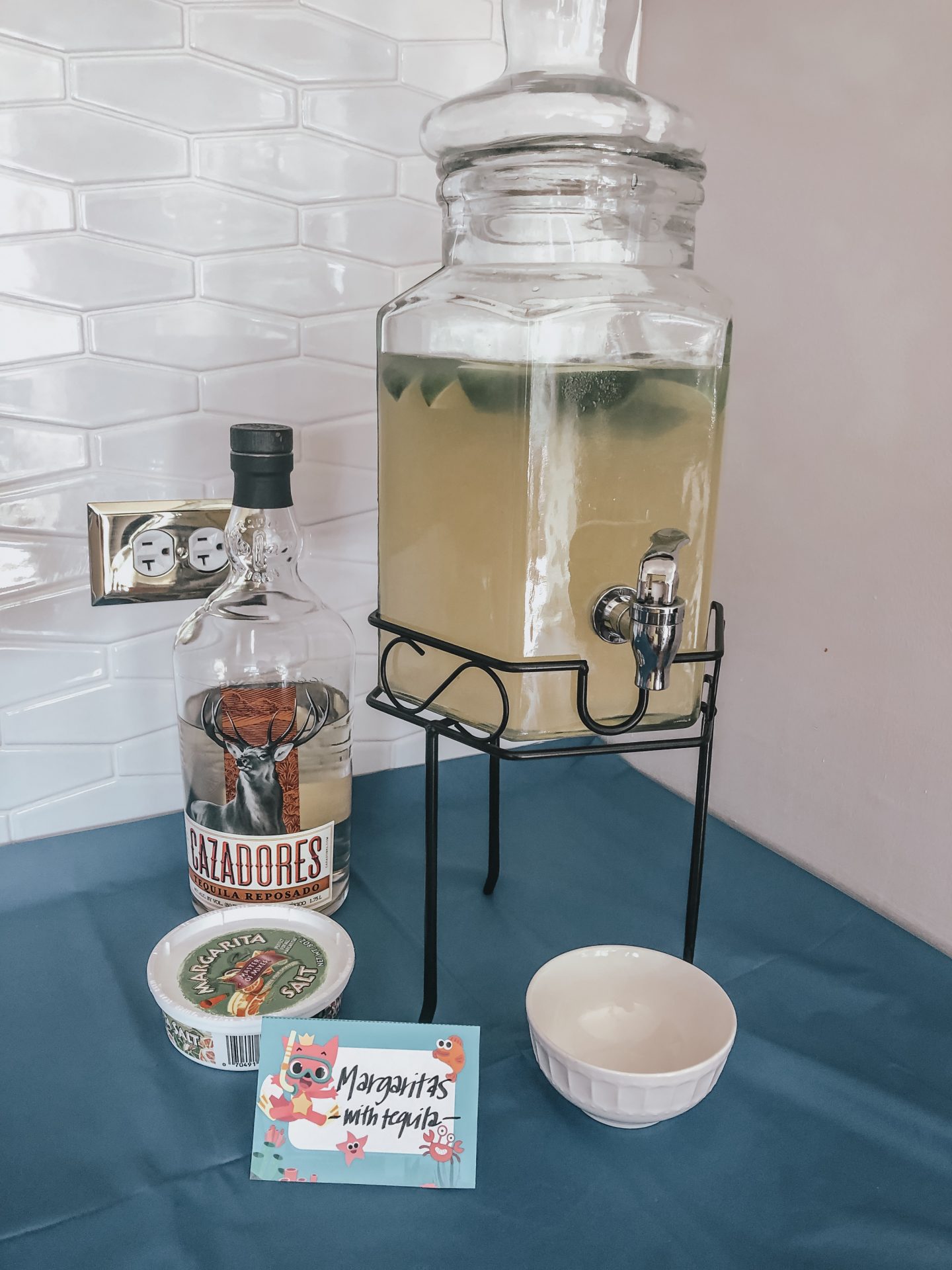 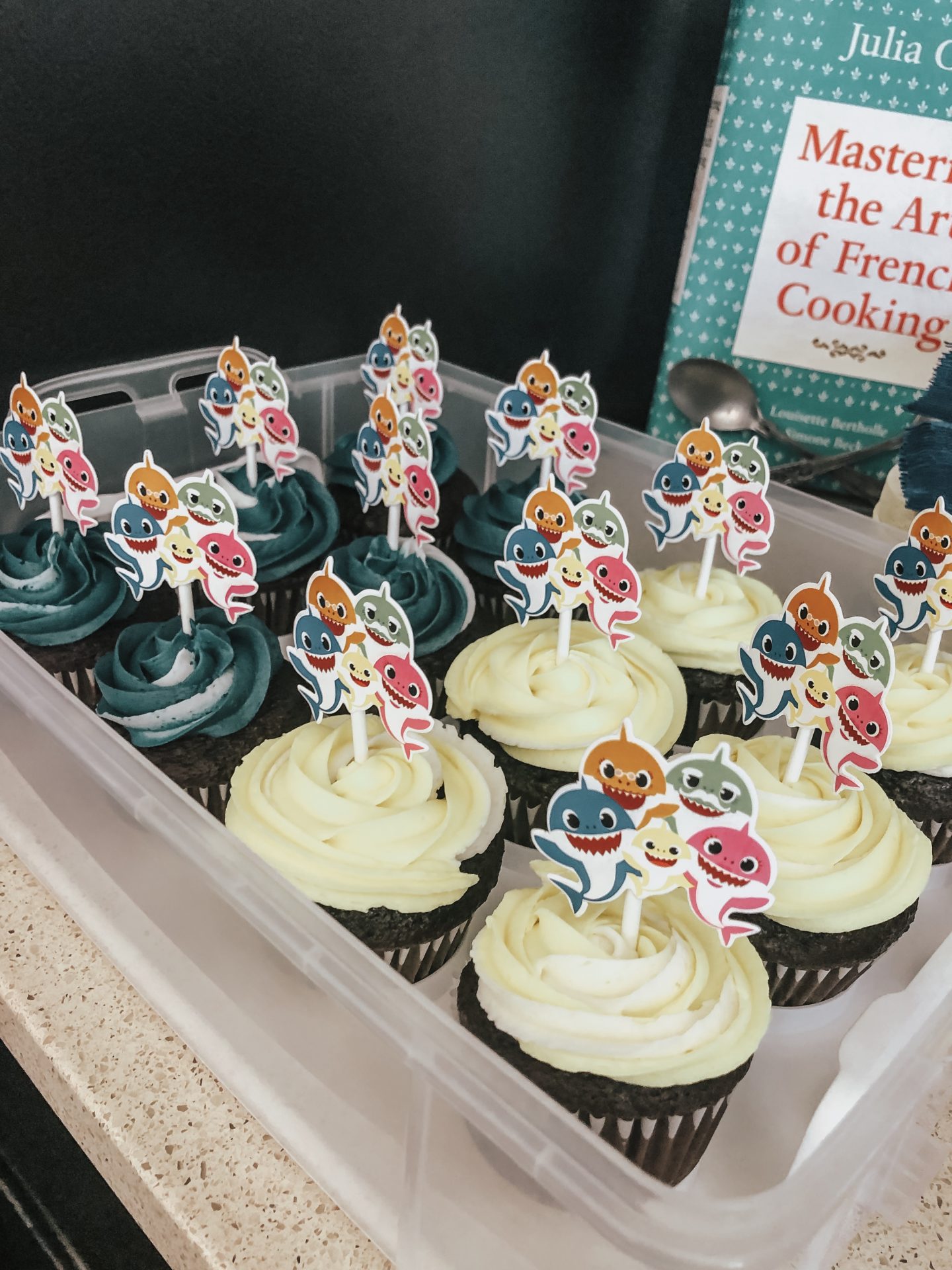 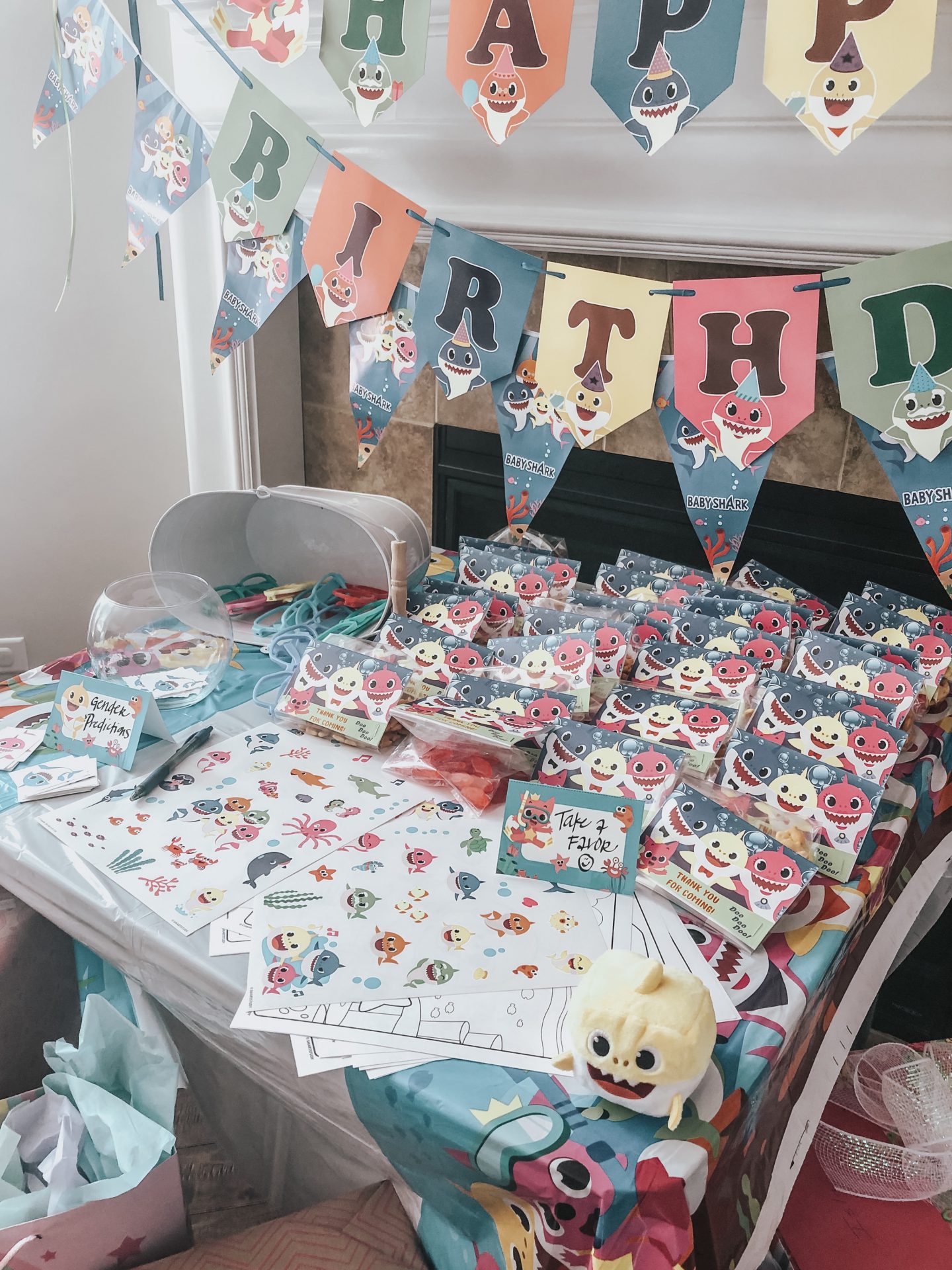 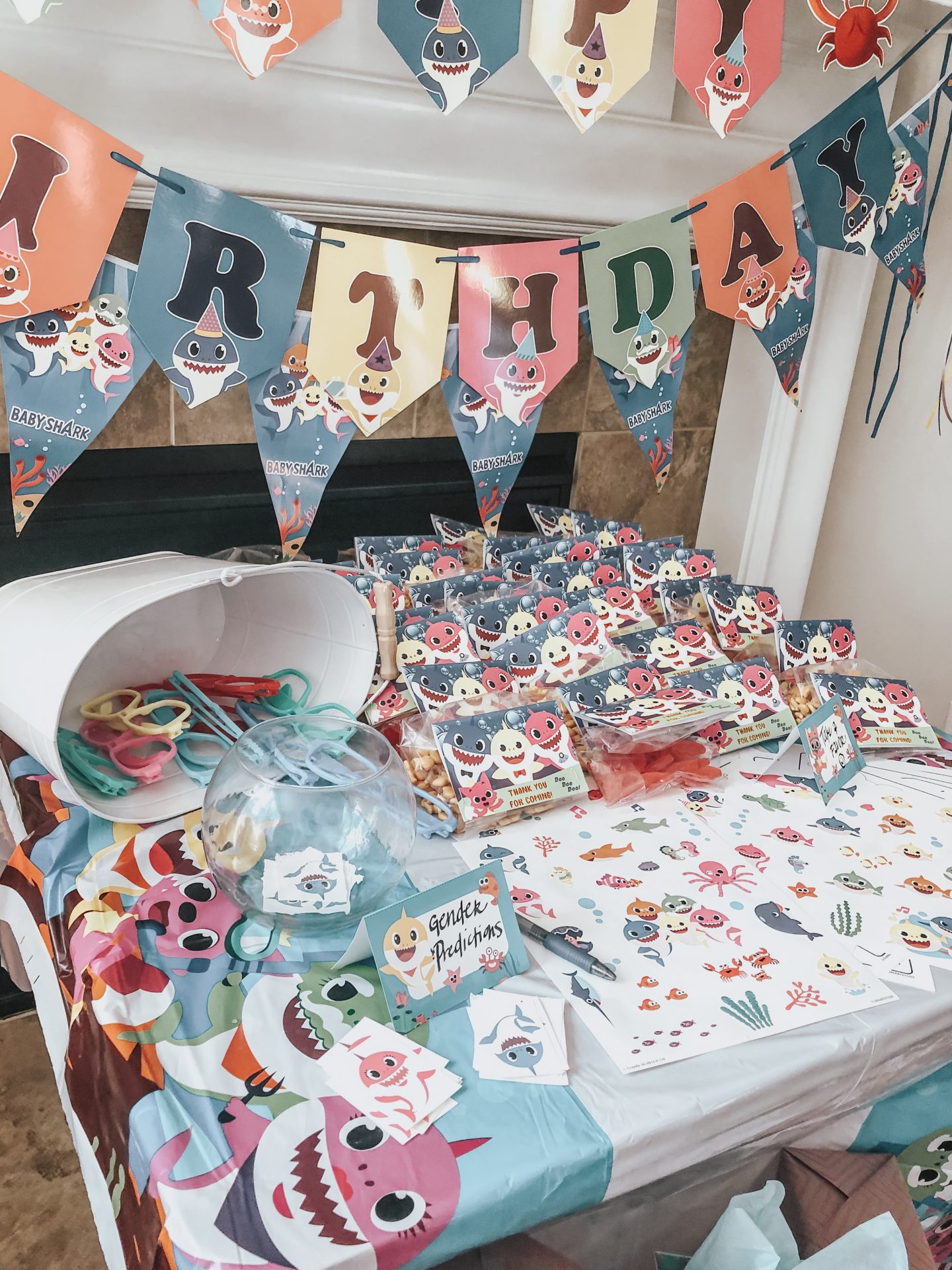 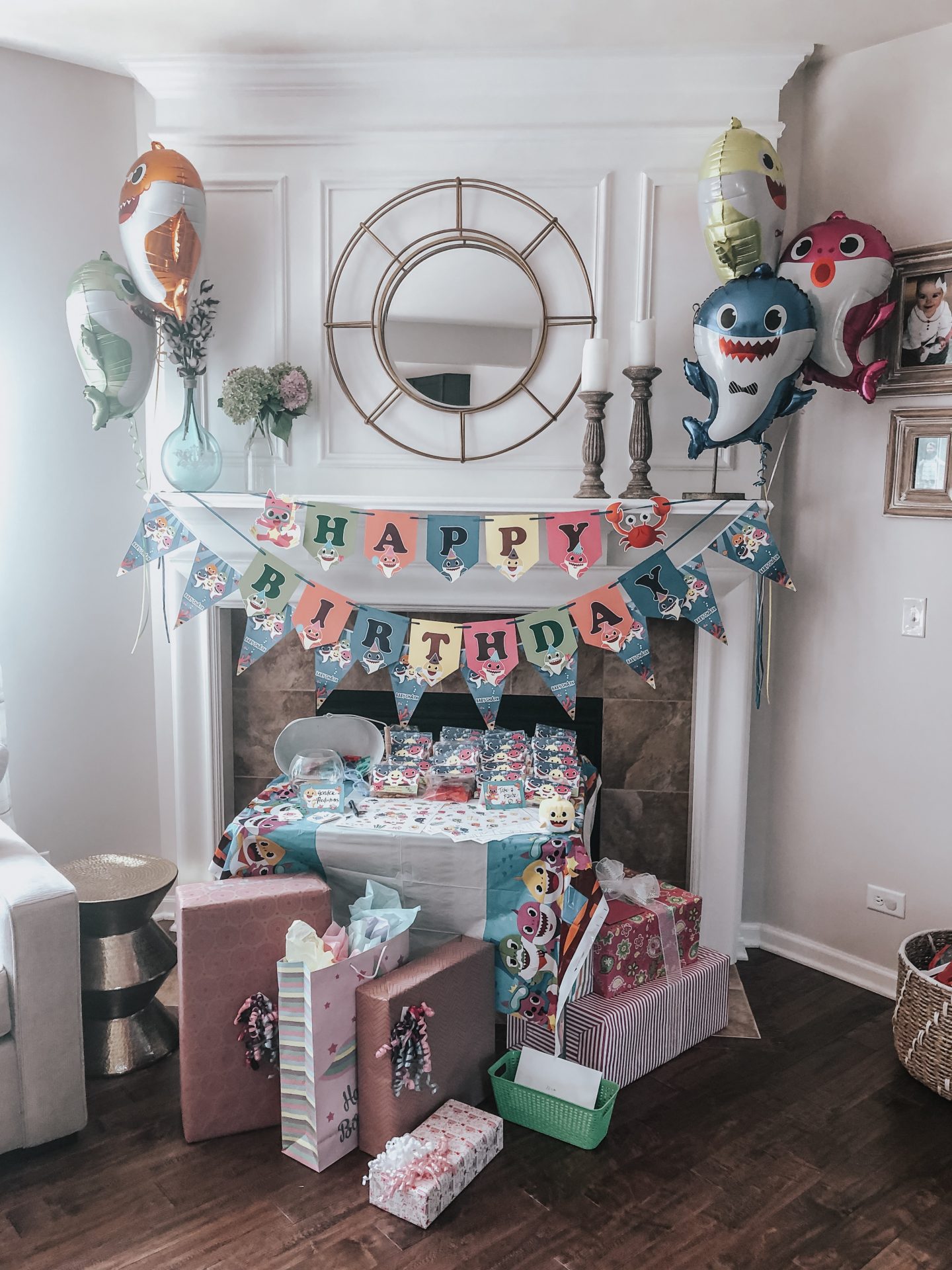 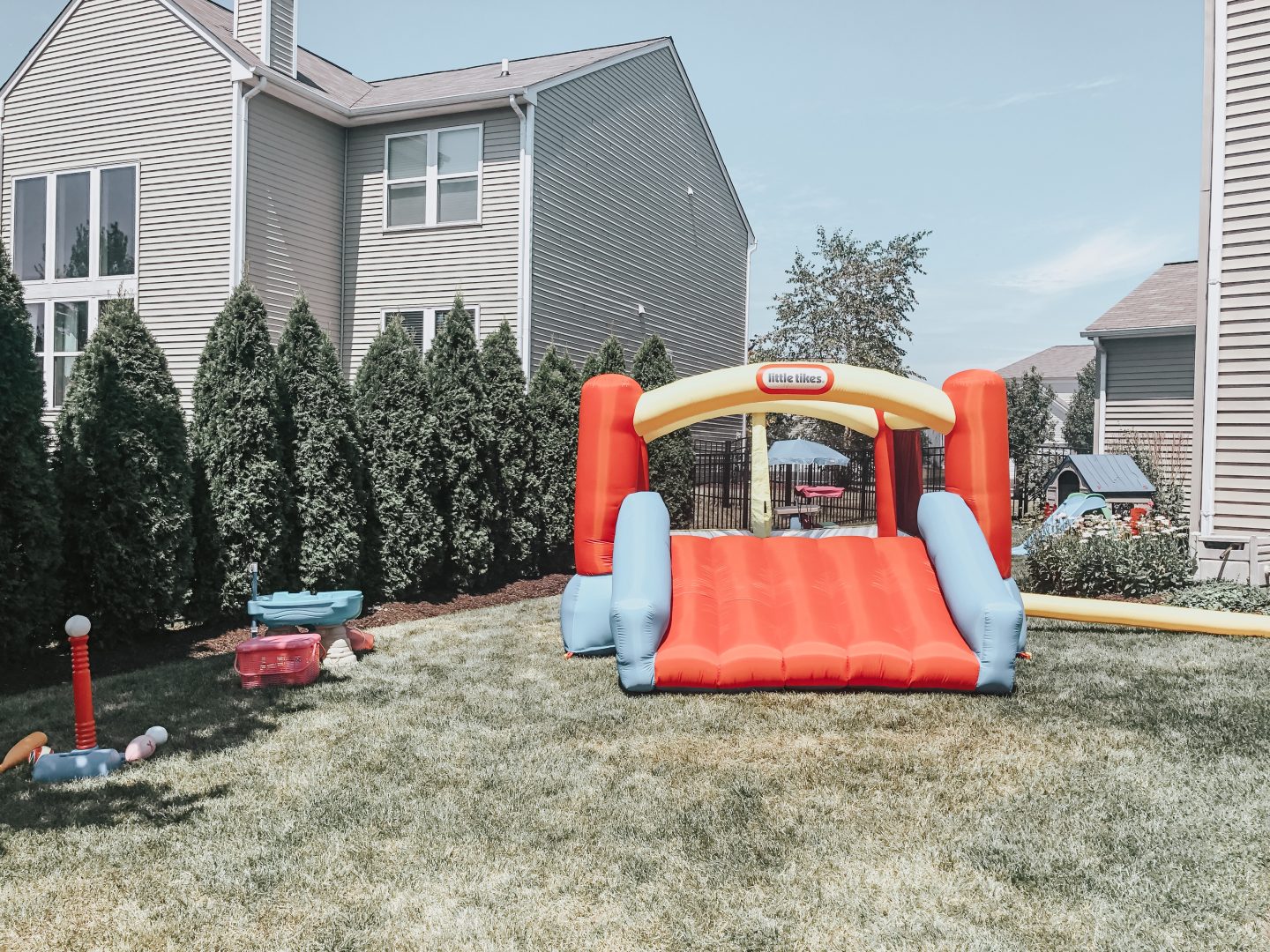 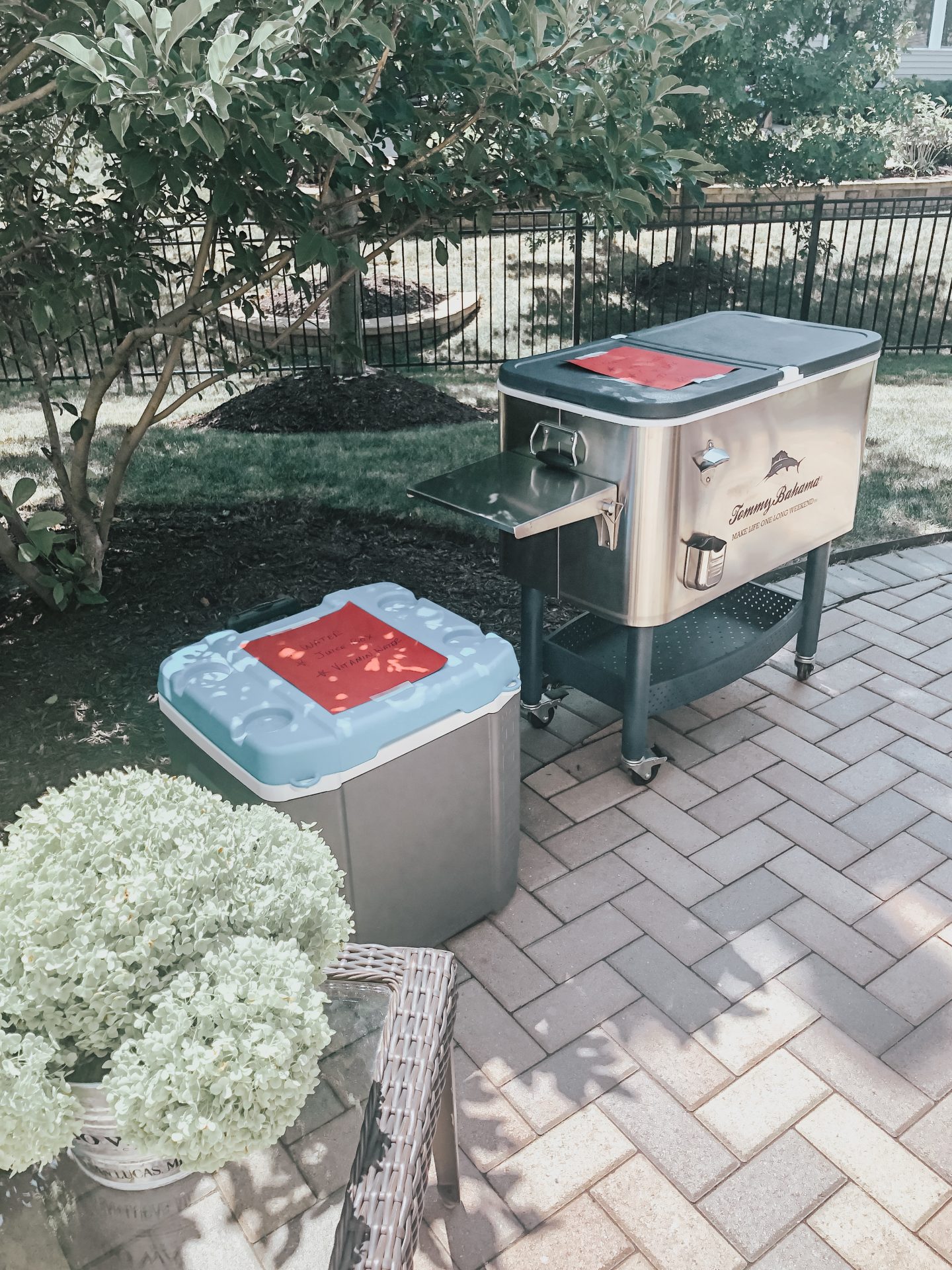 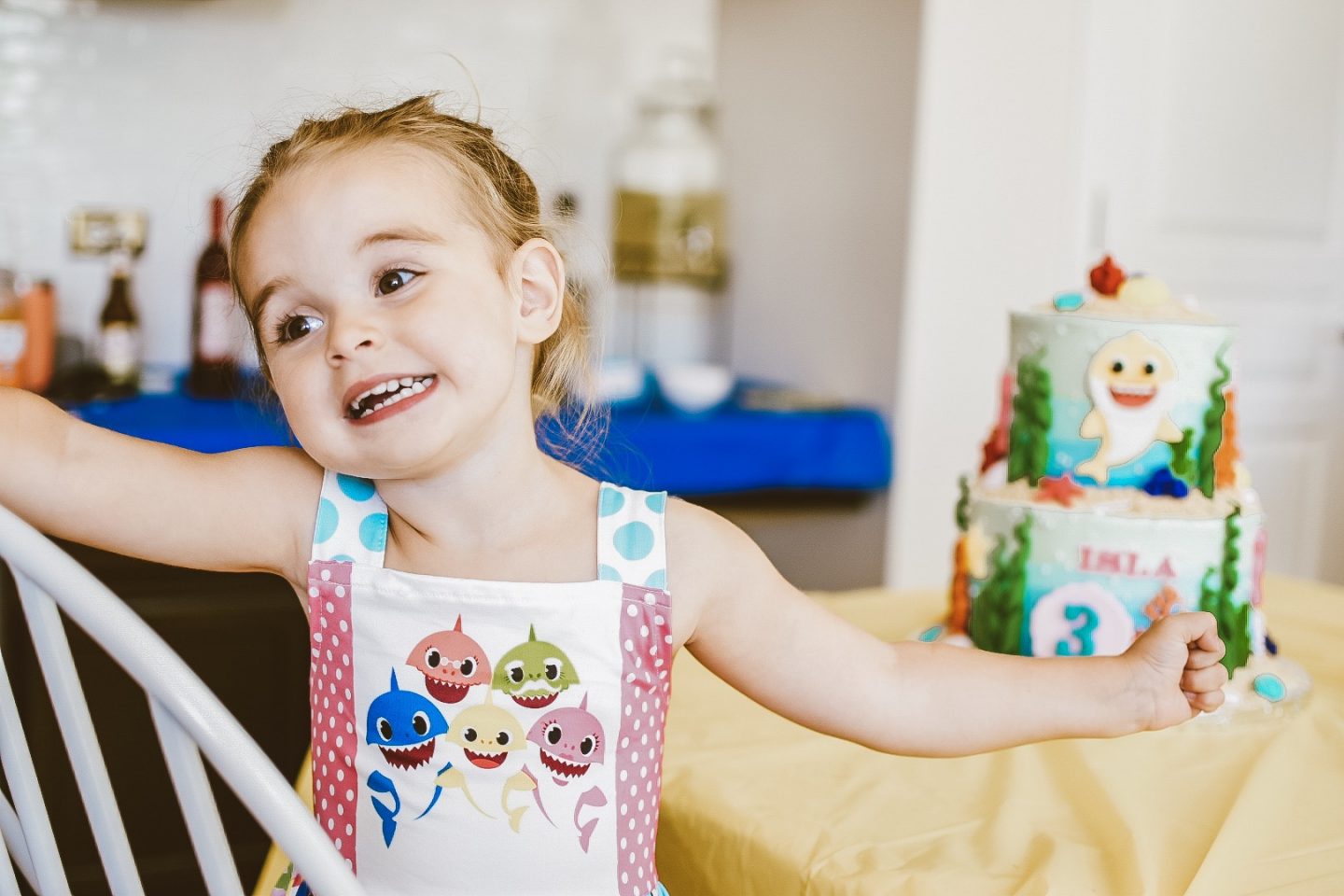 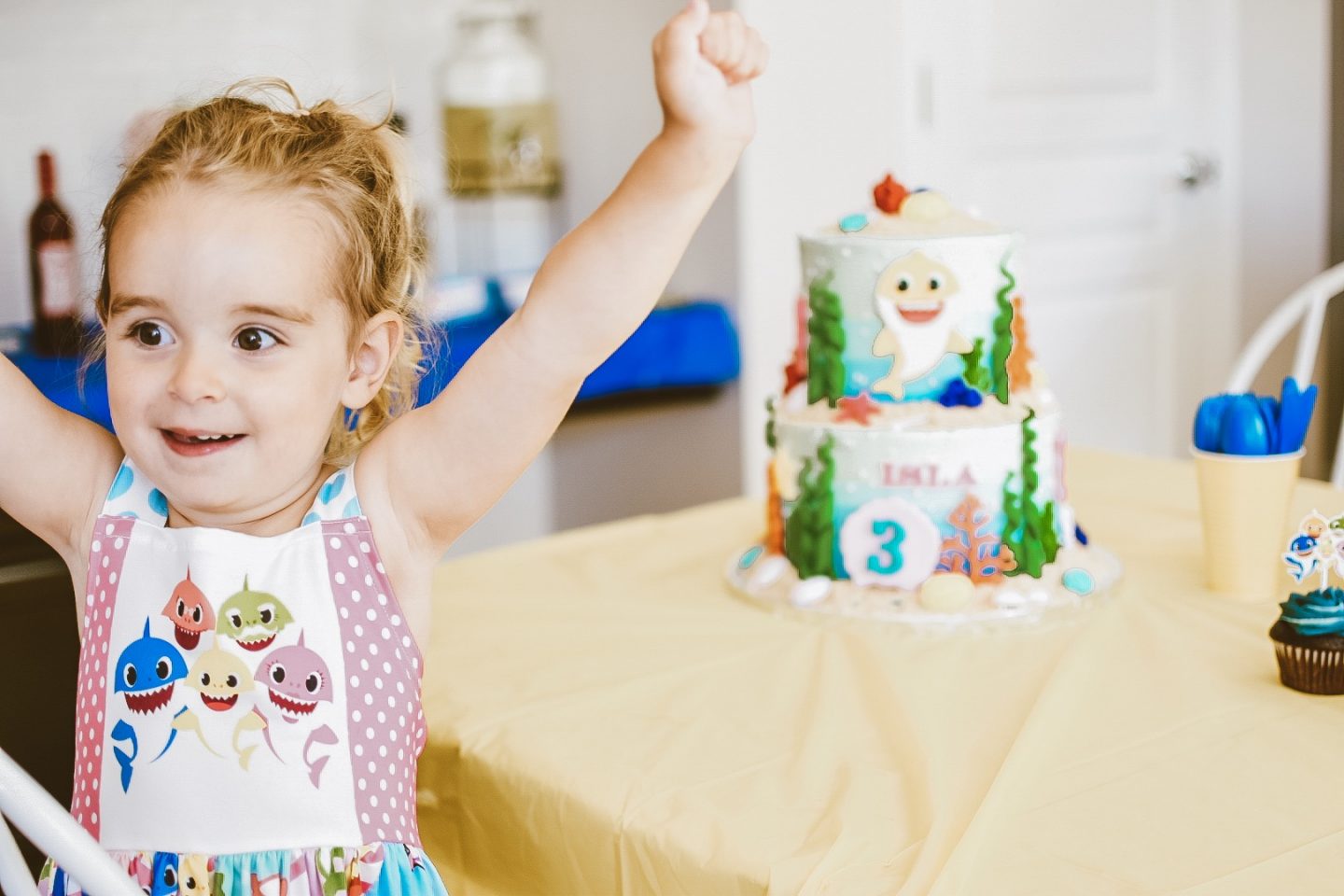 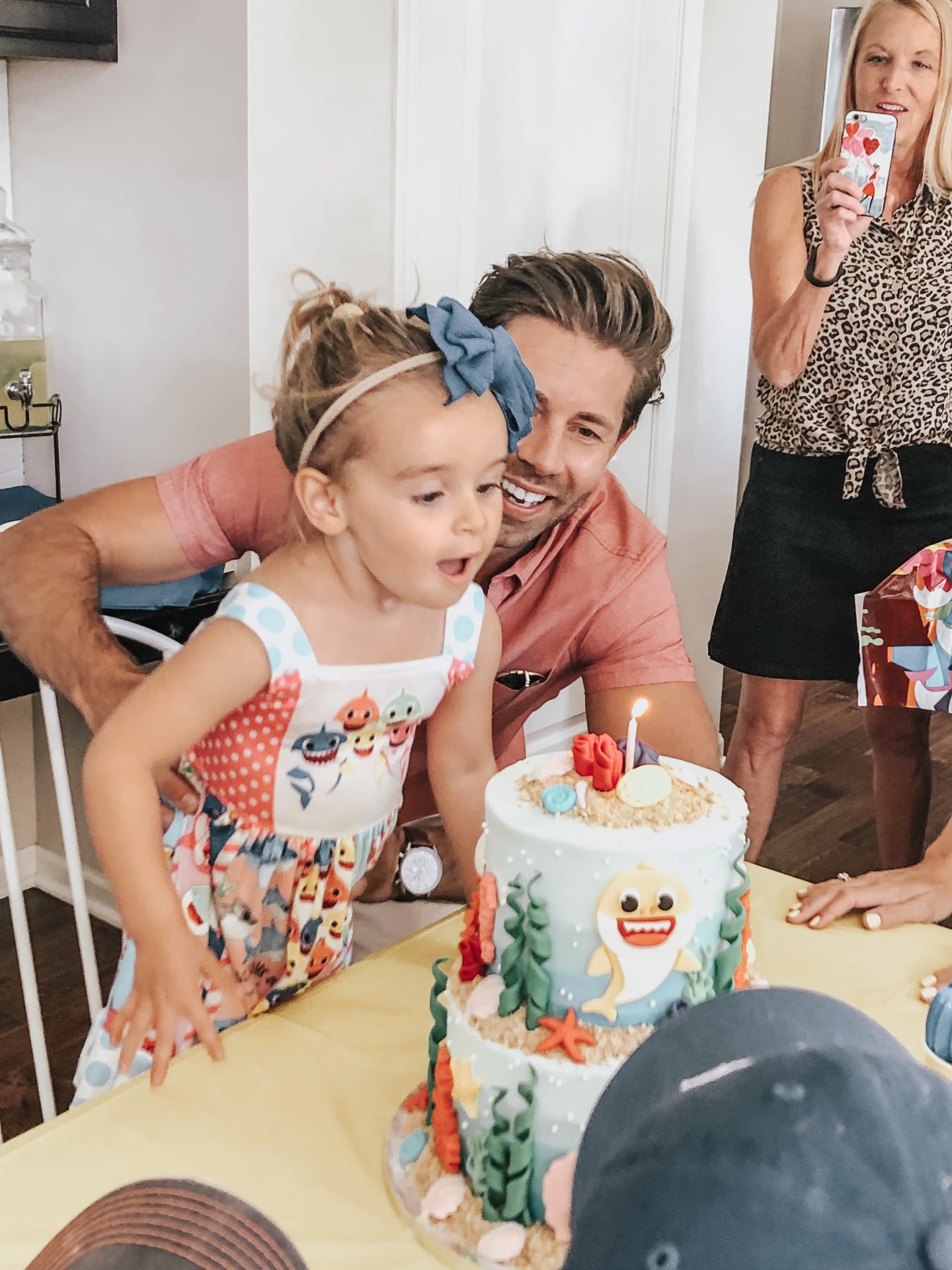 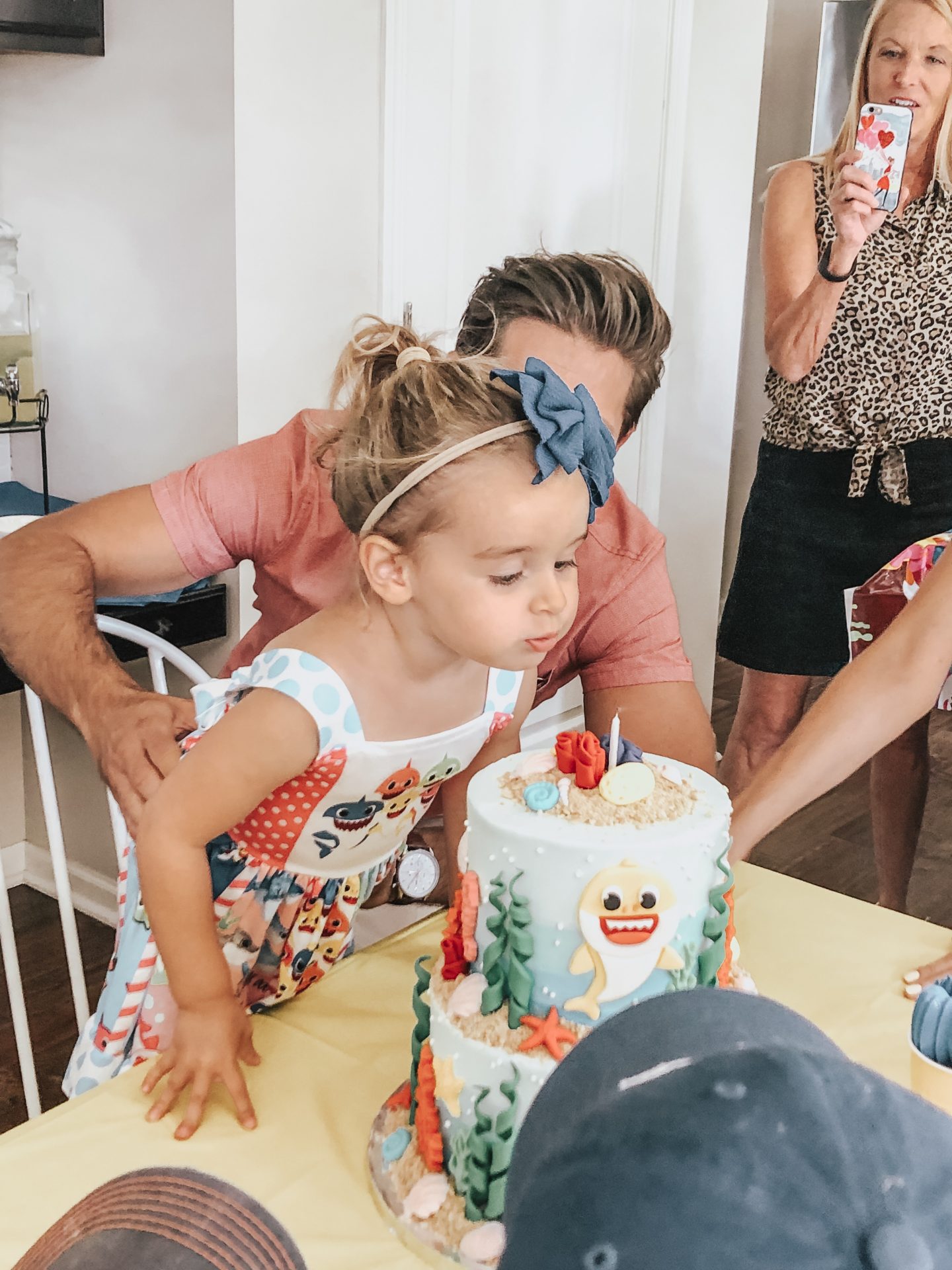 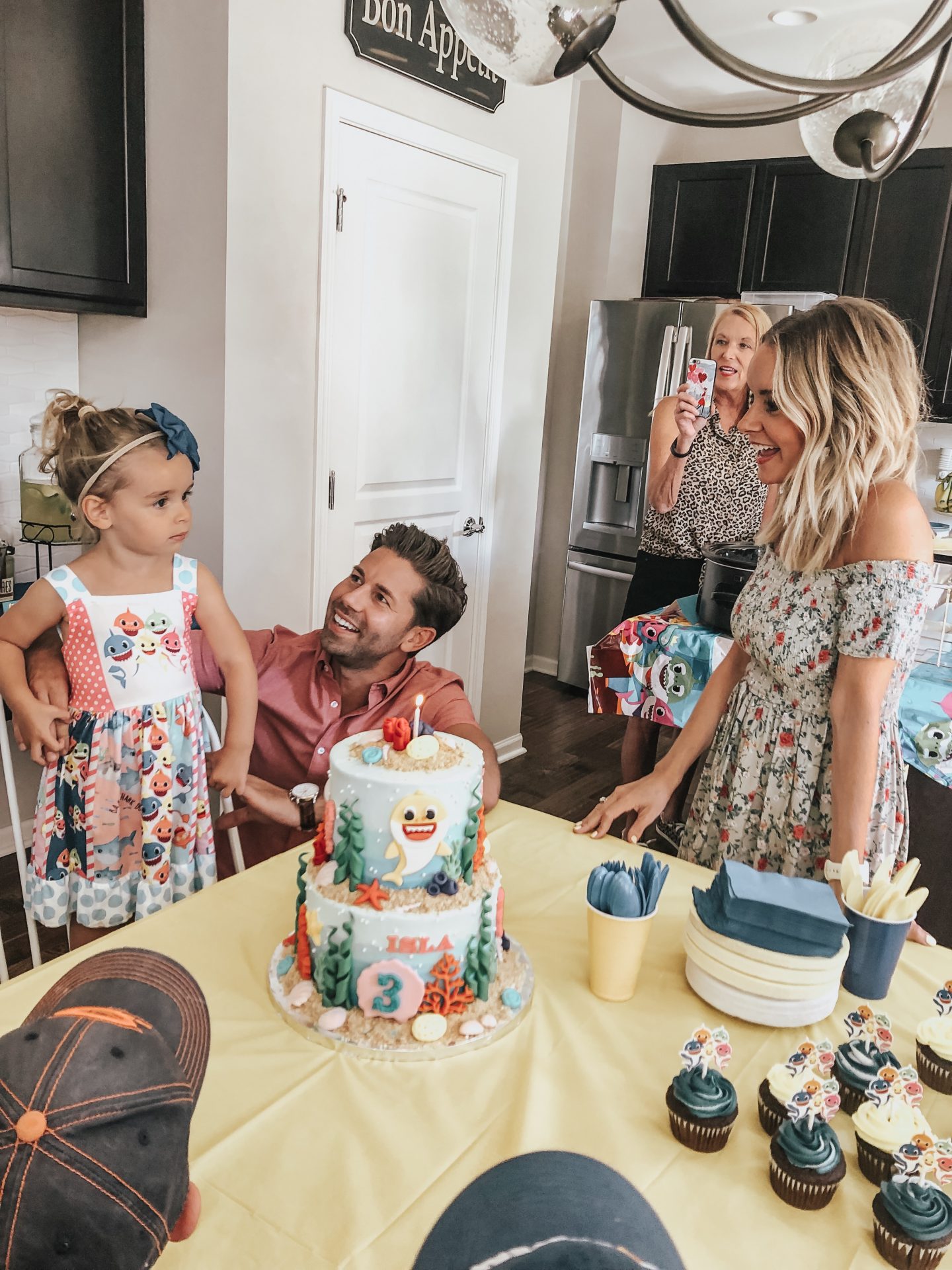 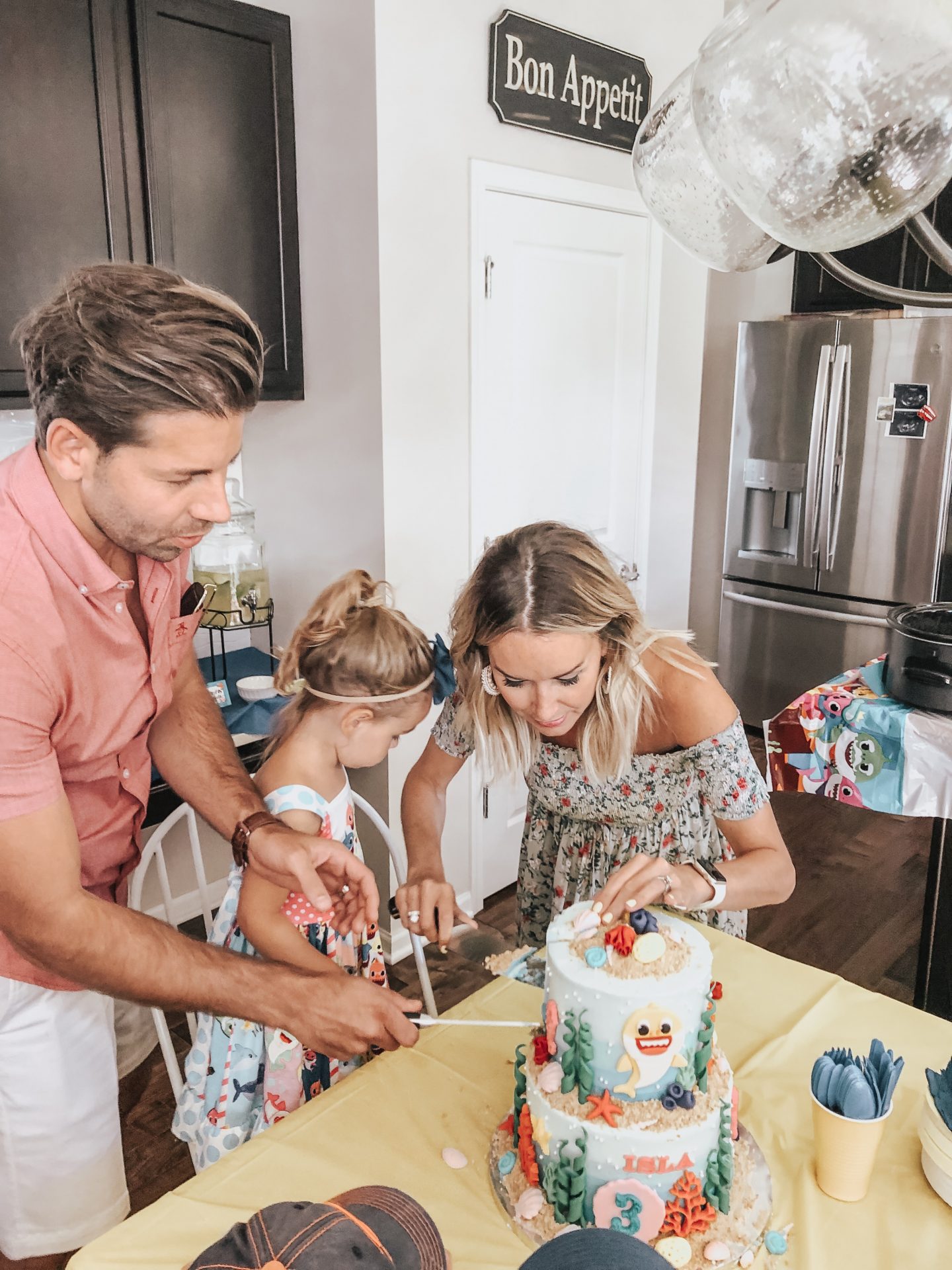 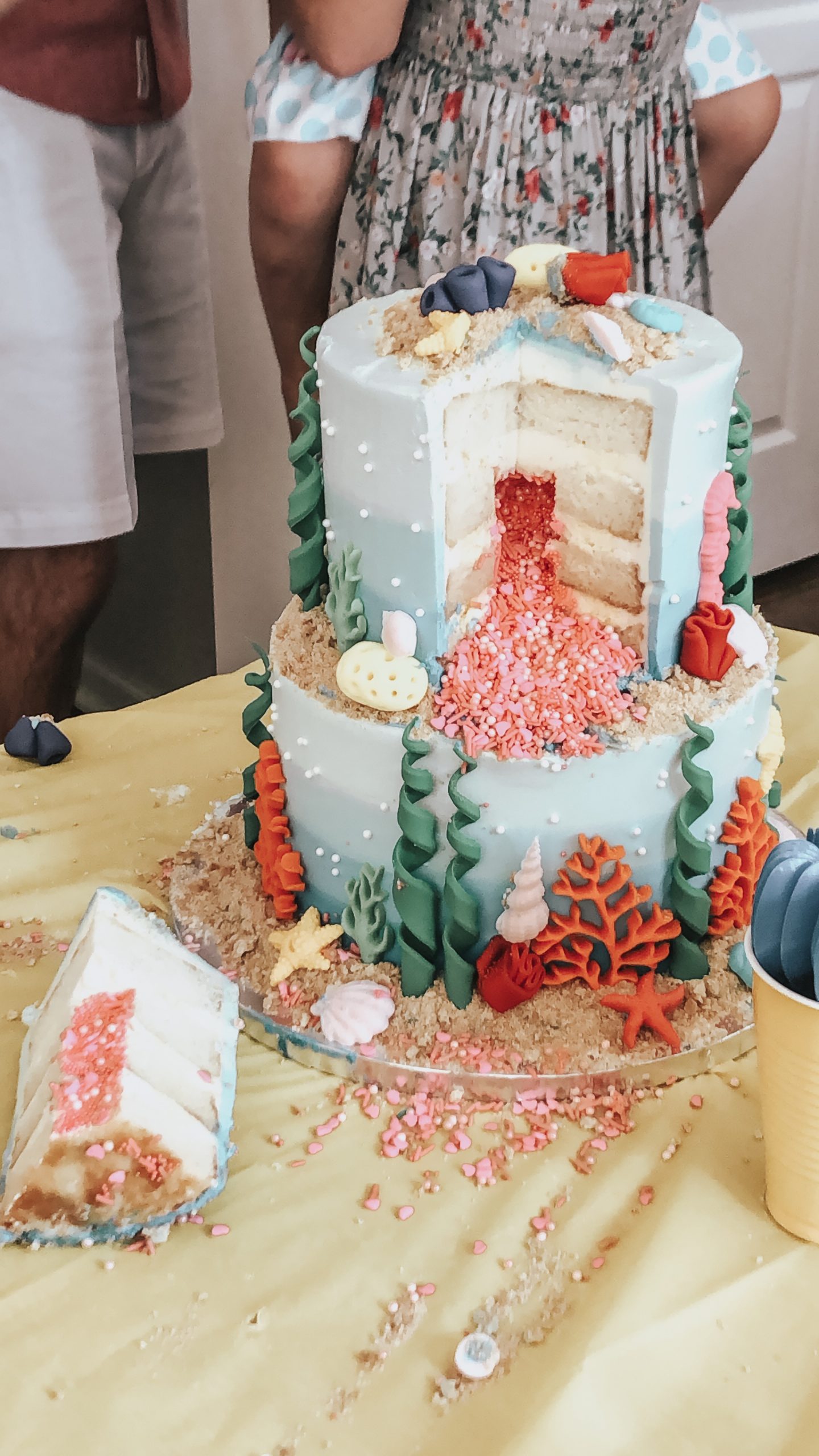 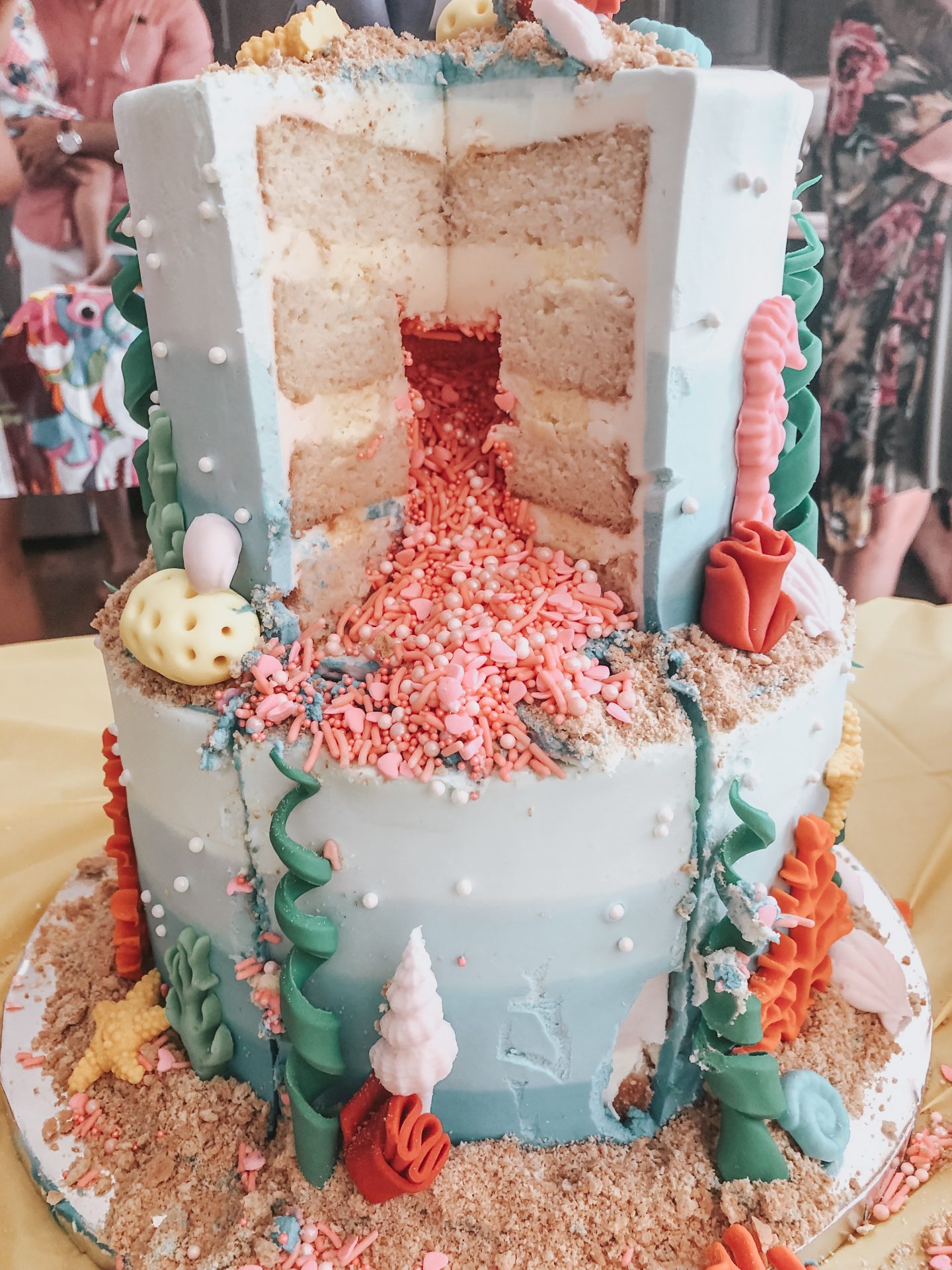 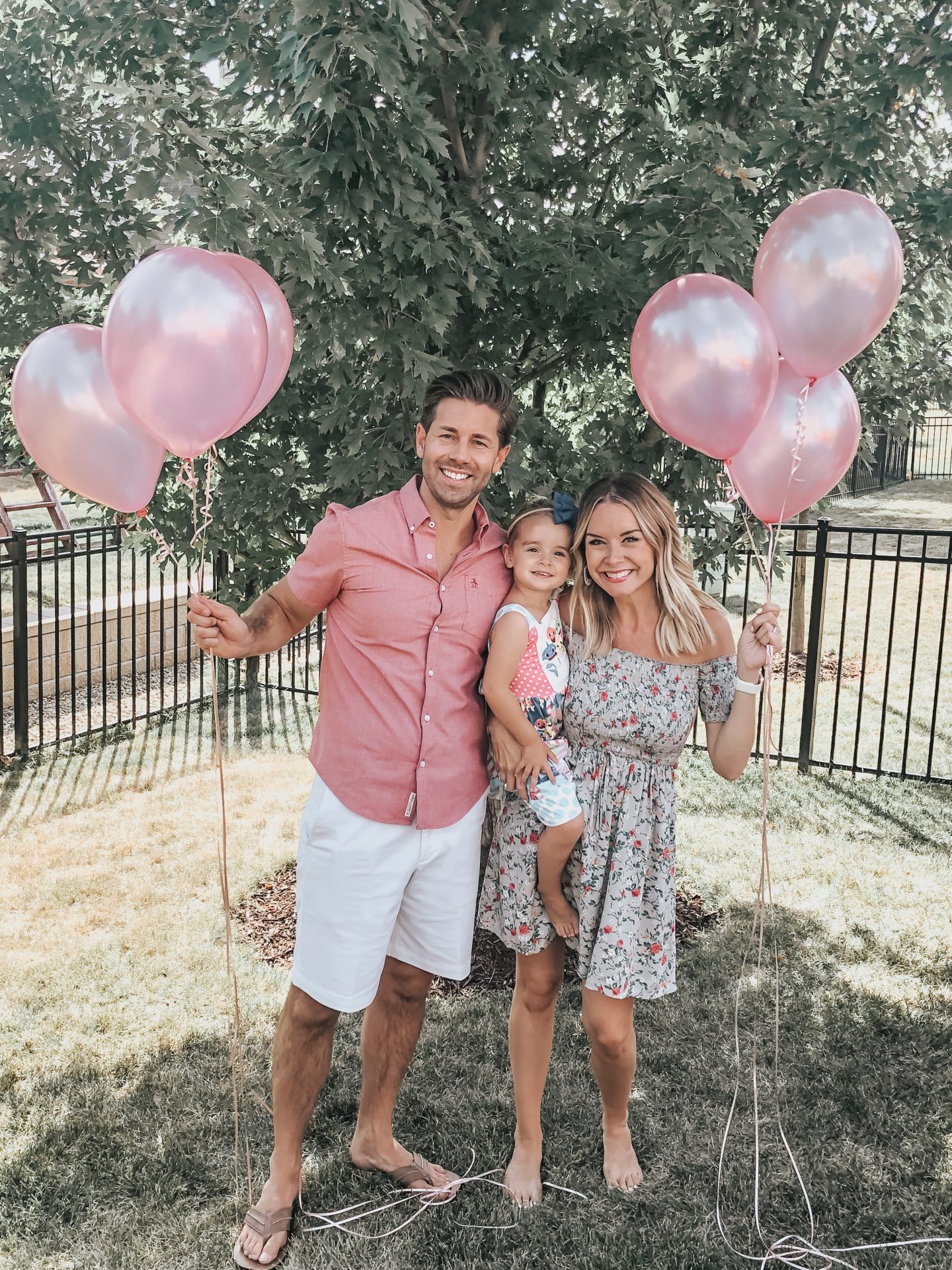 **By the way, Isla’s birthday cake/the gender reveal was the cutest cake ever, incredibly delicious and done by an at-home baker.  Her name is Whitney and her email is whitneyswhimsicalcreations@gmail.com .  I wanted to share this because she is looking to get her business off the ground and she really does stunning work.  If you’re in the western suburbs, you’re missing out if you’re not using her!

And my girlfriend Lea made the adorable chocolate cupcakes – she did the unicorn ones for Isla’s first birthday and is amazing – her email is gallol@net.elmhurst.edu , so reach out to her as well if you’re looking for some sweet treats for your occasions – she does the most unreal cookies EVER. 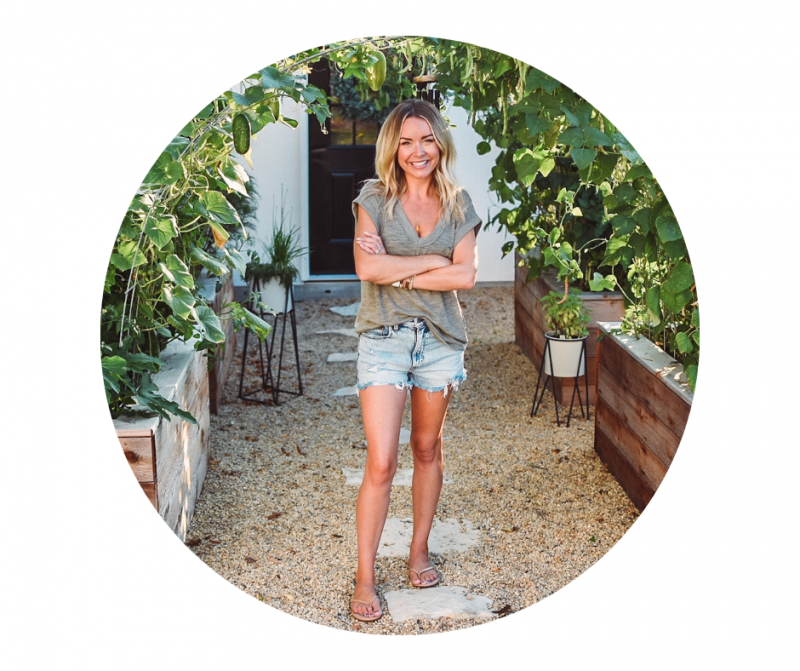