We just got back from Mexico last night and had so many delicious meals (and fair share of cheese dip and tacos) there.  But the first thing I wanted when we got off the plane (other than to see my baby girl) was to enjoy a nice home cooked meal.  You know, eating out is awesome, but there’s something to be said for a delicious meal made from scratch.  So the first thing I did was order a Lou Malnati’s pizza.  (True story – our flight was delayed a bit and we didn’t get home til almost 9…I basically had no other choice).  But the neeeeext thing I did (today) was make a good ole fashioned meal.  Chicken noodles and dumplings!  And it’s a perfect meal to make when you have other things going (like unpacking, laundry, chasing a baby etc.) because there’s a lot of cook time where it’s just simmering away, developing flavor.

It’s been one of my favorites my whole life and both of my parents make it a bit differently.  So when I was in high school, I had each of them teach me how to make their version.  I’ve basically combined what I like most about both of them, added a few things, and come up with my own.  So I’ve been making this for about 15 years now and I think it’s time to share.  It’s so homey and the house smells great while it’s cooking, and I swear, it’s worked as a cold remedy for me over the years.  I hope you enjoy it as much as I do!

(dumplings portion is in link below)

*Reames noodles are located in the freezer section of the grocery store, usually located with the frozen bread.  You can substitute medium egg noodles as well. 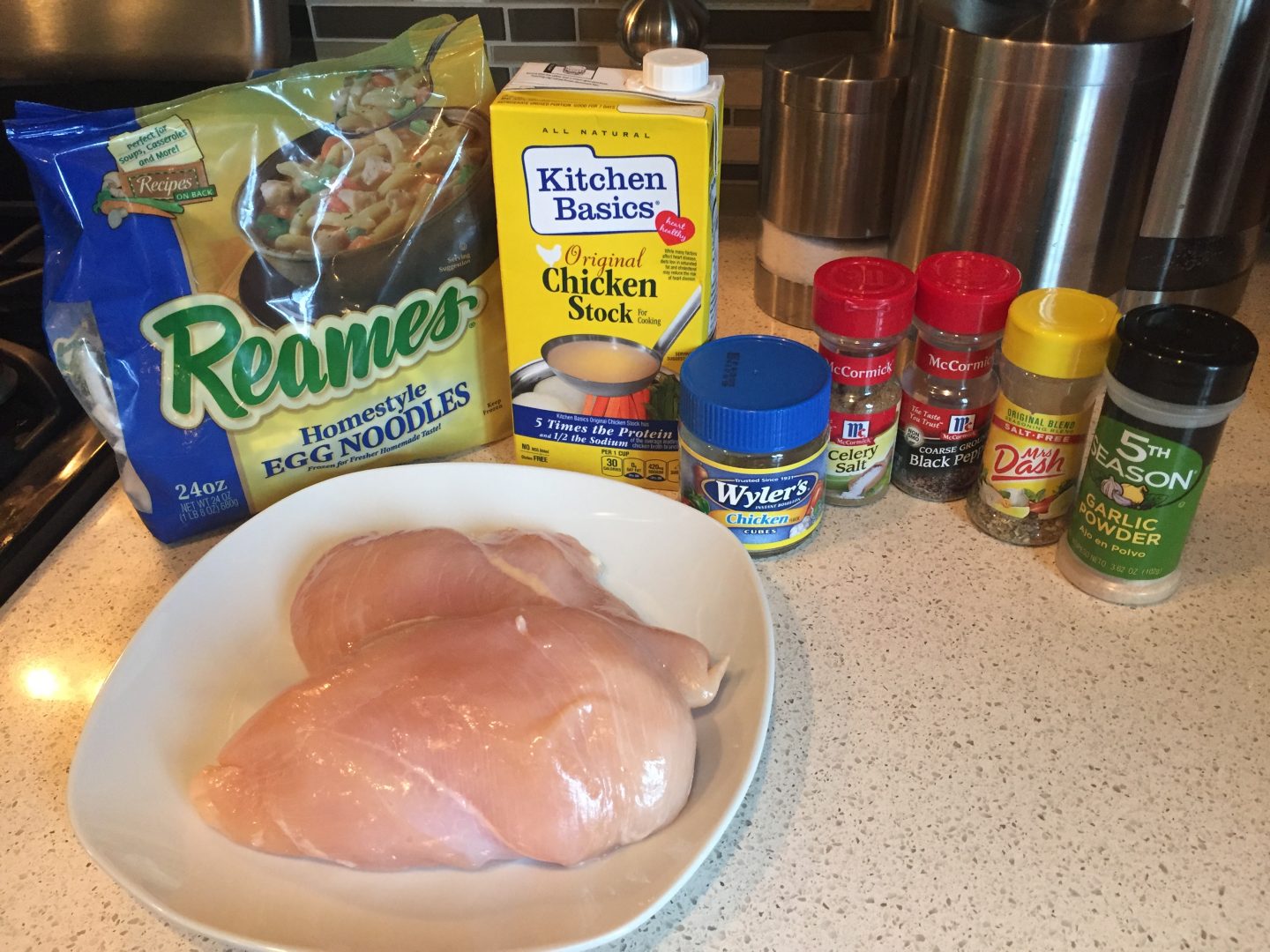 In a large pot, boil 10-12 cups of water and 1 box (4 cups) of chicken stock together.  Add the bouillon cubes and all seasonings (celery salt, garlic powder, black pepper, Mrs. Dash) while the broth is heating up.  Once boiling, add the two chicken breasts in.  Cook in the broth until cooked through (varies based on size of the chicken breast – for these large ones, it took about 40 minutes).  This is the perfect time to get stuff done around the house because it really doesn’t take a lot of babysitting – just stir once in a while.  You may want to add water (2 cups at a time) if it looks like it’s really cooking down and you don’t have a ton of broth left.  Once the chicken is cooked through, take out and shred. 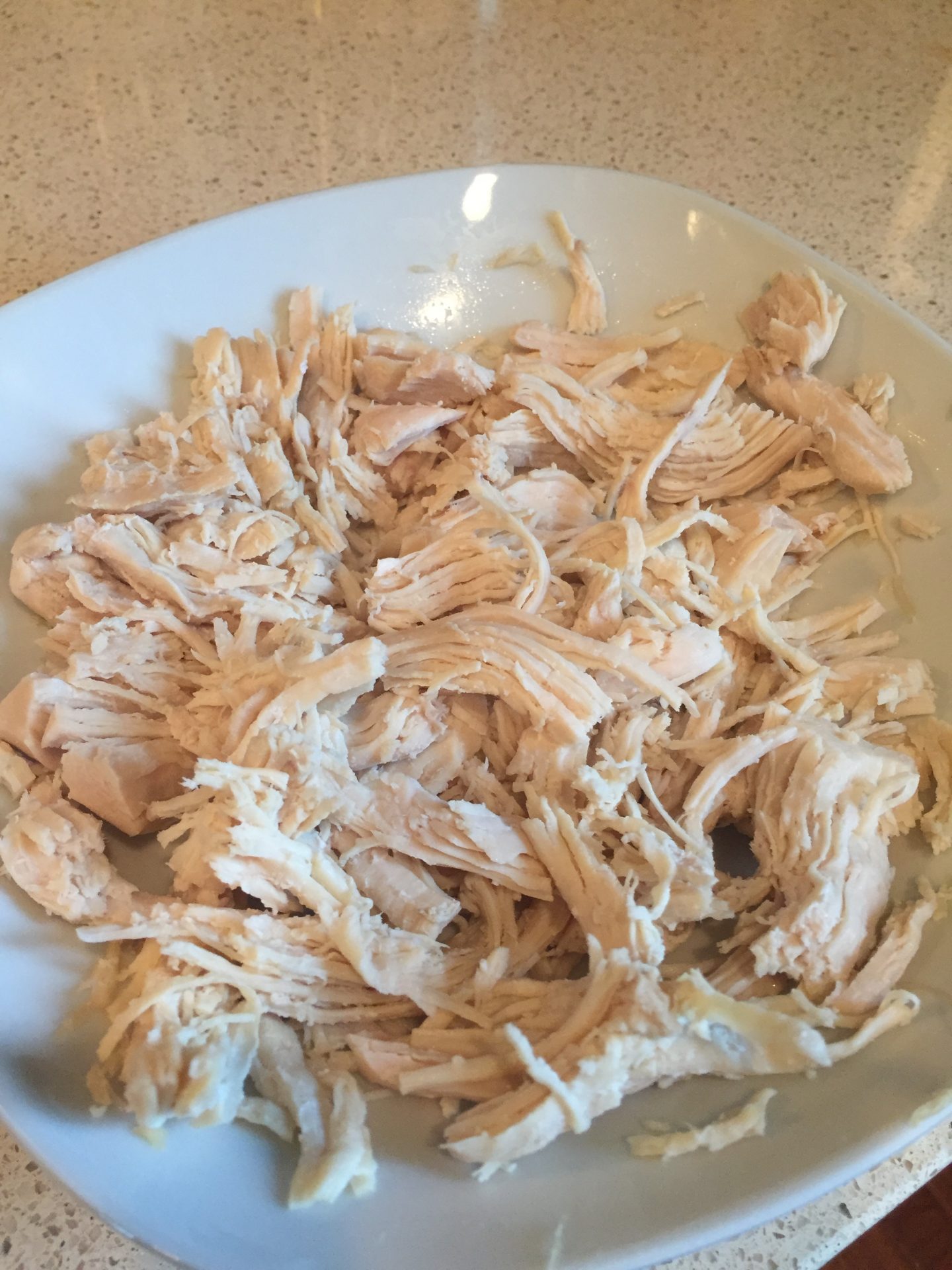 **Before adding the chicken back in, I like to thicken the broth.  This step is optional (hence why the flour says optional) and is just based on if you like a thinner or thicker broth.  If you like thinner broth, just skip this step. I prefer the thick broth and my mom taught me this trick.  She calls it a “slurry” – which is what I call me after 3 glasses of wine. 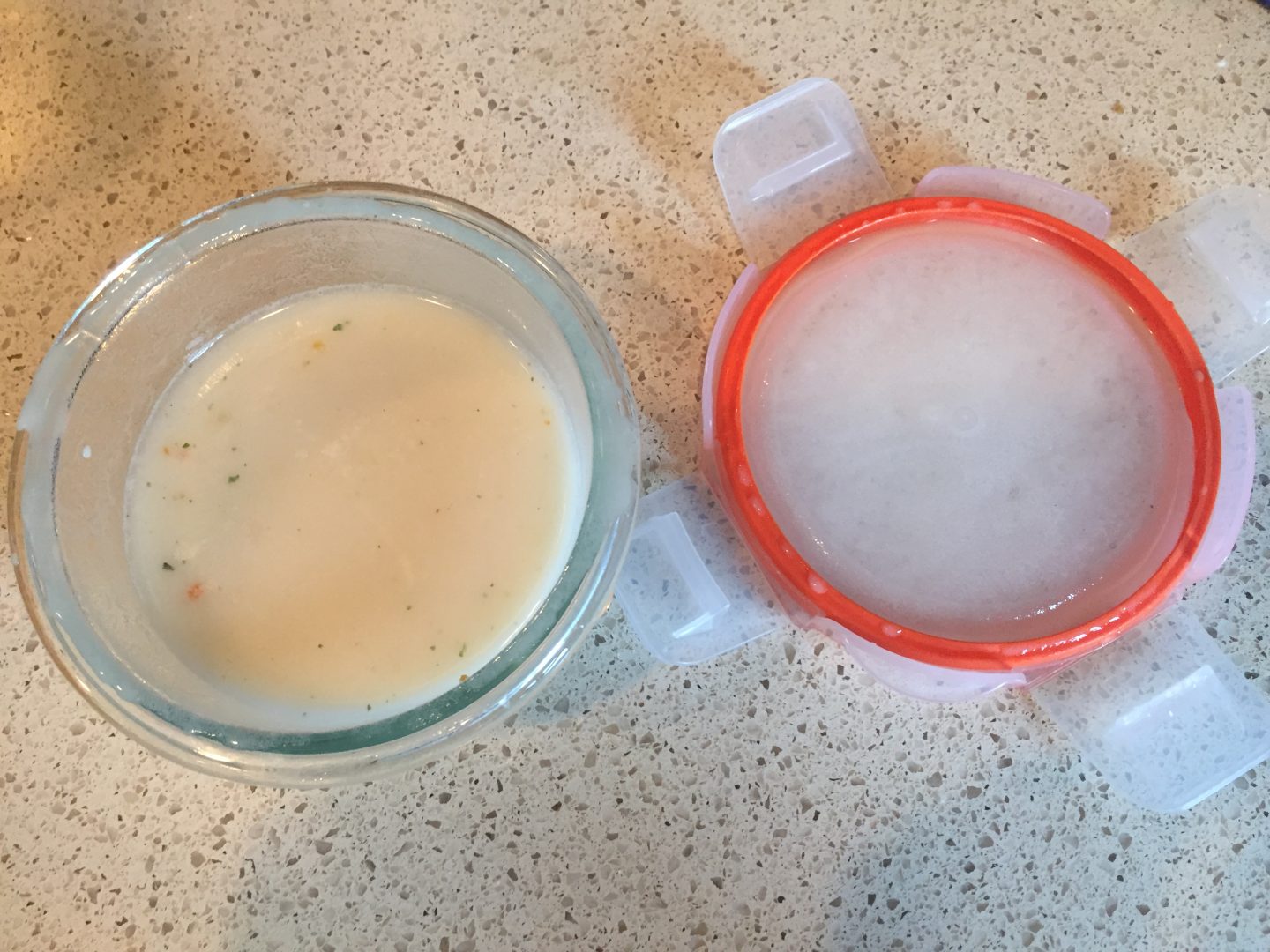 I take 1 tablespoon of flour and add 2 tablespoons of the chicken broth from the pot to it in a small container.  I then add about 4 tablespoons of water from the sink.  Put a lid on the container and shake shake shake until combined – it’ll look like a thin milkshake (with no lumps) like the photo above.  Pour that back into the broth and stir around.  After a few minutes, add the chicken back in. 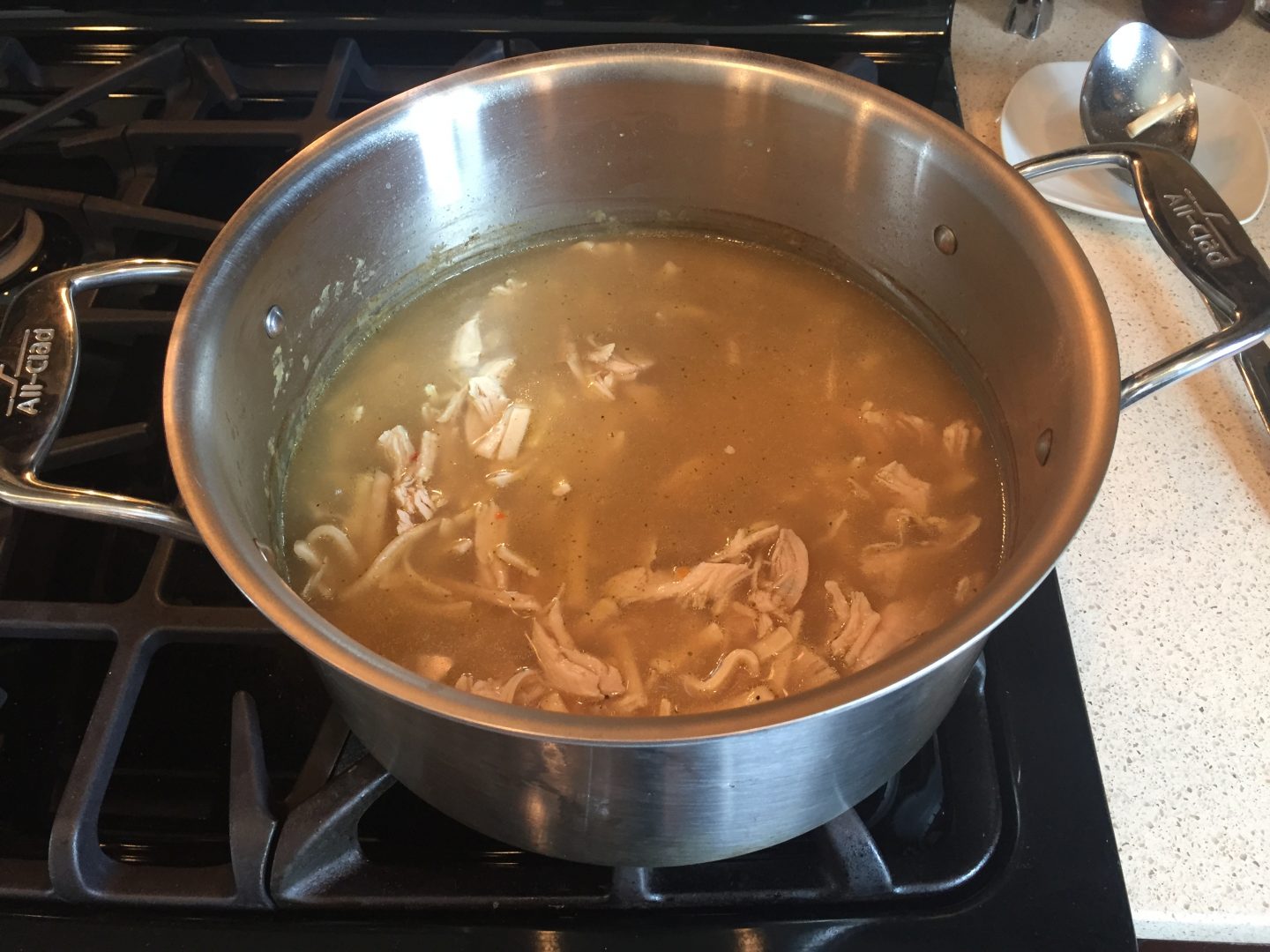 At this time, I make the dumplings.  This recipe is what I use for dumplings.  You probably have all of this in your pantry.  I use 1.5 tablespoons of butter (instead of 1 tbs of margarine) and I use 2/3 cup of milk instead of 1/2 cup (it needs it, trust me).

Another great option for dumplings – that’s a lot faster and easier – is this recipe.  All you need is bisquick and milk!  I add about 1/3 cup more milk than they call for in that recipe as well.

I find that most dumpling recipes don’t have enough liquid in them and the biscuits are dry and don’t plump up.  Adding that extra bit of milk makes all the difference.

Once I get the dumplings made, I add the frozen noodles into the chicken and broth.  I keep the heat on high for 5 minutes.  I then spoon the dumplings in, lower the heat to medium-low and cover for 15 minutes. 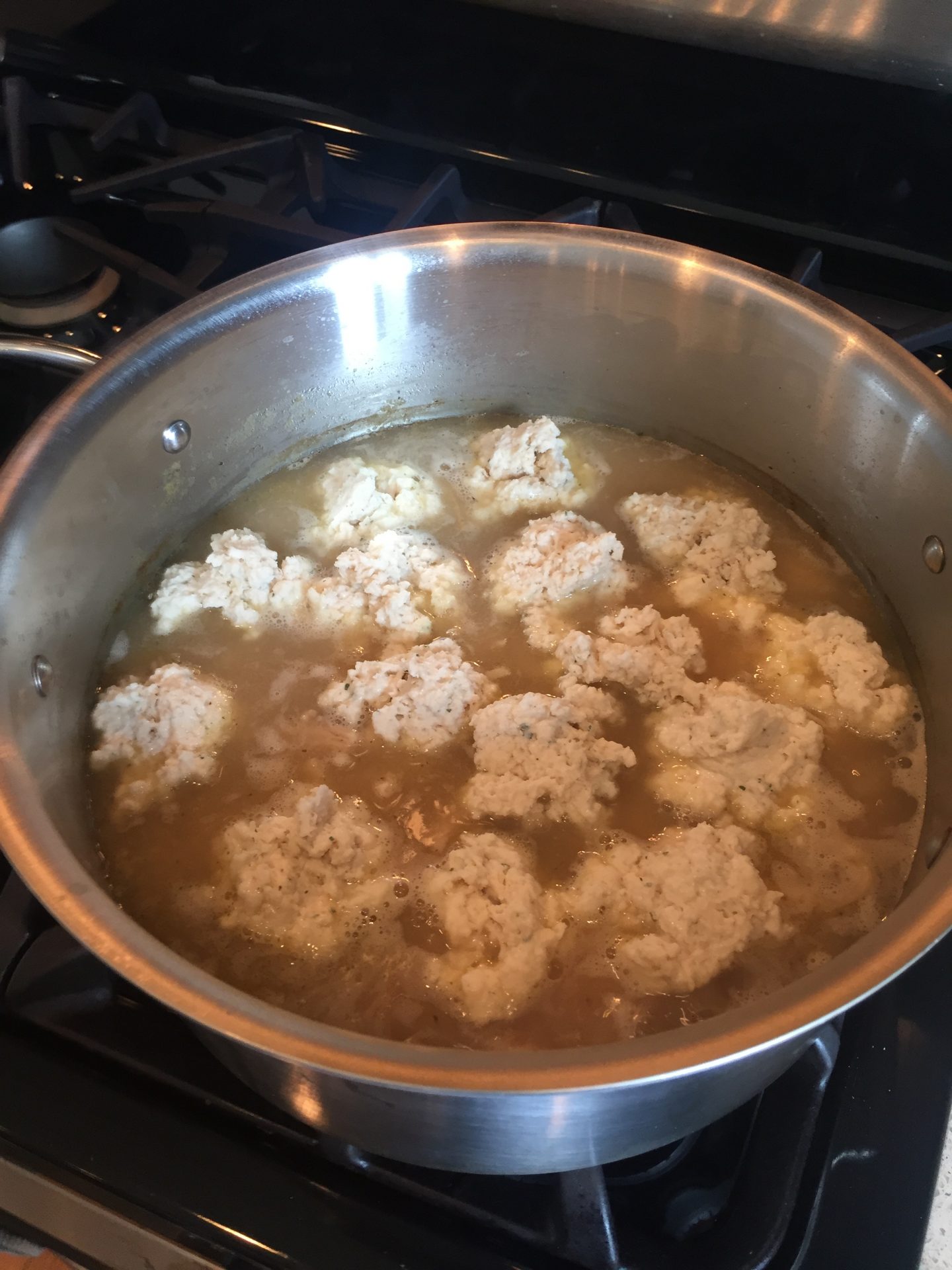 And that is it, my friends!  I hope you find it as homey as I do! 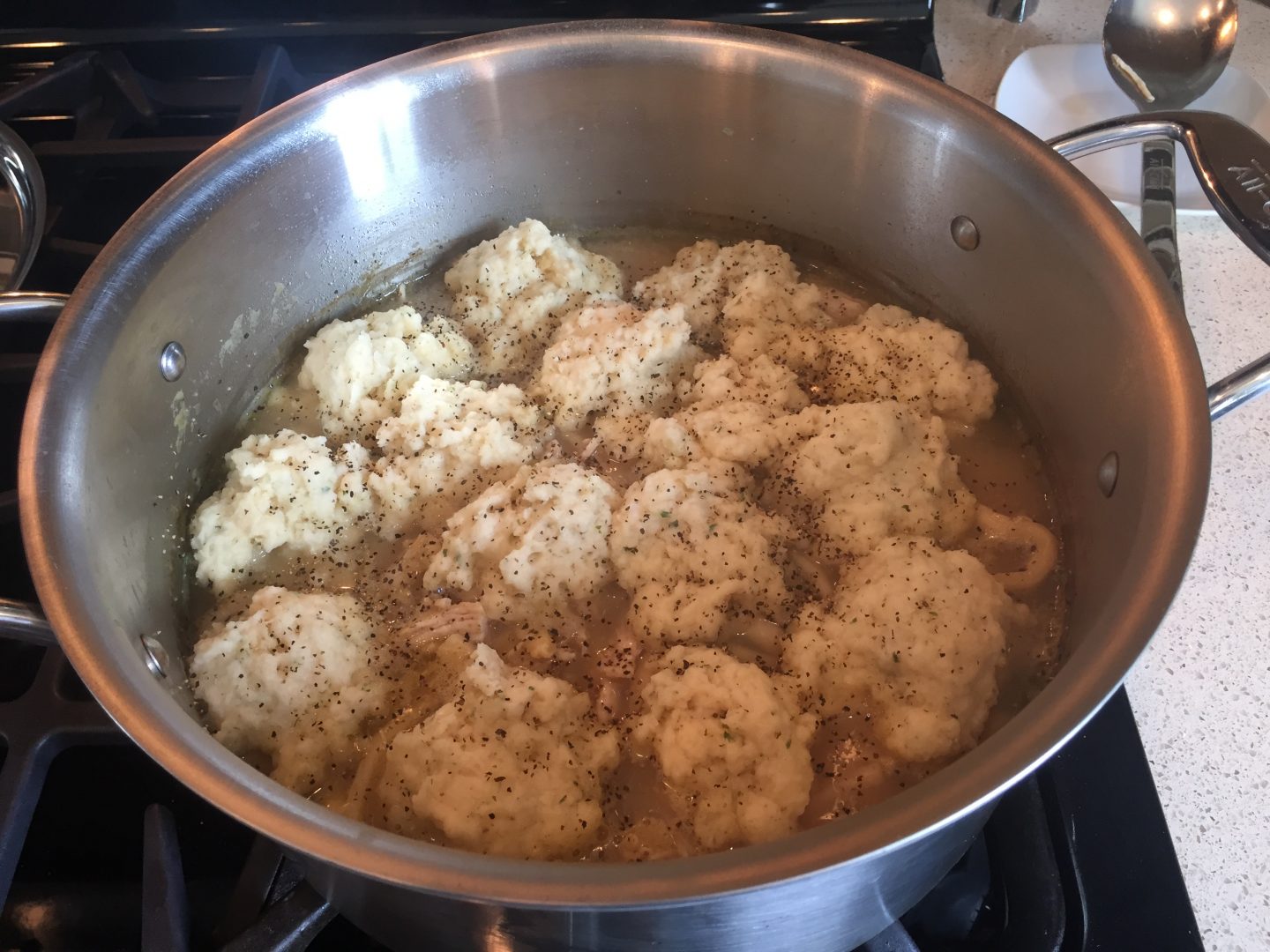 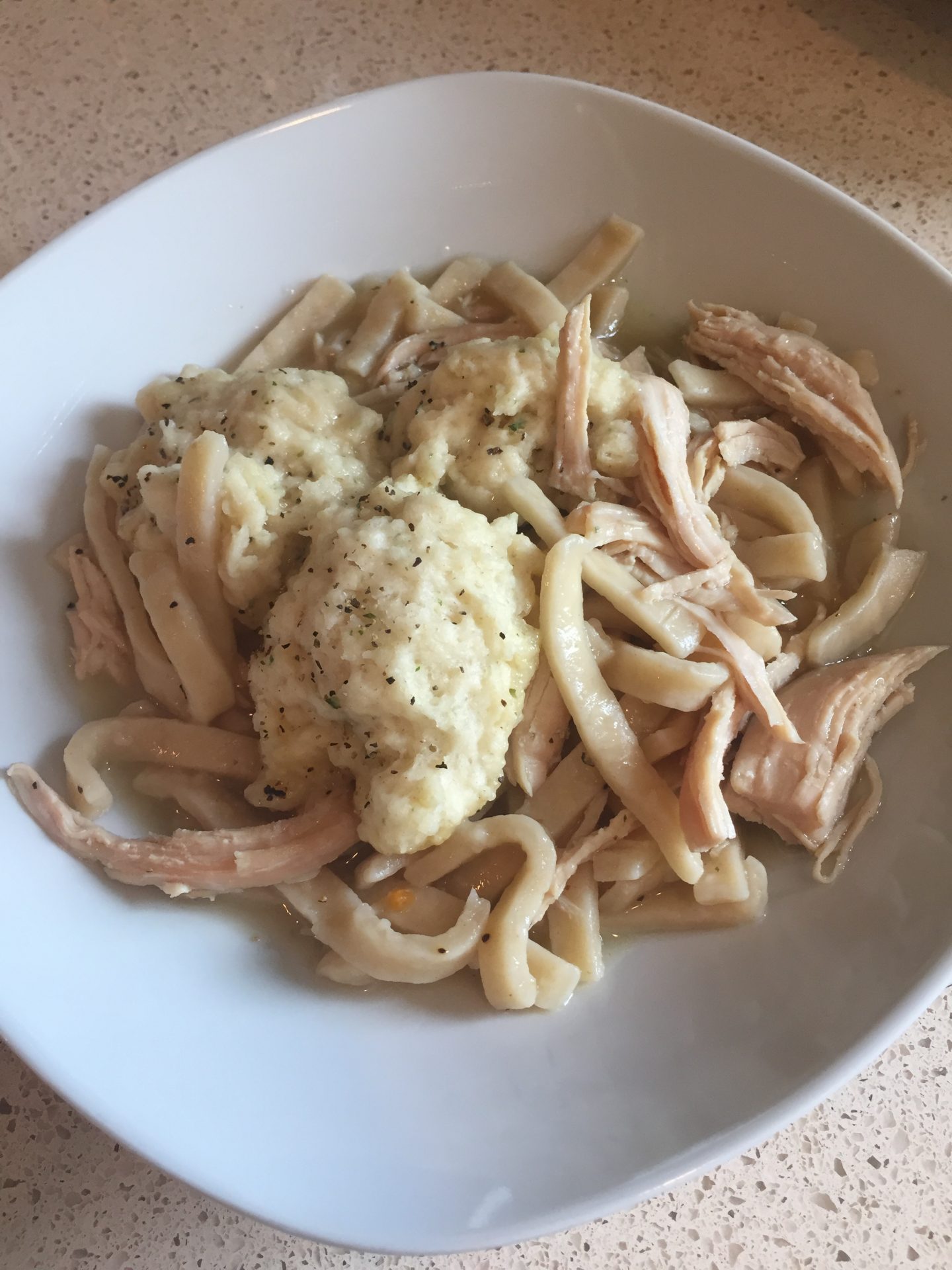