I hail from central Illinois.  I grew up in a very small town, with about 5,000 people in it.  So we didn’t have lots of chain restaurants around us… we were basically a suburb of another central Illinois town.  But what we did have was like the golden ticket.  We had a secret gem of a place to eat called KREKEL’S!  And I’m not exaggerating when I say that they have THE. BEST. BURGERS.  Seriously. If you’ve ever visited Decatur, Mt. Zion, or Springfield, Illinois, hopefully someone loved you enough to take you there.  This is that place that we never miss when we visit my family.  This is the place that my extended family that lives out of the state goes to multiple times when they come into town.  This is the place I bought my bridal party for lunch on my wedding day because I just had to have it.  This is the place where dreams are made, people.  Ok, I might be getting a little cray cray about this, but I’m just telling you, these burgers are one-of-a-kind-amazing.

So you’re probably thinking they’re some big ole juice quarter pounder or something, cooked to a nice medium finish, or some jazz like that.  Nope.  These bad boys are thin as can be and literally like smashed into being even thinner when they are cooked on the griddle.  And what done-ness are they cooked to?  I have no idea.  If I had to say, I’d err on the side of well done.  But they don’t taste well done.  They just taste perfect.

So I’ve tried to find a burger anywhere close to it here in the Chicago suburbs where we live now, and there’s nothing even close.  So THAT’s where my making of cast iron skillet burgers came in.

Now, I am not evennnn going to pretend that these are as good as Krekel’s.  Nothing is or can be (I think I have driven this point home enough).  But they’re really good.  I use eggs in them to keep them moist but I make them as thin as I can and then smash them down while I’m cooking them.  The recipe and cooking process is listed below.

So if you’re ever in central Illinois, please do yourself a favor and get to your nearest Krekel’s.  Oh, and get the crinkle fries and a hot fudge milkshake, too.  You won’t be disappointed 😉

But in the meantime, try this recipe! =)

In a large bowl, crack the egg and scramble it.  Add in additional seasoning at this time if you’re going to use it (adding to the egg helps the seasoning evenly distribute throughout the meat).  Usually about a teaspoon should do.  Combine the ground beef, scrambled egg, and breadcrumbs with your hands until it’s evenly combined.  Sure, this seams like you’re kind of making meatloaf, but I promise it doesn’t taste like meatloaf ;).  Then the pat the meat down in the bowl so it’s level across.  Score the beef once down the center and then quarter it.  (See pic below… you just use your hand to make a line in the meat – that way you get 4 equal sized burgers, instead of baby bird burgers that you then have to steal from the other patties to make it a normal size).  I did take one of the burgers and break it up to three slider sizes because I was making it for my daughter.  That’s why you’ll see that in the pics below. 🙂  I then take the section of meat out and flatten it out as thin as I can possible get it without it breaking.  I pat it down with my fingers on a plate to flatten it even further.

Also, we took one of the patties out to the side to jazz it up for my husband – we added bits of apple and bacon to it.  Cuz we get CRAZY in this house 😉 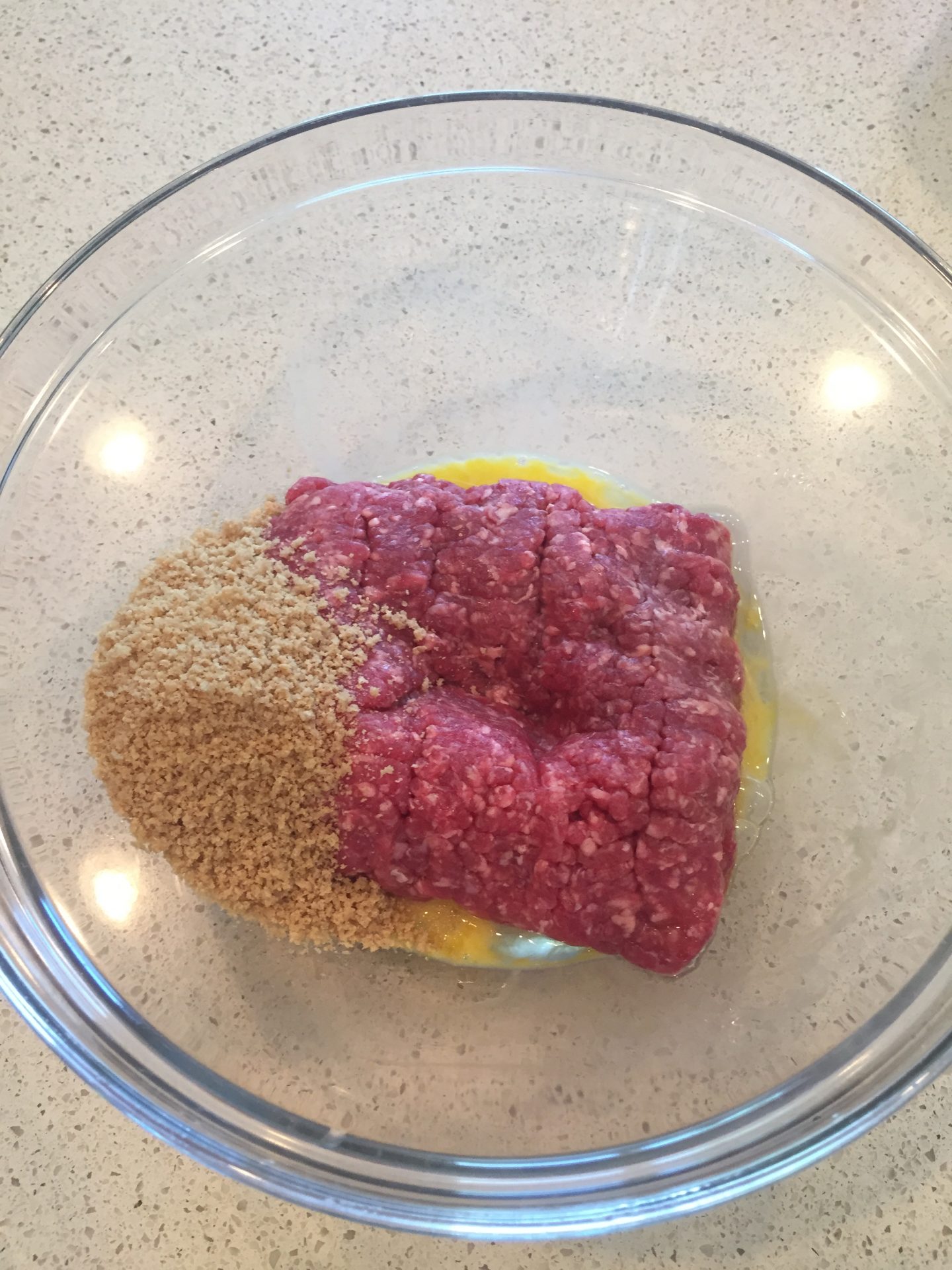 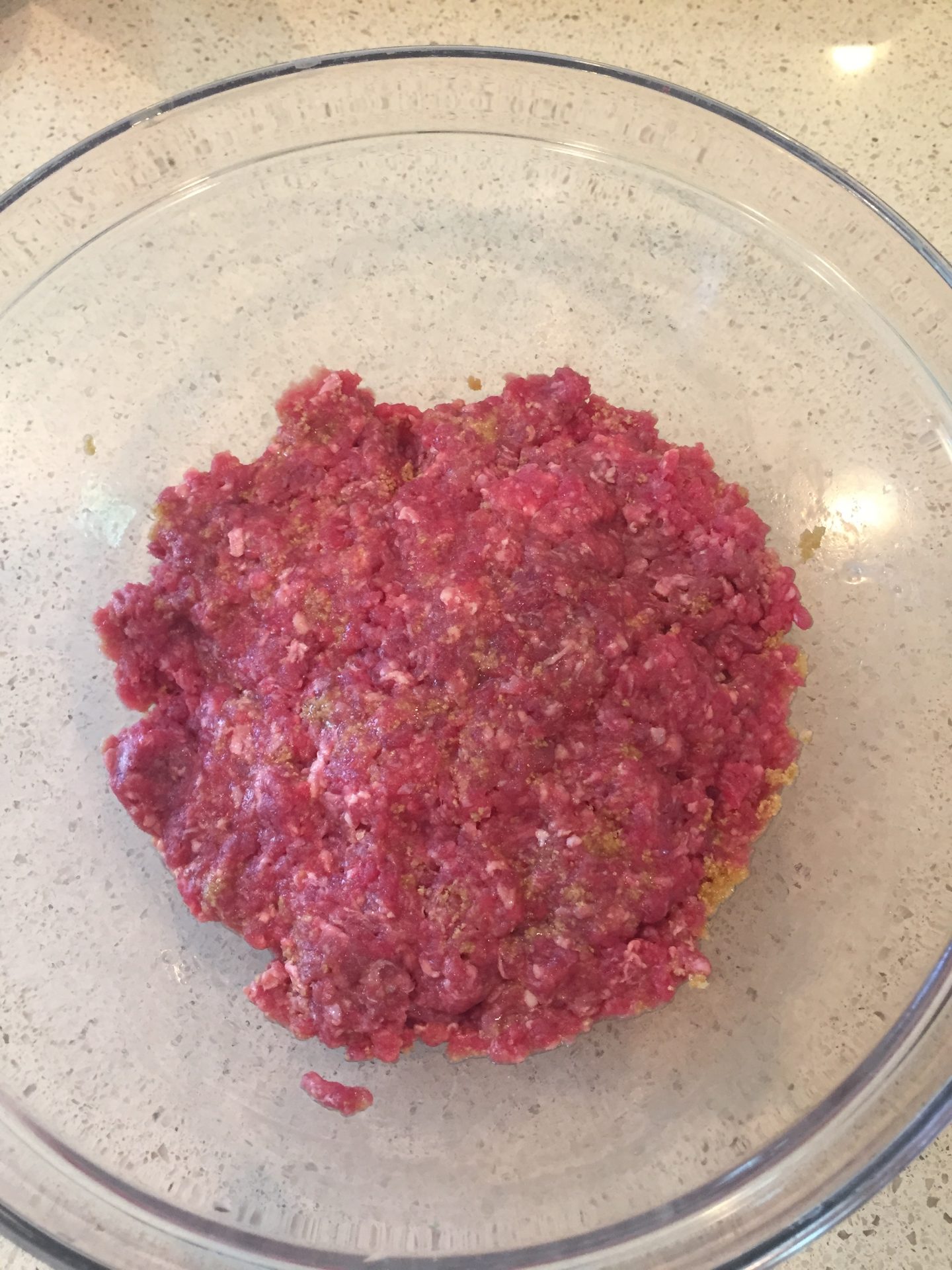 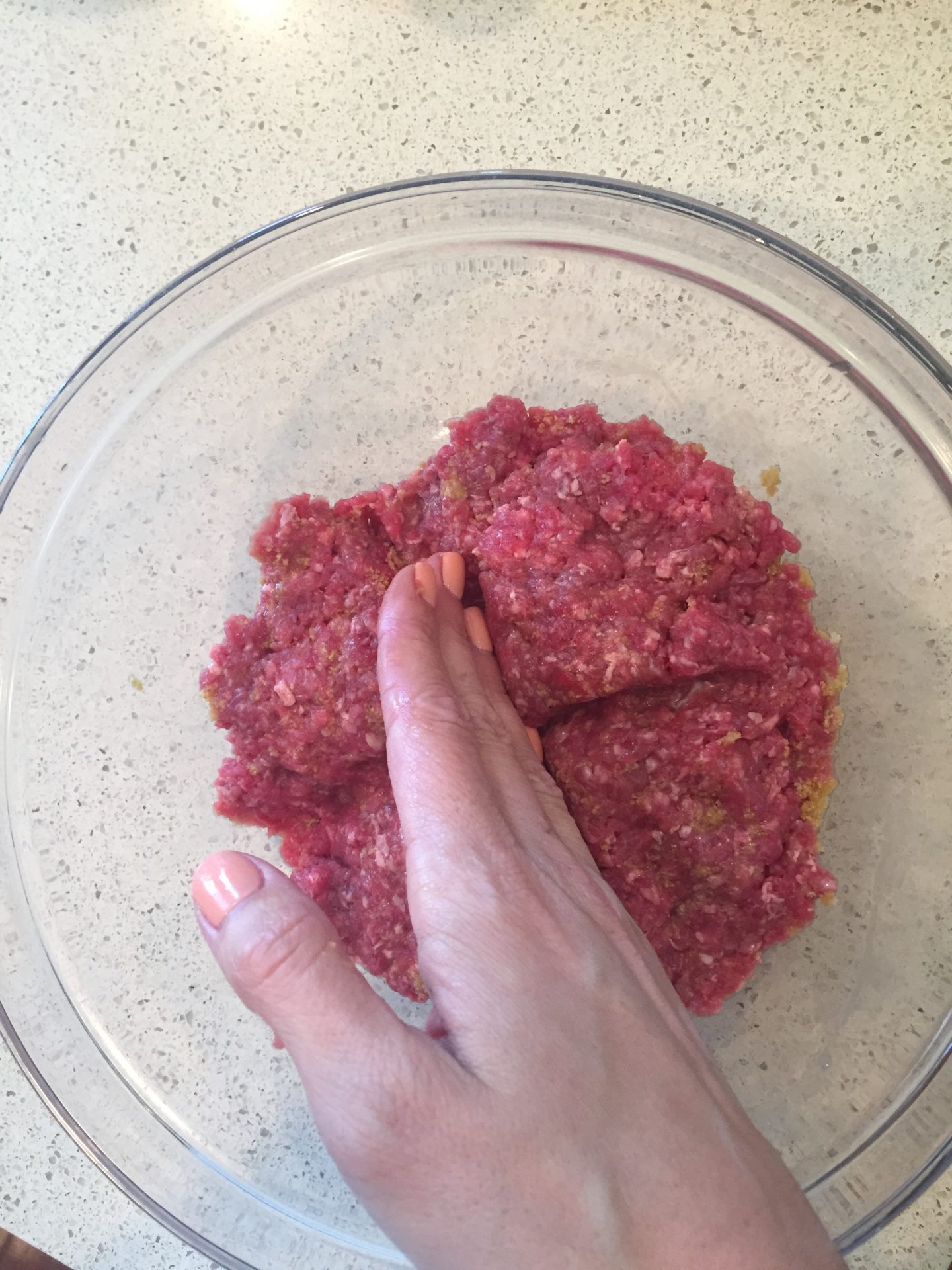 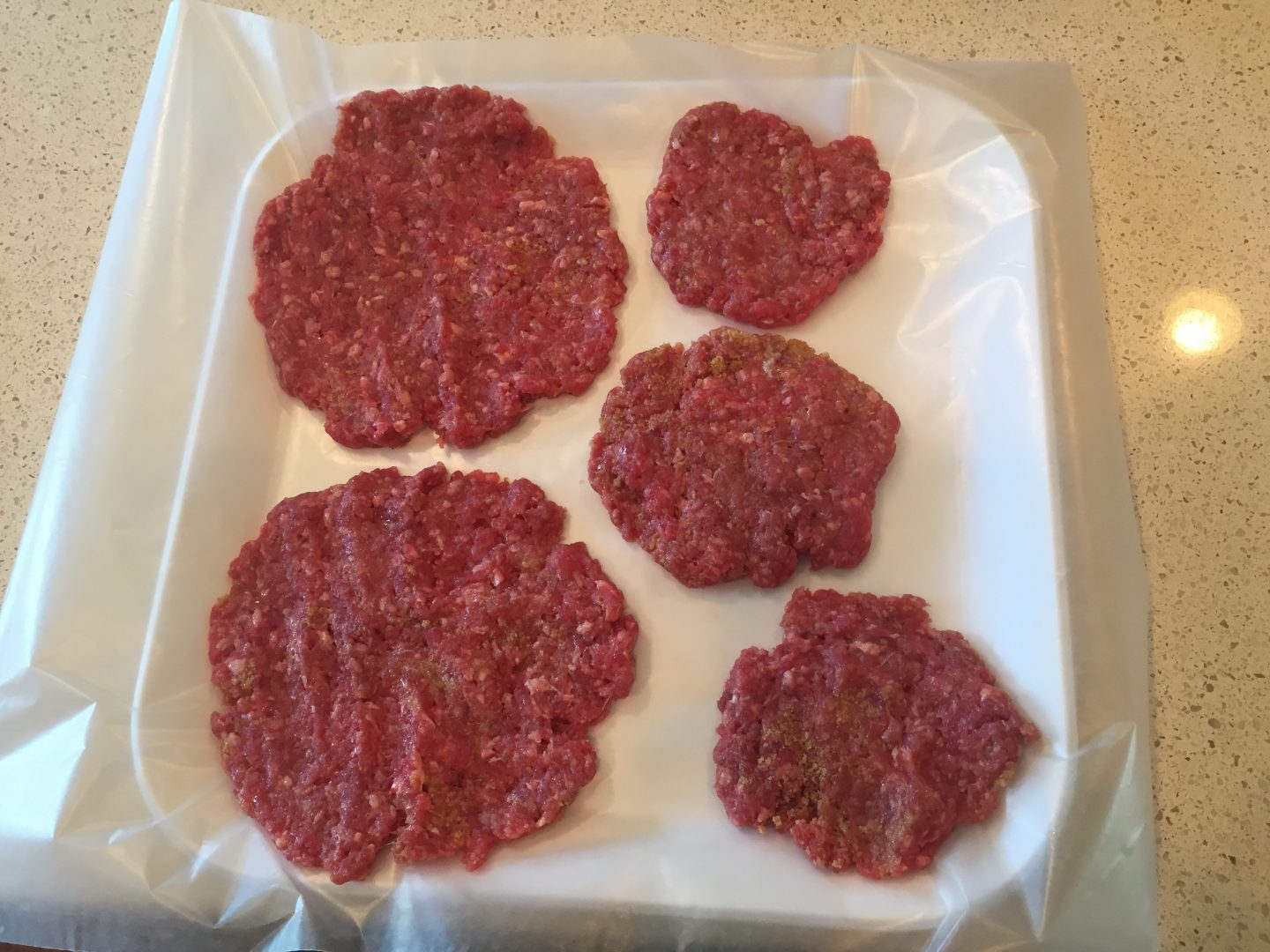 Another thing I’d like to note is that burgers (and all meat, actually) cook better if they are room temperature.  So I make the burger patties up at least 15 minutes before I actually cook them – regardless of if I’m cooking them in the cast iron skillet or grilling them.

So when I’m ready, I pre-heat my cast iron skillet on medium high.  I get that bad boy nice and hot so it sears the meat well.  I happen to have a HUGE cast iron skillet and a small one (and you’ll see the trick I use because I have both)… but if you only have a smaller one, you’ll probably need to make the burgers in batches.  Just keep the ones you’ve already cooked in the oven at like 225 degrees so they stay warm but don’t overcook.

I either spray the pan with olive oil cooking spray or put a very very thin layer of olive oil in the pan.  I season the beef with coarse black pepper (I really like this “Smokehouse black pepper” by McCormick that you see in the picture – it’s not spicy, it just gives a smoky flavor to it) and kosher salt.  I like the coarse pepper and kosher salt because they’re larger grains and I feel like it flavors the meat better.   So I season the top and that’s the side I put down in the pan (so I can then season the unseasoned side of the meat).

Now, this next step you totally don’t have to do, but I find that it flattens the burger patties out more and makes them thinner and gets a better sear on the meat.  I take another cast iron skillet that’s smaller and fits inside of the big cast iron skillet.  (You could alternatively use a regular skillet if you don’t have two cast iron skillets, and weigh it down with some beans or pie weights).  I put some parchment paper on top of the burgers and smash them down with the cast iron skillet and let them cook on that one side that way.  Cast iron skillets are really heavy, so it really levels out the patties.  Again, you could adjust or omit this step entirely, it’s just how I’ve been able to get the thinnest burgers.

I cook the burger until I see the edges turn color and flip it over.  It’s at that point that you’d add any cheese.  I usually tent the pan with a little aluminum foil to seal the heat in and get the cheese to melt quicker.  It only takes a few minutes, once the burger is flipped, for it to cook through. 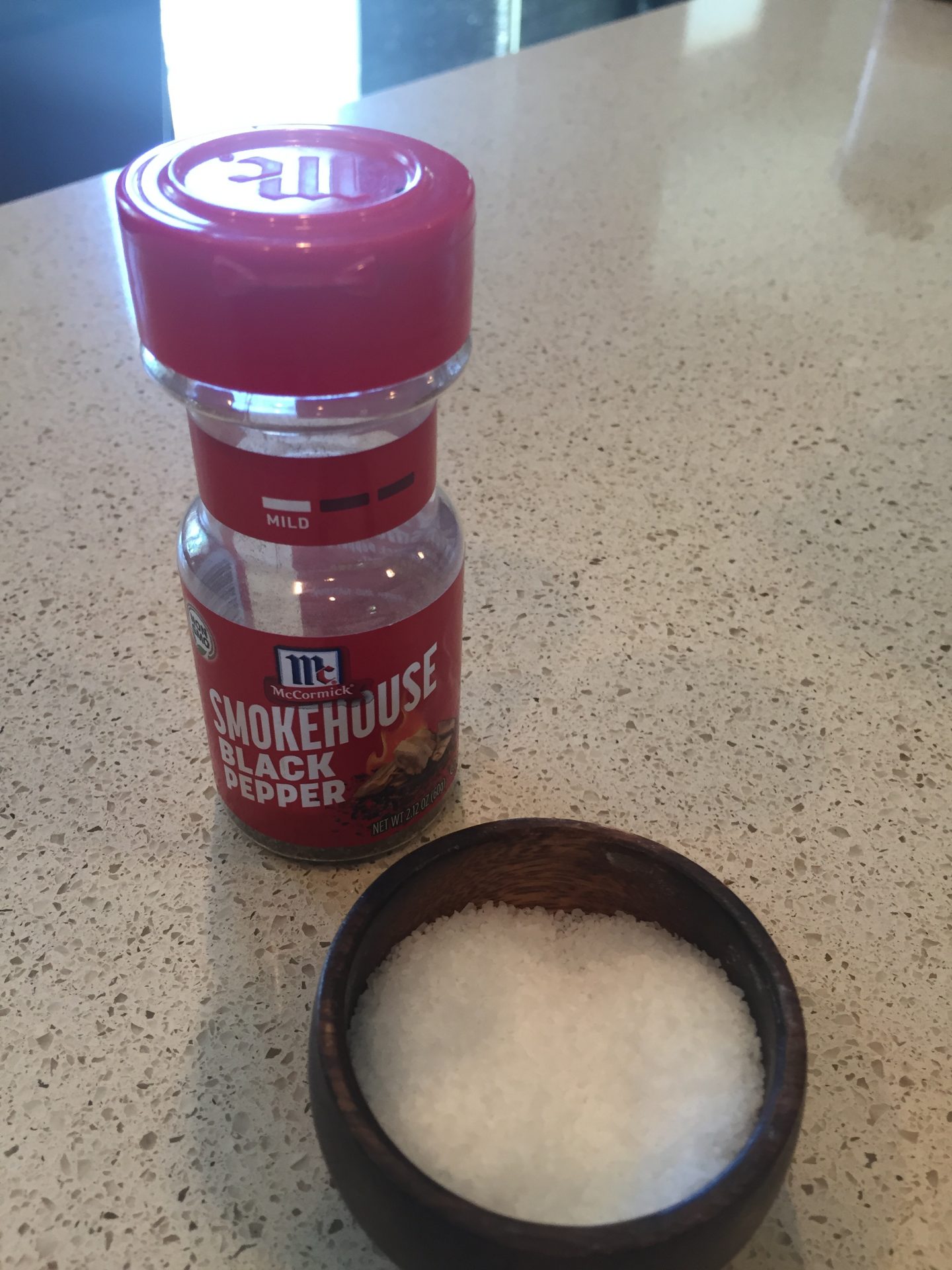 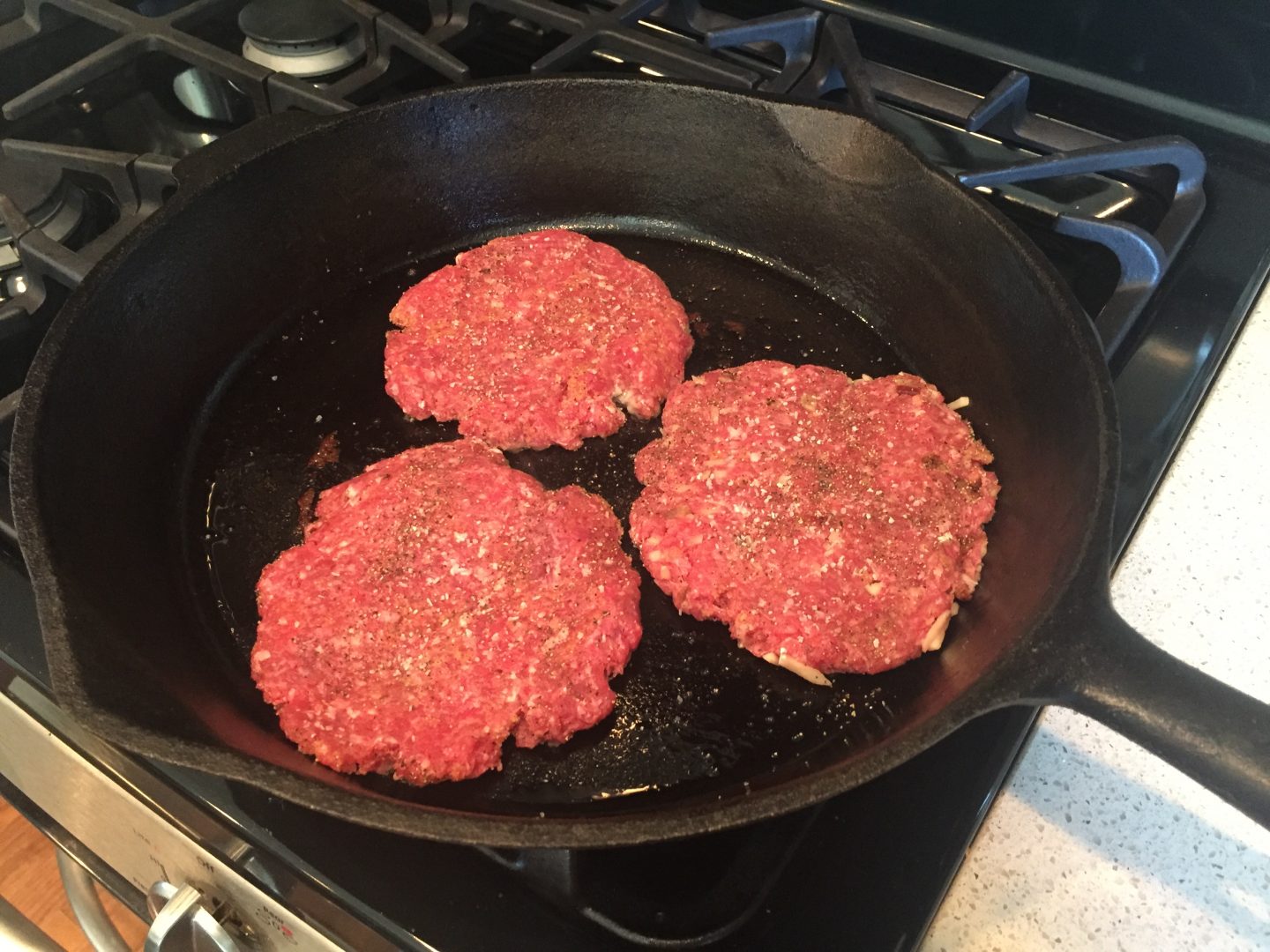 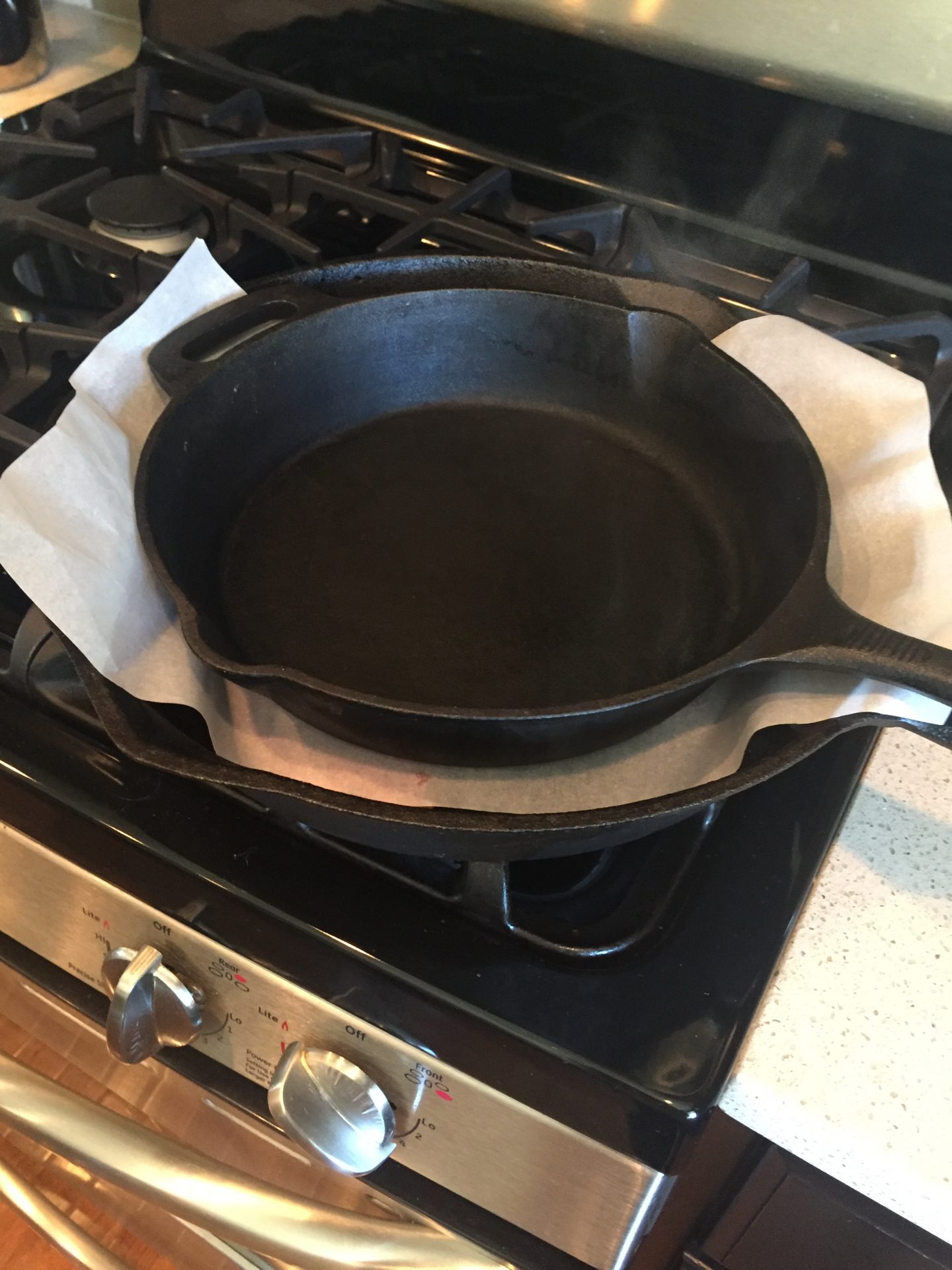 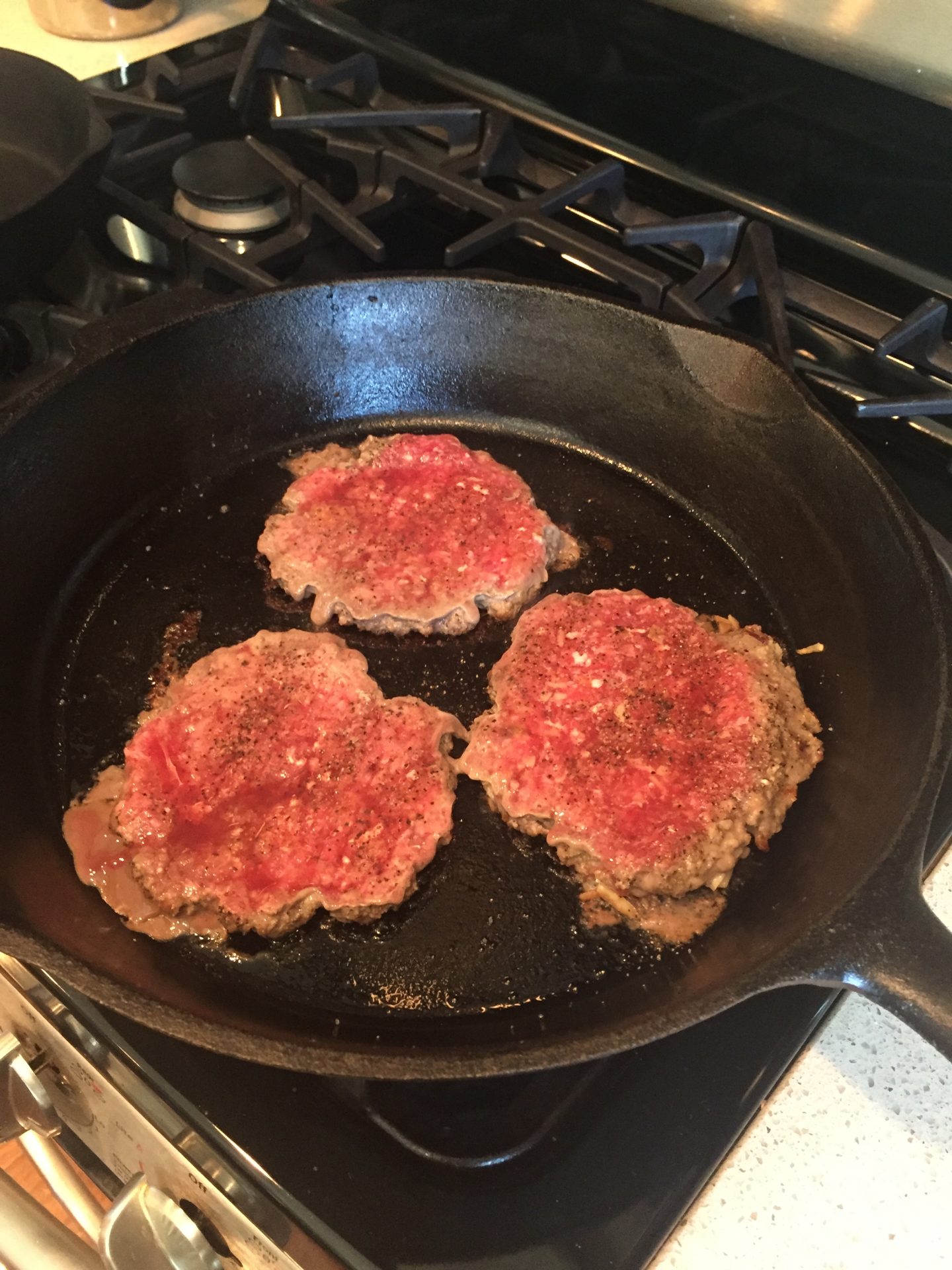 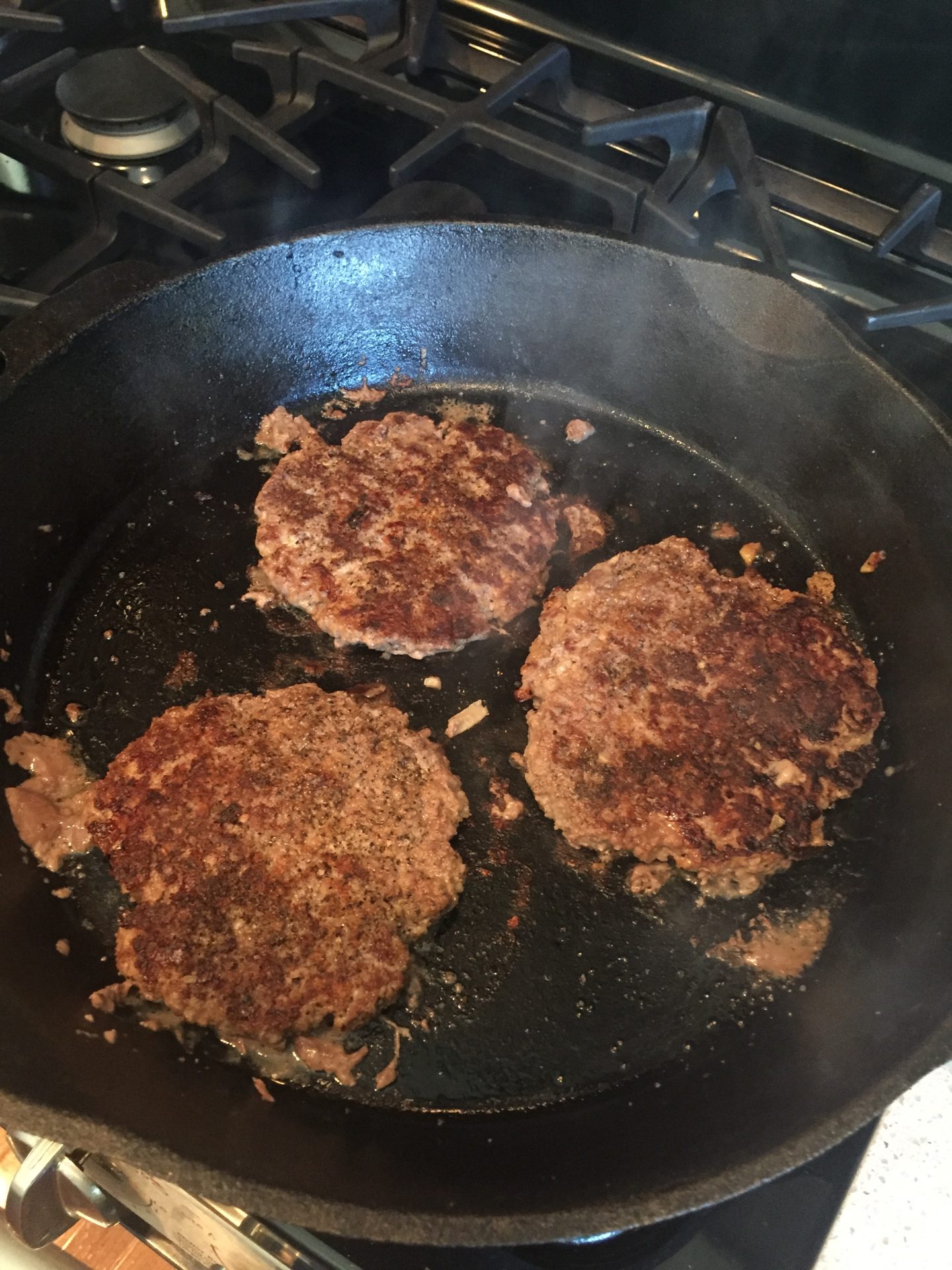 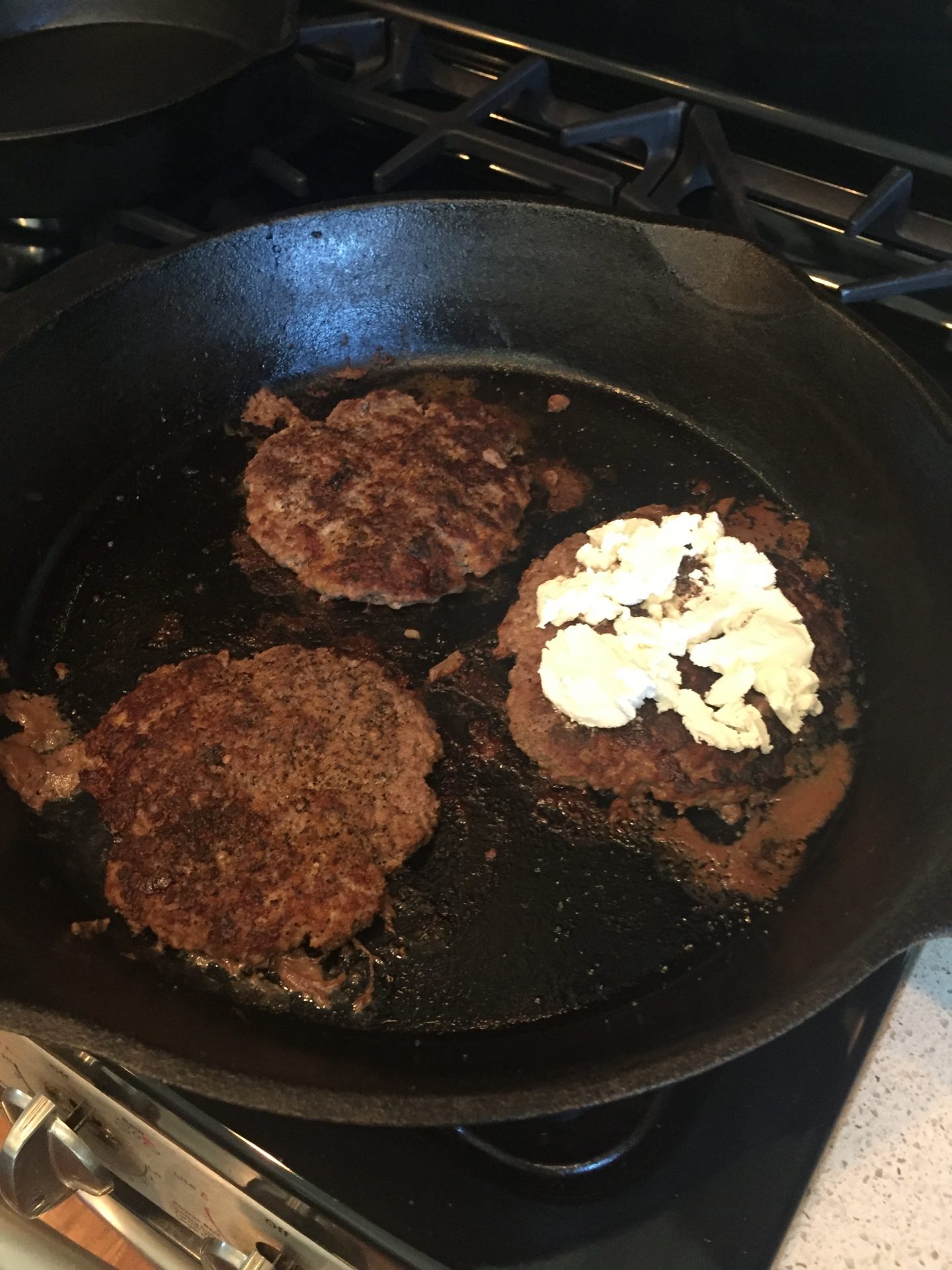 (I cooked Isla’s sliders prior to our meal – normally I do 4 regular size burgers in the pan.  Eric’s is topped with goat cheese and we left the other two plain cuz I’m a weirdo and don’t put cheese on my burger.  Cheese and I are in a really serious relationship, and I’m almost afraid to add in to another meal of mine.  So I just settle for topping my burger with bacon, since I don’t eat any veggies/sauces on my burger).  So below is OBVIOUSLY a photo of Eric’s (“normal person”) burger.  We love using Brioche buns with burgers and he had some spinach and tomatoes to top his.  I made those little oven potato chips similarly to my  oven roasted potato wedges recipe.  Hope you enjoy this meal as much as we do!  These burgers are thin but still juicy and delish! 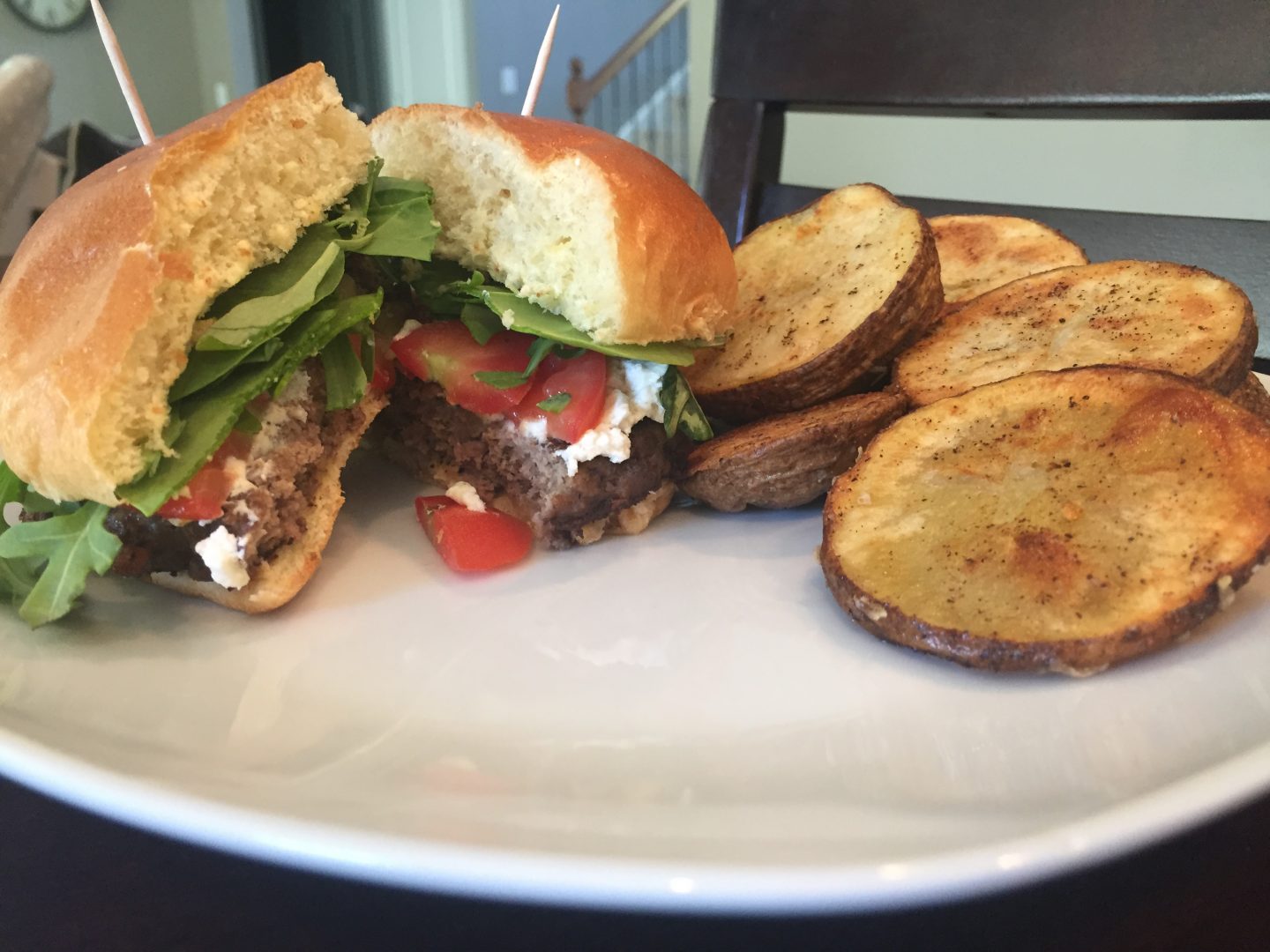