Let me count the ways I love thee.

I know to some, it may seem silly to write an entire blog post about bacon… but for me, bacon is pretty much part of the food pyramid.  You see, I have my dad to thank for this addiction.  As a child, any time he packed my lunch for school, he would incorporate bacon that he’d cooked that morning as my “lunch meat.”  Best. Dad. Ever.  So it became part of my repertoire and I’ve never really tired of it.  In fact, I eat it with breakfast almost every single day and will find a way to incorporate it into many of my recipes for the other meals of the day.  A general slogan of mine is “everything is better with bacon.”

Have you ever heard that adage about how if you put bacon grease on dog food, it’ll make your dogs coat of hair shinier?  If that translates to humans, I should totally be set.  (I’d hate to see what my hair would like if I DIDN’T have so much bacon in my diet.  For this reason alone, I should continue consumption.)

Anywayyyy… With so much bacon cooking going on in our house, it’s necessary to find the quickest and most efficient way to cook it.  Plus, as much as I love the smell of bacon, I don’t like the house being stunk up for the entire day, so need something that offsets that.  Any possible way there is to cook bacon, I’ve done it, I assure you.  And it winds up either smoking up the house, being undercooked, unevenly cooked, etc.  I want my bacon, but I don’t want to put in that much work.

So I use this handy dandy bacon cooker that my dad has been using for YEARS!  I own two of them now, so I don’t have to worry if one is in the dishwasher. 😉 I told you. Addicted.

All you do is hang the bacon over these little T-stands, cover it with a paper towel, and throw it in the microwave for a couple of minutes.  The more bacon you put on there or the thicker cut it is, the longer it will take to cook.  This morning, I cooked these 7 slices in about 3.5 minutes. (It was thinner, center cut bacon so it cooks a little faster).  And all of the grease just falls to the bottom so it’s super easy to clean up.

To clean, simply dump the bacon grease in a jar (don’t put it down your garbage disposal, it’ll clog your pipes and isn’t good for the blades… and even if it sounds good in theory, DON’T try immediately dumping it in the garbage, it’ll melt the bag.  And then you’ll have a whole ‘nother mess. I learned this the hard way, on behalf of anyone who reads this post 😉 )

The link to it is HERE.  They also usually carry it at Wal-Mart near the appliance section.

*Note: I do not have any association with this heavenly bacon maker contraption company.  I just want to share the love. 🙂 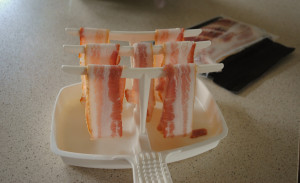 Don’t overlap the bacon and just hang over the t-stands. Cover with paper towel 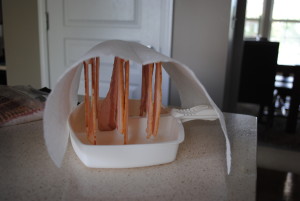 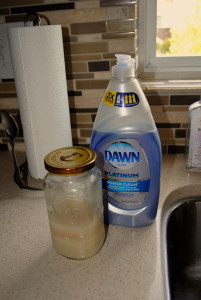 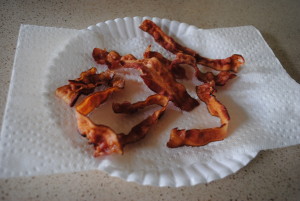