Happy Memorial Day Weekend, everyone!
I have a really cute and affordable outfit to share with you today – but we will get to that in just a minute.

I had every intention of posting this earlier in the day but there has been a pest company in our house spraying every inch of it, and trying to keep both the baby and the doggie from being contaminated, I haven’t gotten to sit down and do anything yet.

So let me lead off with this – I HATE SPIDERS.  They scare the sh*t out of me.  I don’t say this lightly.  I don’t remember having this phobia when I was younger, but something in my old age has me terrified of them.  A couple of years ago, I saw one (so large that I would say it was a tarantula’s newborn) crawling above my refrigerator.  I tried to murder it, fearing for my life.  It was going to be one of us, and I decided I wanted to fight for my life.  I figured I had an edge on this guy.  I was bigger, probably smarter, and hopefully stronger (though I wouldn’t say I’m exactly a body builder and only now have arm strength since having a child to carry around, so it could be a toss up).  But one of us was going to make the first move, so I grabbed a huge wad of paper towels (maybe my first mistake, I probably should have gone with a sledge hammer), got on a bar stool, and decided to take this spider’s life.
Here’s what I learned from this altercation

If you can’t tell, I did not kill said spider on this attempt.  What happened instead was that I basically smacked it.  Like a little slap, if you will.  He then fell under my refrigerator, where I came to believe he was gathering his strength for his next move.  I immediately ran upstairs, slammed the door (obviously to keep mr. spider out), and got under my covers in my bed.  I called my husband and told him he needed to take off from work and come home and find the spider and kill him.  He LAUGHED at me, told me he couldn’t but when he got home from work, he’d look for it.  WHAT?!  That was 4 hours from the time of this call.  I’d surely be eaten by the spider by then.  I told him that I knew the spider was gathering his strength and now he was going to be really angry at me for slapping/trying to murder him, and he was probably having babies (does this logic hold with what I’m calling a male spider? I don’t know.  I’m not an entomologist, ok?!) just to grow a pack to come and take me down.  That they’d forcibly open my bedroom door, with the droves of them, and take me out.  He continued to laugh at me (like this was something he wasn’t taking seriously) and tell me it was all going to be ok.  I (quite rationally) told him that he needed to call an exterminator to come over if he wasn’t going to take care of it/my life.

The long and the short of it is that he found the spider under the refrigerator when he got home that night.  He was like mostly dead but not 100%.   And when the pest people came by the next week trying to sell us on the treatment, he looked at me and said, “happy anniversary honey, this can be your present.”  Gosh, he’s funny. (I mean, he usually really is, but he apparently doesn’t take these life and death scenarios quite as seriously as I do).

So anyway… now you can see why I had to be very aware of my surroundings today with the pest people, just to be certain that they were taking care of every inch of our home that the deceased baby tarantula’s family could live.

Below is my outfit of the day =)  I’ve been asked to put up more pics for different angles, so bear with me, since I find taking these photos incredibly awkward, but want to show the outfit off!  Also, it was raining when my husband and I tried to squeeze in these pics, so the angles and lighting and such is really on point ;).

This shirt is so affordable ($15), my earrings are a dupe for ones three times the price, and my shorts are a great summer staple to have — they are super stretchy and comfortable.  I like to half tuck the top to give it a little more shape.  Links to all of my outfit below! 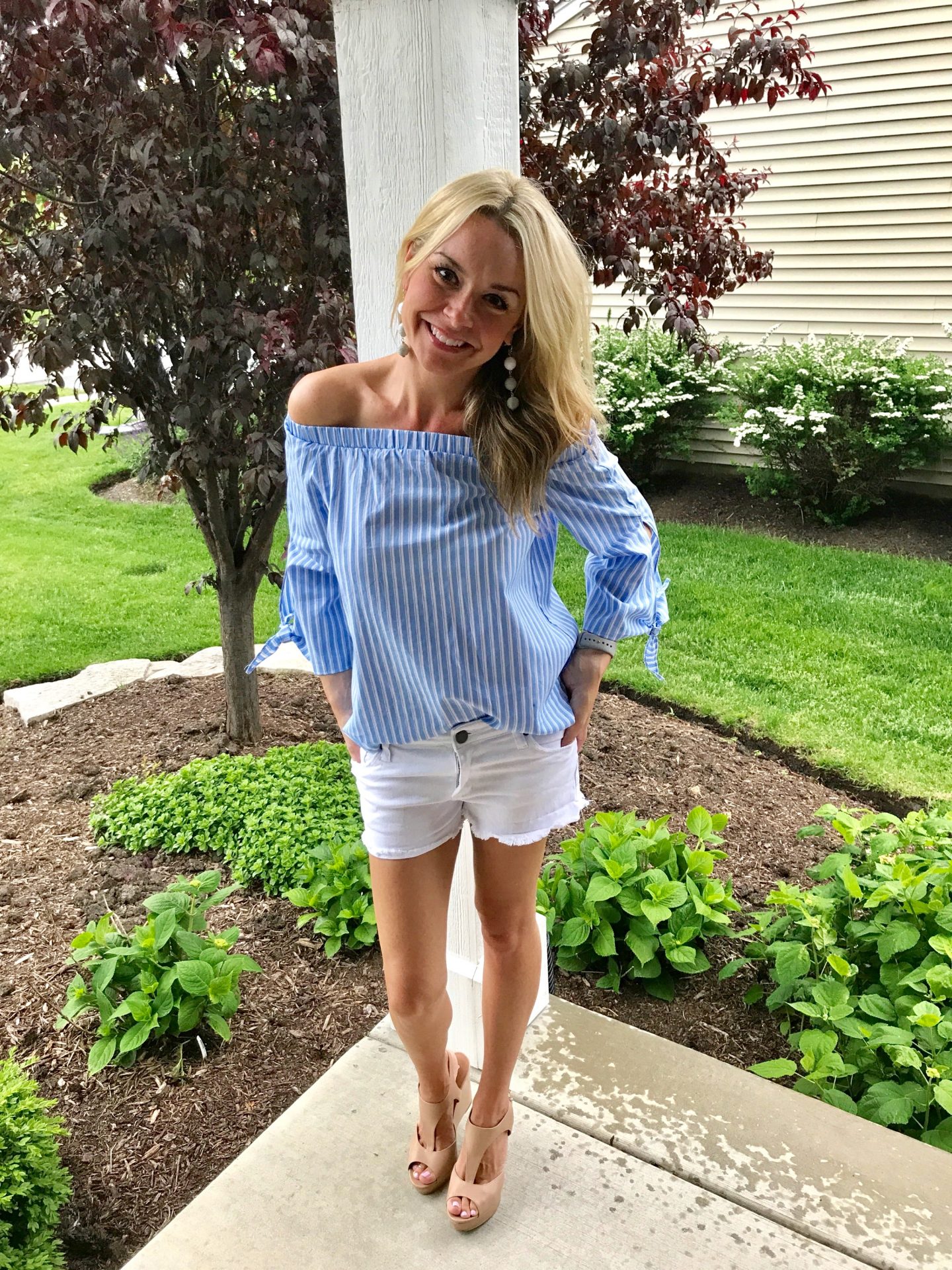 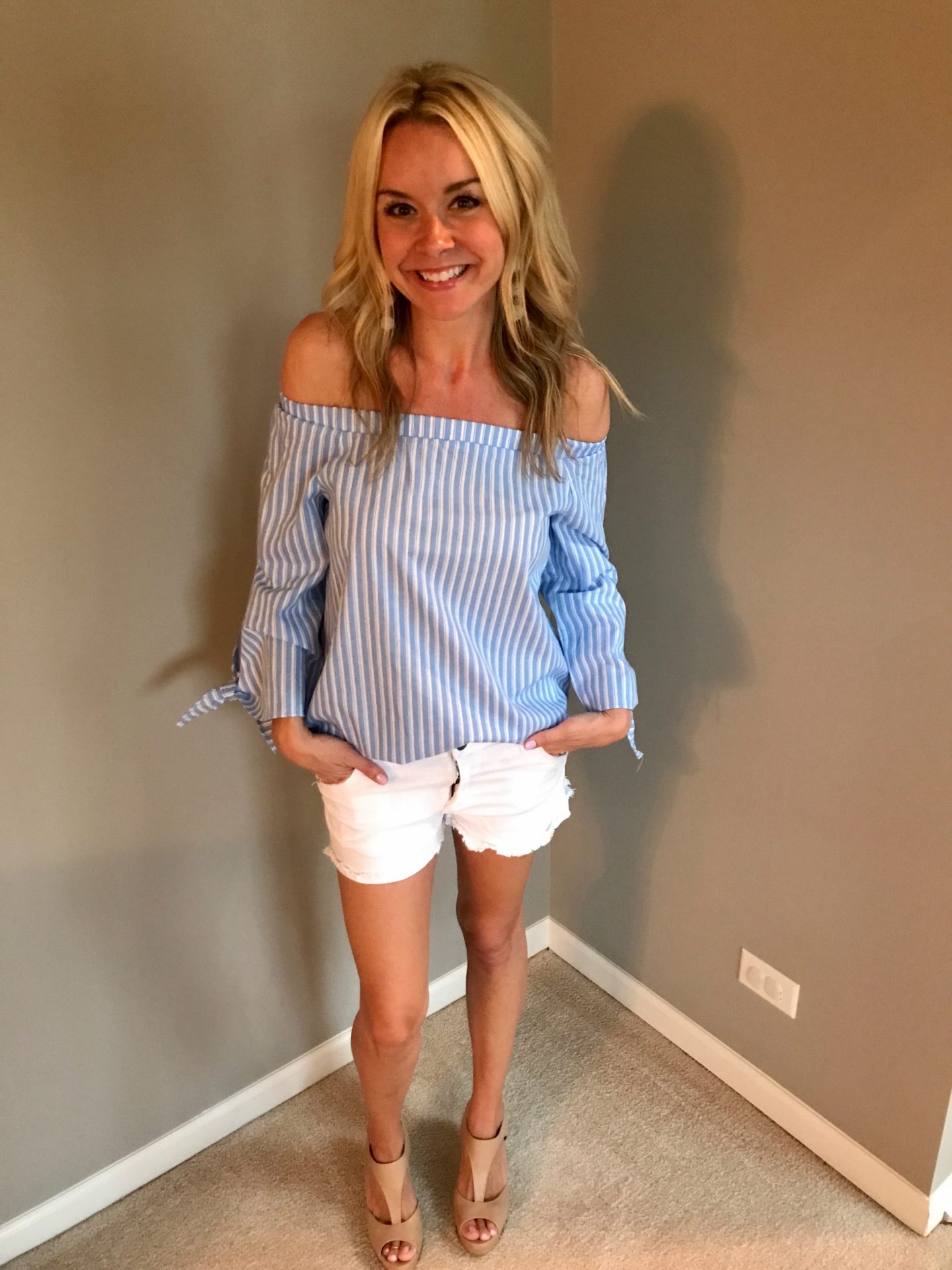 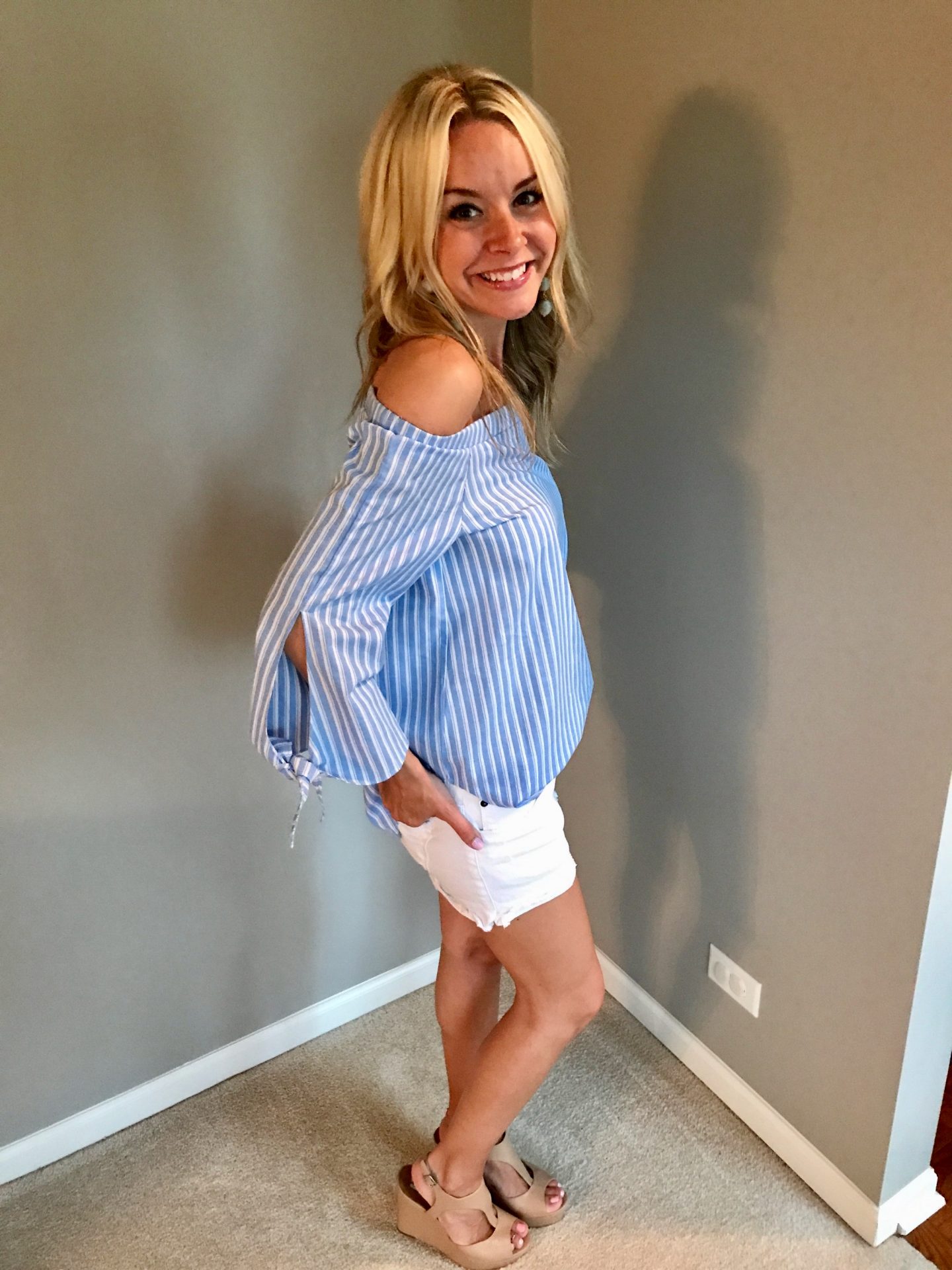